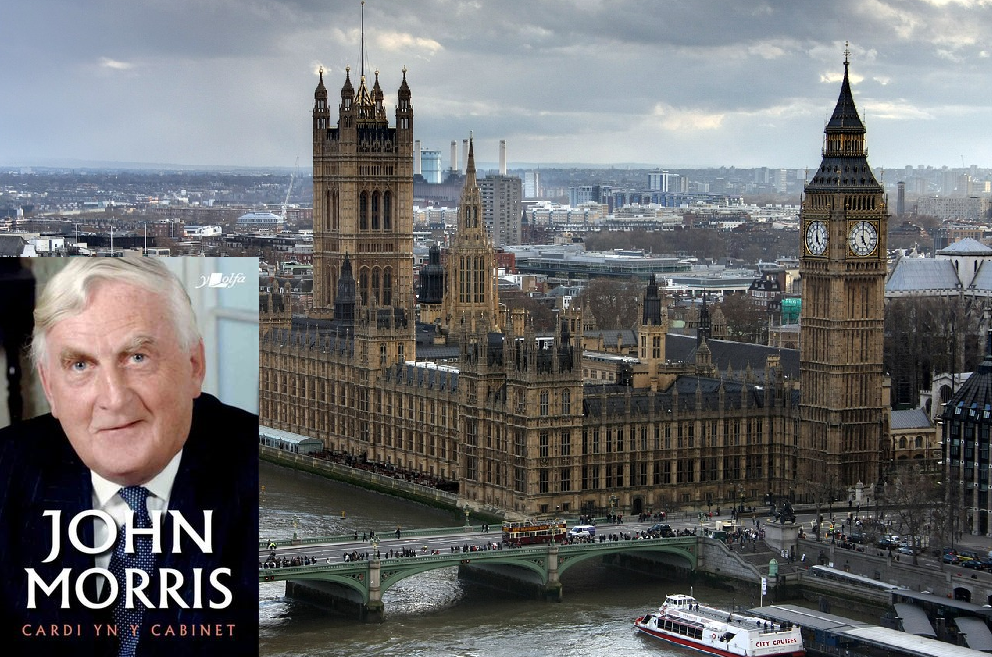 Now well into his eighties John Morris, Baron Morris of Aberavon can take the long view back over sixty years in politics, which included a very long stint as Aberavon’s M.P., spanning the years between 1959 and 2001.  This makes him the longest serving Welsh Parliamentarian.  As a member of both the House of Commons and, latterly the House of Lords, he worked under no fewer than ten Labour party leaders, from Hugh Gaitskell to Jeremy Corbyn. He was also Secretary of State for Wales.  This book, which, in a sense updates his 2001 autobiography ‘Fifty Years in Politics and the Law,’ finds the man described by the Guardian’s Michael White as a ‘wise old bird who has seen a great deal in a long, tenacious career’ questioning the need for such a job.

In the closing section of ‘Cardi yn y Cabinet’ he suggests that the post has fully outlived its usefulness, being nowadays little more than that of a lobbyist. In his day Morris had three thousand people working for him in Whitehall and in Wales and surmises that now the Welsh Secretary has something of the order of thirty, a decline which mirrors the decline in powers which remain to the title holder.  John Morris suggests that the time may be propitious for ministers in Cardiff and Westminster to talk directly to the each other, especially between the Welsh Government and the Treasury and get rid of any influence the Secretary of State might have.

This brisk little book is at its best when it ponders the decision-making processes of Government, and that through the lawyer’s eyes, not least when those decisions are profoundly challenging, such as authorising the use of armed force by the British military during the period of Serbian ethic cleansing in Kosovo.  Morris was then Attorney General.  This period gave him grey hair, he maintains.

‘Cardi…’ also charts Morris’ own contribution to the Welsh devolution process.  Indeed , he describes his life’s work , from 1953 to 1998 as being one of ‘contributing to the creation of the architecture of devolution’ and persuading fellow Cabinet members to support it, even if he failed to win the backing of many fellow MPs.  Losing the first referendum on devolution was personally awful for him, and he writes that it took him years to get over the disappointment, not least because he had been doing the groundwork for the legislation necessary for a separation of powers between Wales and Westminster.  He is at pains to underline that devolution was a Labour creation yet makes sure to thank all the parties for ‘bringing the ship safely into harbour after a tempestuous voyage.’ He now thinks that it is time to take stock of what has been achieved so far in Wales.  As for Scotland he questions the wisdom of building a house on the sand as he puts it, or rather, on what he sees as dwindling North Sea oil revenues and objects to SNP politicians getting involved in Westminster decisions on matters which are devolved to the Scottish parliament.

The book also chronicles his life’s journey, from a challenging upbringing following the death of his father which left his mother to look after three children under the age of seven.  Little wonder his grandparents were an influence and looked after him during the week as he attended school.  His grandmother was a suffragette and enthusiaistic fund-raiser to allow women in Ceredigion to join the nursing profession.  His grand-father was an old collier and political speech-maker who had returned to west Wales to farm the land.  One of John’s cousins is Baroness Symons, the two of them being descendants of lead miners in the Cardiganshire hills, while a more surprising cousin, perhaps, is Jacob Rees-Mogg, M.P.

Growing up, John Morris only knew Liberal influences in Ceredigion but on going to college and meeting young men and women from many other backgrounds, he decided to join the Labour Party at the age of twenty one.  His contemporaries at Cambridge included many future MPs as well as the historian of the Spanish Civil war, Hugh Thomas and the Observer political journalist Alan Watkins, while other formative influences included a spell in the Army, serving in the Welsh Fusiliers and being posted to Germany.

With Port Talbot in his constituency Morris’ political life was often bound up with steel, and he oversaw the White Paper instigating the nationalisation of the industry and later had to fight closures in the plant. He learned much under the guidance of such Labour stalwarts as Barbara Castle, then his boss at the Department of Transport and under a range of leaders.  One of the most painful aspects of being a politician was losing out on his children’s upbringing, which he had to entrust to his wife Margaret.   Her serious illness was another of life’s trials.

The volume charts the journey of a man who is a countryman at heart into the corridors of power and then back again into a retirement in Wales.  His assessments of those he met on the journey are often blunt and to the point.  He lists James Callaghan’s failings – a paranoia about the left, the  ‘reds under the beds’ who were out to unseat him, and a tendency to listen too much to his staff.  Harold Wilson was ‘one of the cleverest men in politics in this age,’ while Jeremy Corbyn is criticised for promising things that would extend the national debt, or lead to increased taxes.  Tony Blair is noteworthy for not ever having much to do with Morris, at a time when he was Attorney General and their relationship was a cold one.

But this is not a dishing-out-the dirt sort of volume, but rather that of a man taking stock, leaving it to historians to ponder the significance of such contributions as a document he prepared in the early sixties arguing that the status of forms or minutes in Welsh should have the same status as ones in English.  Alongside his work in creating the Development Board for Rural Wales and bringing the Ford plant to Bridgend it suggests that here is a man who always remembered his Welsh roots, the small farms such as Bwlch and Ffos-las which made him love the land in the first place.

Cardi yn y Cabinet by John Morris is published by Y Lolfa and costs £ 7.99. You can buy it here.

Any idea if an English language version will become available?