Review: Towers of Defiance is both a guide to the castles built by native lords and princes and a history of the times

This book is a corrective to the idea that a Welsh castle is one built here by invaders, “the magnificent badges of our subjection” as Thomas Pennant put it. It is both a guide to the castles built by native lords and princes and a history of the times in which they variously ruled, fought off Normans and English alike, or simply fought among themselves. That disposition towards infighting was exploited by the likes of Henry I who promoted a policy of divide and rule.

One of the other faultlines, where neighbour fought neighbour or son fought father was caused by the Welsh law of partible inheritance, in which the ‘lands of the deceased would be divided equally between all make heirs, even illegitimate ones.’ It led to kingdoms fragmenting very quickly, especially if a ruler had two sons who in turn had their own couple of sons. Meanwhile kingdoms such as Deheubarth, Powys and Gwynedd jostled for position at a time of brutal warlords, landgrabs, cattle rustling and raiding.

The first part of the book sketches out in great detail the historical backdrop to the building of what might be a grand total of 700 medieval castles that pepper the Welsh landscape. It looks at the thousand or so iron age hill forts that first commanded the high lands and the simple, native fortifications known as ringworks which predated the coming of the Norman castles, built to stamp their authority.

The Welsh were a tad slow to see the value of a such constructions, copying the wooden forts of the Normans long decades after 1066, before graduating to building with stone. Cadwgan ap Bleddyn was the Welshman who first constructed a Norman-style castle in Welshpool.

Building then, as now was a costly business and so Llywelyn the Great’s relatively simple castle at Dolwyddelan might have cost £ 200 at a time when his entire annual revenue from all of Gwynedd was only £ 3,000. Llywelyn wasn’t alone in investing in masonry: Lord Rhys in south Wales built Cardigan castle, and celebrated its completion by holding a prototype eisteddfod on the site in 1176 while other war-worn fortresses were also refurbished, although the records are scant.  The Welsh, as they attacked castles found features to include in their own, such as rounded twin towers near the gate but they could not compete with the coffers and manpower available to English kings such as Edward.

The second section of the book is given over to the architecture involved, examining the logistics of hewing and transporting stone and the working patterns of the labourers.  Lacking in money, the Welsh princes couldn’t build great edifices in little time.  They often built the central tower or towers first to offer protection to those building the outer walls, as at Dolforwyn in Powys. These might often be to a pattern which amalgamated two types of tower, both square and round, resulting in what is known as an apsoidal tower, resembling an elongated letter D.

The final third of this painstakingly researched book is perhaps the most revealing and the one most likely to send one out on castle-seeking adventures.  The gazetter of sites has a simple taxonomy, so we have the castles of the princes of Gwynedd, such as Deganwy, Criccieth and Castell y Bere, followed by those of the princes of Deheubarth such as Dinefwr, Dryslwyn and Nevern. Then we have detailed accounts of the castles built or owned by the princes of Powys including many which are little known such as Bodyddon near Llanfyllin, Cymer near Dolgellau and Tafolwern.  Throughout, the fact-filled pages are graced by superb new drone photographs of the various sites, which give you both a raven’s eye view and a chance to appreciate the way the castles often use geography and geology as lines of defence, which explains why so many of them were built on top of previous erections or on humps and hills.

The final section is a litany of lost sites and lesser castles including Castell Cadwgan which was lost to the sea and Castell Brogyntyn, over the border near Oswestry as well as a listing of ‘castles of the lesser dynasties.’ It includes the evocatively named Castell Nos, Castle of Night perhaps, near Maerdy, which sits on a great hump of rock surveying the deep river cuts of the Rhondda Fach. It’s located on the cusp of two commotes, Glynrhondda and Meisgyn and is well worth a visit. Its location is striking, a vantage point for a Welsh leader to take stock of his upland holdings. There is little left of the castle itself but it’s one of the many sites you might decide to visit having been prompted by this book, which is clearly a labour of love and endless, meticulous research on the part of its castle-adoring author. These are our castles and here is a lavishly illustrated handbook to their wind-humbled constructions and dissent-riven stories.

Towers of Defiance: The Castles and Fortifications of the Princes of Wales is published by Y Lolfa and you can buy it here…

Great, now I know what I’m getting myself for my fast approaching penblwydd…

Job done…bought and paid for!

Thanks for the heads up and the good reviews below…

The reviewer almost overlooked one fundamental aspect of this book.

It contains the author’s own photographs, plans, maps, line drawings and ink & wash (I think) illustrations. There are a lot of them, distinctly adding to the pleasure of turning each page.

It’s interesting to see the suggestion concerning the gazetteer. I’m just nearing the end of the historical section and, like the reviewer, have already determined to wander these hundreds of places whose existence I’d never known. 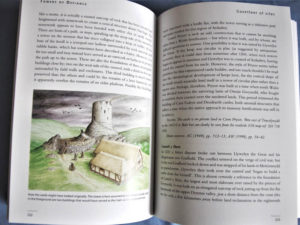 With apologies to N.C for filling up server space, I thought the contents page might be useful too. Note the size of the gazetteer — that’s a lot of picnics: 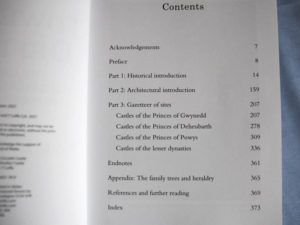 Castell-y-Bere: un o’m hoff gestyll i hefyd – er bod digonedd ohonynt yn Sir Benfro, ble dw i’n byw! ~ Castell-y-Bere: one of my favourite castles too – even though there are plenty to choose from in Pembrokeshire, where I live!

Even the Welsh ones oppressed the locals through wealth.

CADW: celebrating all defeats of the Welsh.

Even the heritage body is saying so.

It’s an excellent book, both content and visually. The reconstruction drawings, not just of the obvious ones, but smaller and lesser known castles, are superb. A recent visit to Castell y Bere was improved greatly with the background knowledge from the book, I’ll be visiting a lot more for sure. Gwych iawn.

I bought this book because of the good reviews. I started to read the first part being a short explanation of Welsh history. I now regret buying the book. His appraisal of our history is the same old garbage from an English perspective. To illustrate, he refers to Edward 1 as “the great warrior king” I am as upset by this description of the person responsible for the loss of our freedom as a person from Poland describing Hitler as a great man
Do not buy this book it’s insulting and without sympathy to Welsh feelings.