Spider-Man: Into The Spider-Verse – Film Review 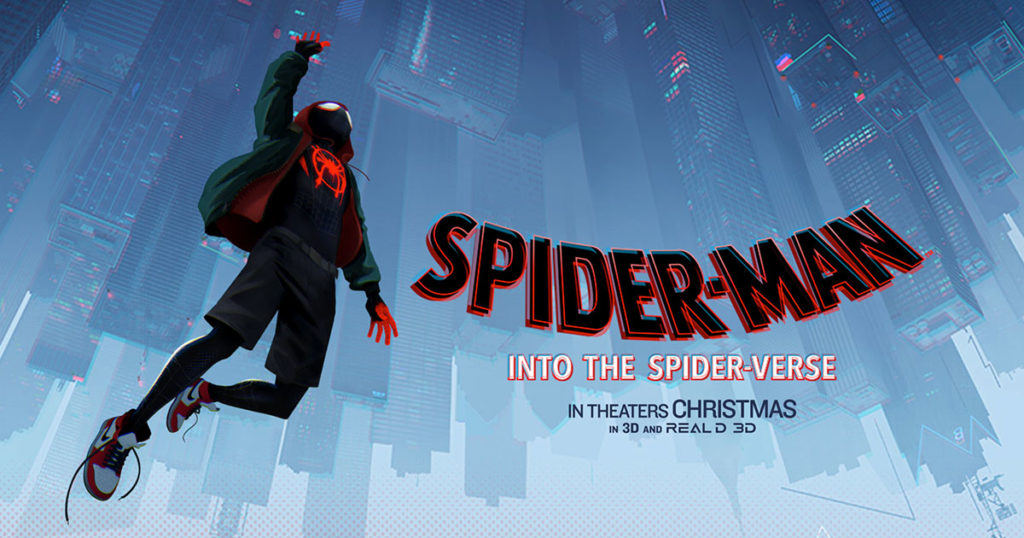 ‘Thwip and release, thwip and release,’ prompts Peter B. Parker (Jake Johnson) teaching a young Miles Morales (Shameik Moore) to web-swing through white powdered pine trees as they flee an in-pursuit Doc Ock (Katherine Hahn – that’s right, an inspired female Octavius). This astutely observed and delectably realised in-joke to the Spider-Man canon (more like armada with its rich history) is as apt a metaphor as I can mine from Spider-Man: Into The Spider-Verse. Thwip relates to the swooshing sound-effect colourfully pencilled in the comics whenever Spidey throws the hand horns to glide through the New York Skyline. It is also with that self-reverence that this film explores what it is to be Spider-Man. The release is telling of Verse’s control; to let go of a joke, a tragedy, a slice of awesome action for its ability to remix the Spider-Man mythos. As if every book since Spidey’s first appearance in Amazing Fantasy 15 has been transferred to vinyl and replayed, rewound, sped-up and merged to create a soundtrack the young Brooklynite in Miles would be stoked to listen to.

After an absurdly fun introduction from Peter Parker (Chris Pine), acknowledging all those that have gone before, along with their triumphs and fumbles, he dies at the hands of the Kingpin (Liev Schreiber) who, is using a particle collider to merge dimensions. Thus, a great responsibility is thrust upon Miles, who witnesses this tragedy but can do nothing about it. This set-up leads to the convergence of disparate Spider-People like Spider-Gwen/ Gwen Stacy (Hailee Steinfeld), Spider-Man Noir (Nicholas Cage), Peni Parker (Kimiko Glen) and Spider-Ham (John Mulaney). If you think that’s a lot of characters just wait and see the cacophony of rogues, all with a penchant to lash out against spiders. It is under this weight that Spider-Man films have failed. The juggling of too many characters. Namely, Spider-Man 3 and The Amazing Spider-Man 2. For the most part, they were tonal messes trapped beneath the burden of the genre’s ever-shifting expectations.

The state of the Comic-Book movies has never been more commercial, both financially and culturally. If, like me, you are a life-long geek who did their time reading comic books to ridicule from the football-faring crowd then, you have a little right to be pissed off. Everyone and their Aunt May now sport superhero garb, forcing it out of fashion, as the masses love to do. Verse is here for you, fellow nerds. And this is no affront to the comic-book movies earning billions but maybe the new-age of fan who’s merely adopted an entitlement to display raging angst on the internet dare an actor of ethnicity be cast as a hero written and pencilled in the 60’s.

Avengers Infinity War is the billion-earning behemoth that had no right of being as searingly entertaining and emotionally impactful as it was. It is the cumulative effect of not only Marvel Studios long-sighted game plan but a millennial movement that most overtly began in that fateful year of 2000 with X-Men. Our world hasn’t been out of the crosshairs of destruction since, via more theses on origin stories than Darwin’s notebooks. Verse is somehow the origin story that doesn’t feel like a belaboured colour by numbers but an inventive Coming-Of-Age tale (see; Miles nuanced growth), cocooned in a Boxing Drama (see; Spider-mentors oozing witty wisdoms), supported by an intricately colourful web of Comic-Book rites (see; pantheon of heroes and villains in vivacious vignettes). Don’t call it a comeback. 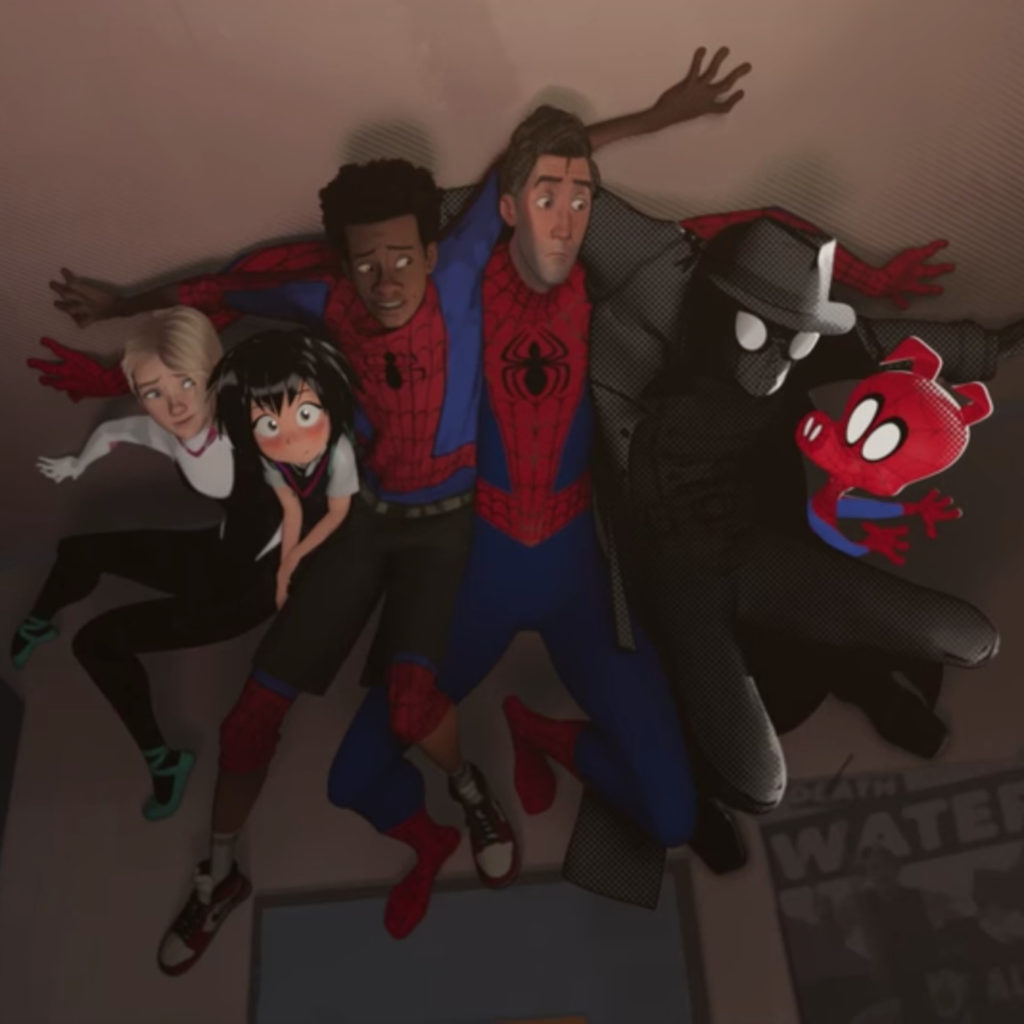 A triumvirate of directors in Bob Persichetti, Peter Ramsay and Rodney Rothman along with ingenious producing duo Phil Lord and Chris Miller bring the accrued humour, heart and hope of their individual projects that span The Lego Movie, Rise of the Guardians and 21 Jump Street. Rothman and Lord also co-wrote the screenplay. There is no shortage of talent heralding the most ambitious Spider-Man movie to the screen yet. With this multi-verse of film talent adapting groundwork laid by Stan Lee and Steve Ditko (honoured in the first post-credits scene), its no wonder that Verse is an intricately plotted and propulsively paced picture.

It’s not only a faithful telling of a roster of comic-book stories then but a full-fledged comic-book gorgeously transmogrified to film reel. As if digital comic-reader Comixology’s Guided View has been bitten by a radioactive spider, Verse glides from shot-to-shot in a frenetic fashion. The colour palette is a godly rainbow spray-painted in neon-graffiti. The directors claim, they wanted it to ‘feel like a comic-book come to life’.  That hope is not only achieved but surpassed by Dean Gordon and Patrick O’Keefe’s Art Direction. Verse feels like an avant-garde moment for the cinematic crafting of animation and, how adaptation from another medium can be played with so joyously.

For all of the visual spectacle, Daniel Pemberton has created a score to match it. A concoction of synthetic sounds, Hip-Hop beats and the more classically emotive instruments. The score is unfortunately not released until December 21st so I’ll have to keep on humming the typical ‘Does whatever a spider can,’ tune – which is in no means the only Easter egg, check the billboard, phone contacts etc.

Toxic masculinity is being rightfully smacked out of its asinine stupidity and engrained entitlement. Though I believe its ignorant accessibility has infected fandom. Toxic fandom now corrodes the heart and soul of comic books and their movies. Look on any comment section of any site showing a trailer or selling a comic. Verse is the supersonic noise to a symbiote. It doesn’t care who your favourite Spider-Man is because it neatly presents most of them. It doesn’t overtly discuss racial divides or class-bigotry for presenting a world of homogenous peoples encumbered only by their varied backgrounds and personal fears – not their political ones. It shows a superhuman strength in shifting these issues onto the audience without ever mentioning them. All of the fuss that came before Tom Holland’s casting for a collective’s desire to see a Black actor (Donald Glover fans petitioned) suit up is honoured in the most graceful way; by giving the best Spider-Man movie yet.

Verse is a multi-dimensional story about identity, belonging, community and the fact that we are always coming-of-age. That it incites the possibility for anyone to don the mask of the world’s most recognisable hero fits with its established sentimentality, and desire to define itself by discovery over conformity. Be prepared to feel like you can thwip from the cinema like a hero, though I don’t want to release the web anytime soon.