One was a classically trained Shakespearean actor, the other a much loved panto star.

Both were heroes in Wales.

So when Welsh comic and master of panto, Stan Stennett, wrote a letter to the screen idol inviting him to appear as the Baron alongside him in Cinderella in Porthcawl in 1971, it was sent with tongue in cheek and a large dollop of hope over any expectation.

It’s a warmhearted gem of a response, which references Burton’s schooldays in Rest Bay and obvious fondness for his homeland.

“One day, in 1971, out of a wickedness and his sense of humour he thought, ‘Oh, I’ll write to Richard and offer him the part of the Baron Hardup, a classic part in Cinderella, and maybe Liz would like to play a very non-ugly sister,” Roger recalled.

“It was just a cheeky little tongue-in-cheekness, nothing more or less.

“I don’t think he genuinely expected him to move over from Switzerland to Porthcawl for X weeks to do panto, but it was just a little bit of whimsy.

“Though I don’t know how he had his address.”

Sadly, Richard had to turn down Stan’s kind offer, but was nonetheless beautifully gracious in his letter. 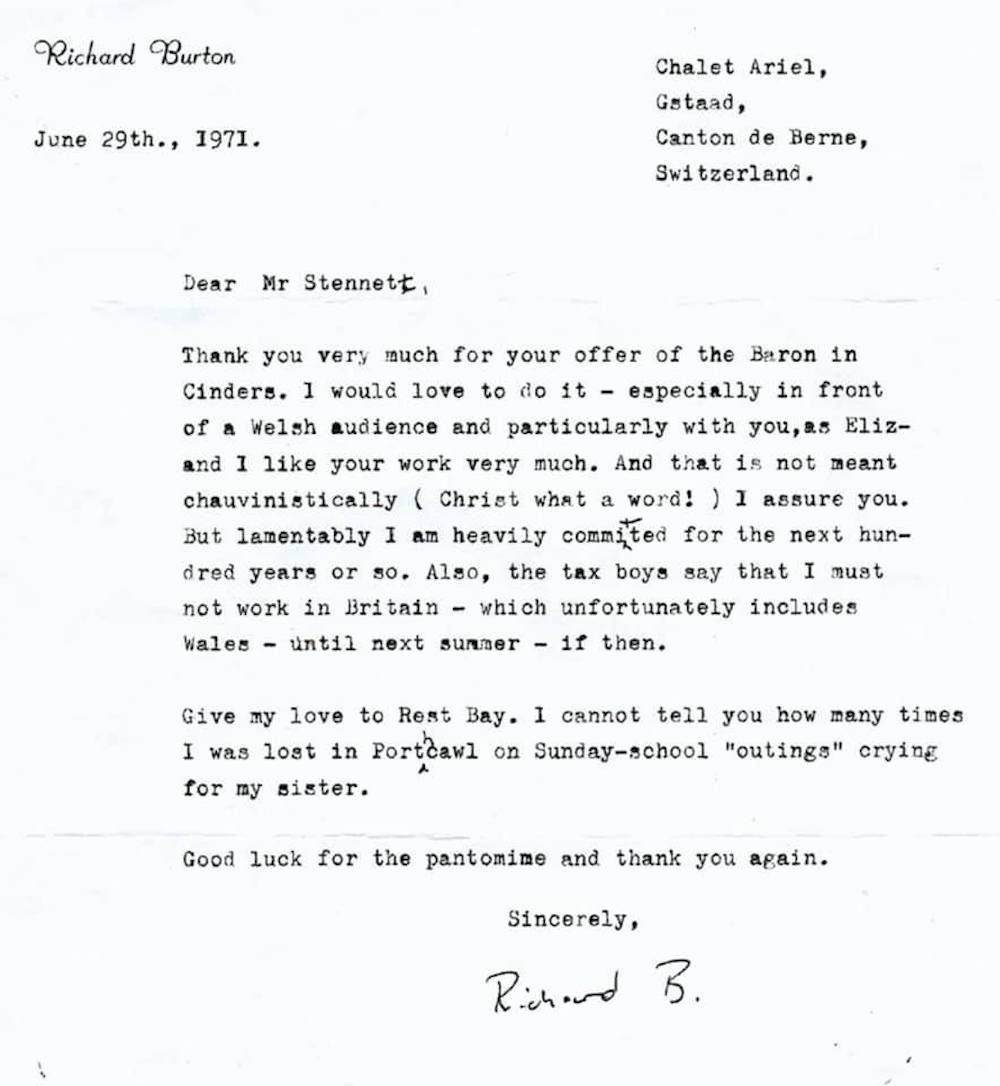 “Thank you very much for your offer of the Baron in Cinders. I would love to do it – especially in front of a Welsh audience and particularly with you, as Eliz- and I like your work very much. And that is not meant chauvinistically (Christ what a word!) I assure you. But lamentably I am heavily committed for the next hundred years or so. Also, the tax boys say that I must not work in Britain – which unfortunately includes Wales – until next summer – if then.

“Give my love to Rest Bay. I cannot tell you how many times I was lost in Porthcawl on Sunday-school “outings” crying for my sister.

“Good luck for the pantomime and thank you again.”

Roger told the Glamorgan Gazette, the response was “wonderful”, and added “I honestly don’t think you’d find many cinematic megastars now taking the time to do that. But I think it was a gesture of respect to my dad, which of course I prize.

“And, I think it was a gesture of respect for Wales, because it was a recollection of the fact that he dearly would love to work in Wales.”

What a pity that he didn’t just pay his taxes.

Or that they didn’t just pay the tax that they owed… As a proud Welsh person, I am EXTREMELY proud to pay my taxes.

When did Tom say that he’s British first?

Loved Burton, all admiration from Brazil.

Just re-watched ‘Where Eagles Dare’. Fantastic film with more than one Welsh actor starring in it – also had Donald Houston, brother of yet another Welsh Actor – Glyn Houston.