The amount and quality of Welsh-language literature has long been the jewel in the nation’s crown, most celebrated perhaps as poetry but also in its prose fiction. This decade has been a very productive and exciting one for Welsh language novels in particular.

It is said that political upheaval tends to spark a response from writers and that has certainly been the case this decade as we have seen a wealth of writing that has gotten to grips with some of the big issues of the day, from nuclear power to climate change to Brexit. Gone too has been the tendency to confine Welsh language writing to the genre of literary realism as we have seen writers dabble with sci-fi, fantasy, horror, murder mystery and a range of different genres.

Here are, in no particular order, my top ten Welsh language novels of the 2010s. They aren’t just the best written but those who have broken new ground or have had something to say that I thought summed up something about the decade as a whole.

You may no doubt have your own list – feel free to disagree with mine! 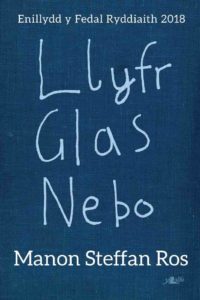 This was probably the most read Welsh language novel of the decade, and sold faster than the publishers could print new copies. Llyfr Glas Nebo (The Blue Book of Nebo, a play on the Red Book of Hergest which included the Mabinogi) has already won the 2018 Prose Medal and the 2019 Welsh Book of the Year Award so there’s little more that I can add to recommend it. It’s a novel you can read in one sitting, and probably will, telling the instantly-absorbing tale of a one-parent family themselves living in a slowly decaying north-west of Wales after Y Terfyn (‘The End’). The way the novel is written, with both mother and son pitching in chapters in a diary of sorts, means that the truth is revealed slowly in a way that keeps you on tenterhooks. What exactly did happen to cause Y Terfyn? Where did the dying daughter come from?

It reminded me the most of The Road by Cormac McCarthy, but unlike McCarthy whose vision of a post-apocalyptic America was a thoroughly miserable one Manon Steffan Ros’ post-apocalyptic Wales, despite a few nightmarish scenes that will be imprinted on my memory for years to come, is slightly more hopeful in that it suggests that the best of us may continue beyond us and that there may actually be a few opportunities in the desolation. If there is a criticism of this book, it’s that it ends rather abruptly and without a clear third act, although that might have more to do with the Prose Medal’s 40,000-word count limit that anything else. Being left desperately wanting more is, however, no bad thing. 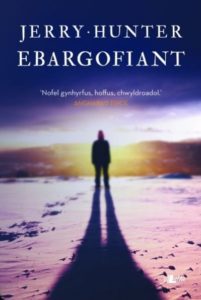 Any number of Jerry Hunter novels could be added to this list (he has published five this decade alone). But Ebargofiant (Limbo/Oblivion) is the one that most excited me despite being labelled as impenetrable by others. One of the most interesting things about the book is the words within it, which are a mixture of dialect and unusual orthography. There are numbers mixed with words, words in a row with no spaces between them, and all the words and make-up names one expects in a science fiction novel. This means that it’s rather Beckett-esque and very tough going for the first few pages. But once you’ve broken through the hard outer shell of the novel it’s an absolute joy to read, with interesting and likeable characters, a carefully crafted world and a plot that carries you along and raises several questions about current topics such as ecological collapse that are worth discussing further. 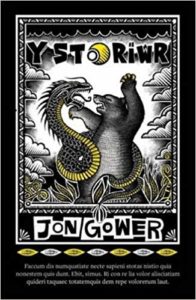 I must admit that my main feeling when reading Jon Gower’s 2011 Book of the Year winning novel Y Storïwr (The Storyteller) was jealousy that anyone could have such a complete mastery of the craft of putting words together on the page. I wish I could quote some of it here but it would no doubt be lost in translation. Gower sets words and phrases off like fireworks that illuminate the pages of the book and leave you breathless. The story itself concerns a ‘master storyteller’, Gwydion McGideon, from the west of Wales who tells his life story through the medium of his own novel. Gower brings a number of profound tales and characters to vivid life here and I was left wondering why we would need a fictional Gwydion McGideon master storyteller when we have a real Jon Gower of equal talent. 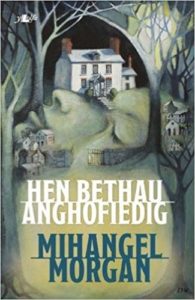 Has there ever been a horror novel written in the Welsh language before? Perhaps not, but Hen Bethau Anghofiedig (Old Forgotten Things) is an excellent start. A gay couple move into a derelict old building gifted to them bu an eccentric old aunt. It sounds rather hackneyed in summary but with the master of post-modern Welsh fiction, Mihangel Morning, at the wheel you know it’s never going to be quite that predictable. This will hopefully inspire the growth of a new Welsh-language genre. 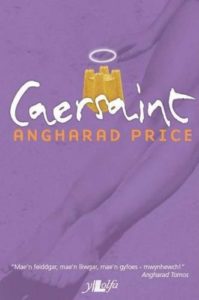 This novel landed right at the start of the new decade in February 2010 and after everyone has sung the praises of the author’s previous classic O! Tyn y Gorchudd the response was comparatively mixed. In hindsight however, I think that Caersaint is a timely and oddly prophetic novel. As with Hen Bethau Anghofiedig the catalyst is a man coming home to inherit his aunt’s house, who then ends up standing in a local election in a fictional Caernarfon. What we have here however is a novel concerned not just with politics but also how politics has become somehow distant from the lives of people and unrepresentative of their concerns. I detect here the first rumblings of dissatisfaction with devolution, and also an exploration of the central political theme of the decade which has just reached its crescendo with this month’s Brexit election. This could well be read as a novel about Brexit, many years before Brexit even existed, and that’s something of an achievement for any author. 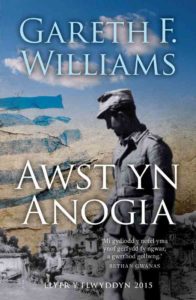 This contender for best Welsh-language book of the decade ironically, like Petrograd in the previous decade, has no real connection with Wales. Awst yn Anogia (August in Anogia) comes in over 500 pages and tells the tale of Crete during the Second World War. Like many of the best epics the novel manages to tell the story from the perspective of several different characters on both sides of the conflict and from the commanders to the gwerin caught in the middle, and portray them all as real and sympathetic however terrible their actions. This book won the Welsh Book of the Year in 2015, but unfortunately, the author Gareth F. Williams died the next year. If ever an author left us at the peak of his powers, it was him. 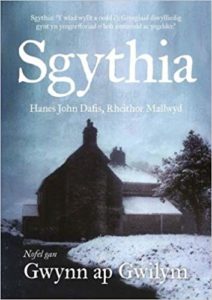 Another author who left us in 2016, and this novel was published posthumously. Had he lived to see it published it’s hard to believe that this novel would not have made the Book of the Year list as well (the rules block entries from dead authors), as one of the best historical novels of the decade and perhaps one of the best ever published in the Welsh language. The novel follows John Dafis who is sent to be rector in the wilderness of Mallwyd at the beginning of the seventeenth century. John Dafis is a very interesting character in himself, as it could be argued that thanks to his Welsh-Latin dictionary and his work on standardising the language in the Bible he played a key role in ensuring that Welsh became a modern, standardised language that is spoken to this day. Gwynn ap Gwilym was himself a rector at Mallwyd and in the wealth of characters here and historical detail in it clear that this was a masterpiece a long time in the making. 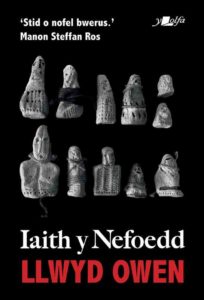 Llwyd Owen burst on to the literary scene in 2006 and along with Dewi Prysor turned the Welsh novel on its head, stretching out the boundaries of what the previously quite conservative Welsh language novel seemed to be able to discuss. Sex, drugs and violence in urban and post-industrial communities seemed to replace hiraeth, farming and drowned villages almost overnight. Since then Llwyd Owen has continued to pump out novels at a startling pace of almost one a year. This is perhaps his most interesting novel yet for two reasons. The first is that it is clearly a political novel, set in a quasi-dystopian world where the Welsh language has been criminalised following a referendum and the people of Wales are taken in by a dangerous cult and its leader ‘The Father’. The second is that it’s a multi-medium work created alongside an album by the Ods and artwork by Tom Winfield. Put it all together and Llwyd and his collaborators have once again turned what the Welsh novel is capable of on its head. 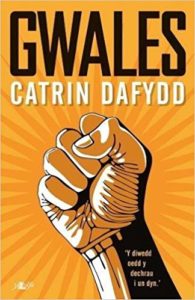 In hindsight, the 2010s may be looked back on as the decade when the Welsh national movement awoke from its post-devolution slumber and Welsh independence entered the political mainstream. If so then this novel, set in the midst of an independence campaign may prove to have been a timely contribution to the debate. While it is set in the near future its depiction of a society where ‘the welfare of people is second to the selfish forces of the select few … where people pretend to represent people but actually represent other things’ is clearly aimed squarely at our present society. Neither does the author paint a utopian picture of the fight for independence, portraying in a realistic manner the dangers of populism from the perspective of a number of different characters from different parts of Wales, ethnicities and social classes. 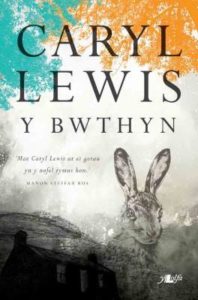 Caryl Lewis is another author who has been producing top-quality work with an amazing frequency, proving that her 2005 classic Martha, Jac a Sianco (that decade’s Llyfr Glas Nebo) was no fluke. Caryl Lewis is probably the contemporary author that has done the most to keep the traditional Welsh novel – exploring rural life in the west of Wales – alive, but does it with such subtlety and skill and vibrant, credible characterisation that the familiarity is a strength rather than a problem. These characters exist right at the edge of a way of life, hill farming, that seems destined the change forever, and this novel and others by the author encapsulated that way of life, and the culture and dialect that is part of it. With hill farming in further danger post-Brexit, perhaps in another decade’s time books like this one will be all we have left of a traditional way of life that has survived in Wales for thousands of years.

Awst yn Anogia is one of the best novels Ive read in any language, and I collect languages now.