In the coming weeks and months, SuperTed will be on a very special mission for Tŷ Hafan, flying around Wales with the aid of his secret magic word and his friend Spotty and his cosmic dust, to help support Tŷ Hafan’s local communities with their fundraising activities.

SuperTed will also be sharing stories and updates with young children and their families, nurseries and schools across Wales to help raise awareness about the vital care services at Tŷ Hafan.

Mike Young, the Emmy and BAFTA-award winning creator of SuperTed, said: “SuperTed is a brave little teddy bear who just happens to have been invested with super powers after a tough start to life. He is also Welsh through and through – and so is Tŷ Hafan children’s hospice. So I am delighted that SuperTed is now joining team Tŷ Hafan as one of the hospice’s celebrity ambassadors and, as he flies around Wales sharing information about Tŷ Hafan as he goes, I hope he will take the vital work of the hospice to whole new generations.” 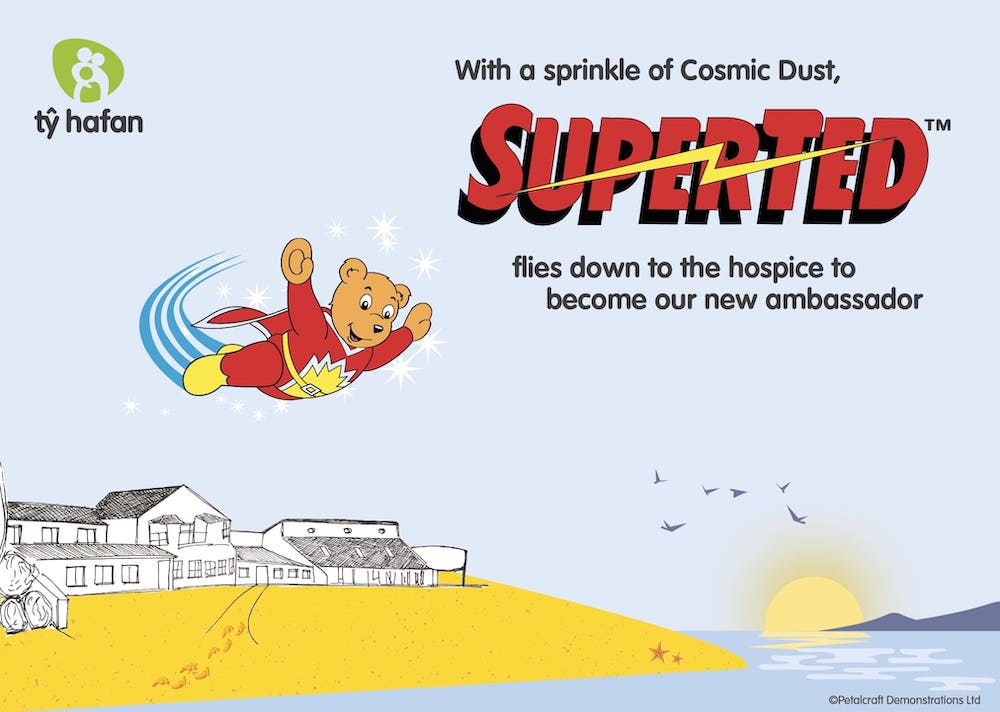 Mike, 76, and a life-long Cardiff City fan, came up with the character of SuperTed in 1978 to help his young stepson, Richard, to overcome his fear of the dark. Realising that Richard – and his friends – loved the stories he was coming up with, Mike, who was born in Cwm, Ebbw Vale, and raised in Barry, went on to write and publish more than 100 SuperTed stories as well as setting up Siriol Productions to turn SuperTed into the animated superhero teddy bear we know and love today.

On 1st November 1982, SuperTed made history as the very first programme to be broadcast on the newly created Welsh language TV channel S4C. Shortly after this SuperTed’s flash logo featured as only the second ever sponsor’s logo on a Cardiff City Football shirt.

Since then, native Welsh-speaker SuperTed has also been dubbed in English and the adventures of the heroic little teddy bear along with his friend Spotty, sister Blotch and good fairy Mother Nature, hotly pursued by the always up-to-no-good Texas Pete and his side-kicks Skeleton and Bulk, have thrilled children in more than 50 countries across the world. SuperTed has also made history as the first ever British made animation to be broadcast on the Disney Channel.

Maria Timon Samra, chief executive of Tŷ Hafan, said: “SuperTed is not only a true Welsh superhero but a Welsh cultural icon and we are delighted to have him joining Tŷ Hafan as our newest celebrity Ambassador.

“Parents who watched SuperTed first time around will relate to him immediately and his messages of positivity, courage and love no matter what. We are really looking forward to introducing him, and the values he represents, to a whole new generation of children, supporting our innovative information and fundraising pack for primary schools and nurseries.”

Francesca O’Keeffe, director of Abbey Broadcast Communications, which now owns a percentage of the rights to SuperTed, said: “I think it is absolutely amazing what Tŷ Hafan children’s hospice does. I know the positive impact a character like SuperTed can have in a child’s world.

“SuperTed is a very caring bear. After being in difficulty himself, Mother Nature gave him a special power and he is a very sweet and kind character with very good values. I think he is perfect for Tŷ Hafan.”

Mike, who now lives in Los Angeles where he heads up Splash Entertainment, added: “I’m so excited for SuperTed and Tŷ Hafan. I think this is going to be a great relationship.”

To find out more about setting up your own SuperTed fundraiser, email supportercare@tyhafan.org or call 02920 532 255.

following other stories on here, I found myself wondering what Superted had done to upset the Unionist Tories at the Torygraph

If SuperTed was wearing his pants over his trousers , preferably Union Jack budgie smugglers, was sunburnt , refused to speak Spanish, and staggered pi££ed as a fart from some Ibiza pub called Little England, Kebab in one hand, can of well-hard strength larger in the other, would be more accepted by the Tory Telegraph.