A parody poster declaring ‘No Mask, No Wales’ causes storm of protests 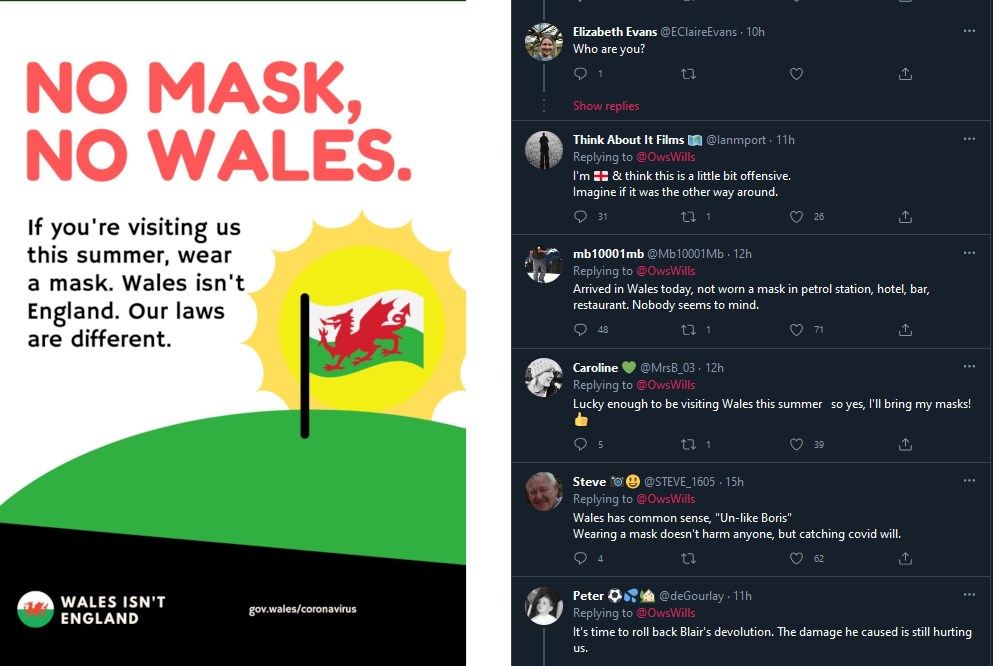 A joke poster parodying the style of a Welsh Government notice has provoked a blizzard of angry responses.

The Twitter post by Owen Williams features an image of a Welsh flag flying on a hillside with the message ‘No Mask, No Wales’.

Underneath it states: “If you’re visiting us this summer, wear a mask. Wales isn’t England. Our laws are different.”

While most recognise it as a parody, many have taken it as being an official announcement and have complained about it being ‘racist’ and ‘xenophobic’.

Owen, who describes himself as ‘professionally Welsh’ spoke to Nation Cymru about the reaction, saying: “It took me twenty minutes to make, and to be clear – it’s satire! But also, it has a serious message: Wales and England are different.”

With more than 500 comments and 29,000 likes, Owen Williams’ Twitter account has been hit with a torrent of notifications as people continue to  react.

Some of the comments include: “Its provocative and I feel its nationalistic when we rely on the English pound to drive our economy. “

Another stated: “Actually most of your laws are English and the union between England and Wales has never properly been repealed since Henry 8th. You’re still part of England”

But as well as criticism, the poster has received plenty of praise from people saying that it raises an important issue, Cian Ireland responding:

“People in the replies calling this offensive, just imagine how shop workers and other workers in industries that come into contact with tourists feel seeing people without masks. Especially when themselves or their co-workers are high risk if they catch covid?”

Face coverings continue to be compulsory for public transport and shops within Wales while the UK government has made it advisory in England.

I couldn’t see the parody either. It seems factual and reasonable. Anyone who takes offence just hasn’t grasped that Wales is not England.

Come to Wales for your own protection…

It’s clear from some reacations here that people (many of them Welsh) are clueless about the constitutional status of Wales. The United Nations say that we are a “constituant country of the UK”. i.e. the same status as England and Scotland. Any other interpretation, historic, modern, or just plain unionist wishful thinking is incorrect notwithstanding the assumptions of the terminally submissive. Of course the entitled arragance demonstrated by the English ruling elite confuses the issue for all but political anaraks, a confusion magnified by the servile attitude of our “leaders” here in Wales who would sell their granny for an… Read more »

Here goes…in the New Aberffraw ‘Titles’ must be a thing of the past. If a person excels give them a chair…

And the United nations says any country can become independent without the permission of the dominant coyntry in a forced union.That means no permission is needed to leave.

It’s funny and it’s true and it’s reasonable.
But it is very telling that the GBeebies shriek “xenophobia” at something stating factually that we are not England and that we have our own restrictions.
Zero self-awareness

I can’t believe how much fuss “if you’re visiting somewhere please respect the law in that area” has caused and I can’t believe “Wales isn’t England” has been accused of all-sorts. Think the hot weather is getting to people.

Oh I can believe it. The shallow end of England’s gene pool are both dense and arrogant.
The decent English must be so embarrassed by them

Lead in petrol over generations!

Whoever invented pushchairs needs locking up!

Reminds me of the idiot tourists who go to places like Dubai and then moan about the fact that they get arrested for having sex in a public area such as a beach (which I’m pretty sure is illegal in most jurisdictions including every country in the UK), so I’m not holding out any hope that English tourists will respect our regulations. Which is ironic given that they are the first to expect ‘forriners’ to respect the laws and customs in the UK.

Don’t see how anyone can hate the English more than they loathe themselves. Just look at the way they expose their grannies to covid and their kids to hunger.

I’d hope this isn’t about hating the English. Most of them (well at least 48.2% of them) are great.
but I take your point about their Covid chaos

Yes, typical decent Englishmen are currently sharp-elbowed out of the way.

“most of your laws are English and the union between England and Wales has never properly been repealed since Henry 8th. You’re still part of England” said one of the miscreants complaining – what greater spur to Welsh independence do we need than such displays of arrogance and contempt for us in Wales than this?

That’s the Welsh king Henry VIII idiot son of Welsh king Henry VII. So the “union” was Welsh led and England was absorbed into Wales.
Another reason to loathe the Tudors. But the Yoonion was created by Welsh kings. It is fitting then that the Cymry should end the poxy thing

Nice try with the “xenophobic” ploy, BritNats. Just not relevant. Also,”parody” is a strange word to decribe a perfectly sensible warning to tourists to abide by the Covid regulations of this country.

Permanent, large, bilingual and memorable signs needed at all (but the smallest) border crossings to remind travellers that when they travel between Wales and England (and visa versa) they are crossing from one political jurisdiction to another and that regulations may vary. It is a small step but an important one for Mr Drakeford to take to reinforce the visibility of devolution and individuality of the two nations. 🏴󠁧󠁢󠁷󠁬󠁳󠁿🤝🏴󠁧󠁢󠁥󠁮󠁧󠁿

Well the point Wales ‘is not’ England needs to be reinforced – many who will cross the border will be ignorant of this fact, blinded by the ‘UK’ press.

did anyone else know that the GB sticker used on vehicles going abroad to forrin parts is on the way out it’s to be replaced with a UK sticker, I’ll stick with CYM

My company car 4 years ago came with a butcher’s apron on the index. Luckily they made a mistake with the number and sent me new plates without that abomination on it