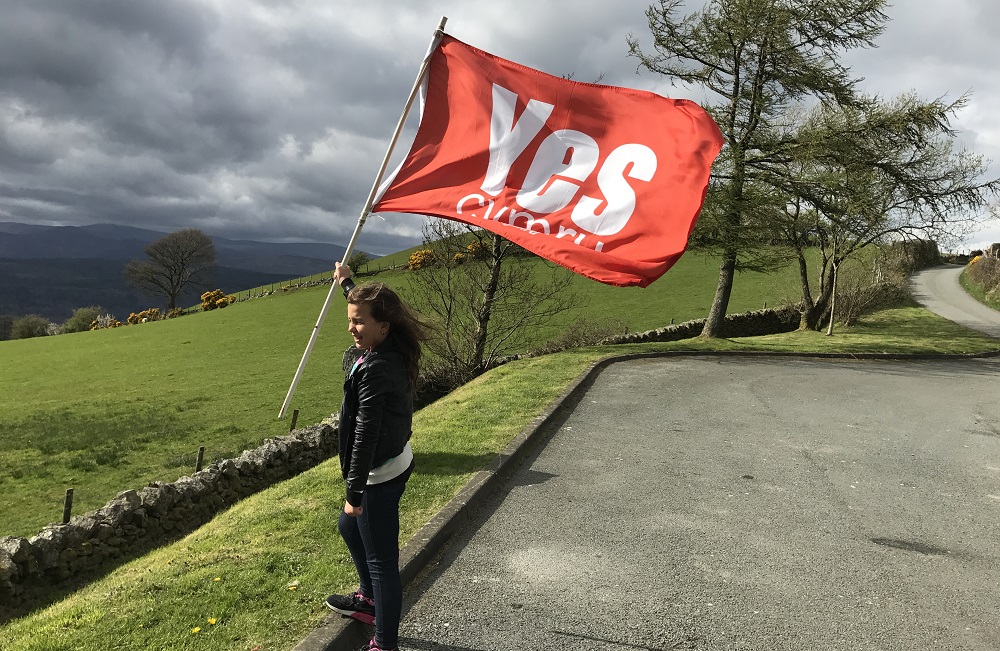 Cardiff will host Wales’ first festival exploring how Wales could be an independent nation, it was announced today.

The festival will take place at three venues on Womanby Street on Saturday, September 16th. Tickets are on sale now.

Indyfest will explore the theme of independence through poetry, song, drama, workshops and talks, as well as comedy from ‘Stand Up for Wales’, headlined by Steffan Evans, with MC Sarah Breese.

There will also be a number of book launches including Catrin Dafydd’s Gwales, and Yes Cymru’s recently released sell-out publication Independence in Your Pocket.

Sandy Clubb, Chair of Yes Caerdydd, said that the movement had been planning for a festival of Independence for some time.

“We’re very excited,” she said. “Not only do we have a fantastic line-up of artists, bands and speakers, but the whole festival has a really creative playful feel to it which is making it great fun to be part of.

“Our biggest challenge has been fitting in everybody who wants to perform!”

Yes Caernarfon have also announced that they will be organising a festival under the #indyfest banner on the same day. 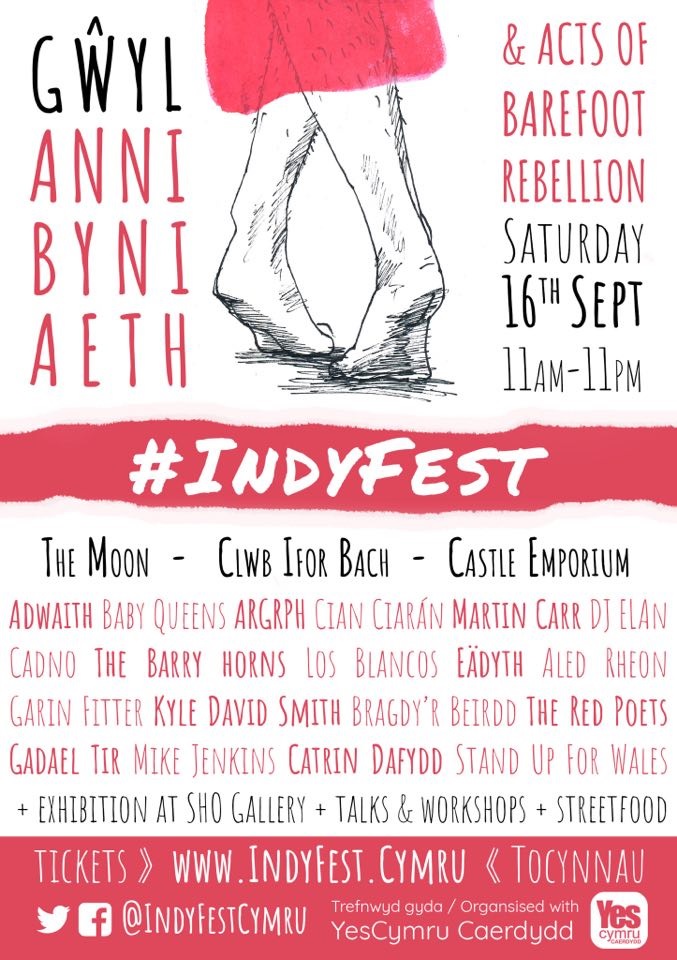 The festival will be a collaboration between Yes Caerdydd and Barefoot Rascals Day, who had already planned a festival on 16 September to celebrate Wales’ “rebellious spirit”.

At the heart of the festival is ‘Gadael Tir’, a show that tells the story of land rights and protest in Wales.

Huw Angle, from Barefoot Rascal Day and one of the festival’s lead organisers, said: “I saw Gadael Tir last year, during their first tour of the show, and was inspired to shape the festival around it.

“Through music and other performances, it uncovers the fascinating history of the common folk who strove to build the nation from the ground up.

“It’s a celebration of their independent and rebellious spirit and Gadael Tir captures that beautifully.”

Is it possible to get tickets on the day?

Tickets are sold online- It’s £10 for an all day/night ticket, £6 for a day ticket and £8 for an evening ticket. Once they’re gone they’re gone! If there are any unsold tickets they’ll be sold on the day but there are no guarantees that there will be any left. There is a link to the #IndyFest webpage below. Hope this helps! Diolch

I was asking because we need to be flexible with our only, short, holiday this year as I’m recovering from major surgery. However, I think we’ll get the tickets now anyway, thanks for helping us decide.

Looking forward to being there and being embraced by all things Cymreig!

Will there be a twitter feed so that armchair nationalists can comfortably follow it from home? Nation.cymru could provide one

A good day to have it. Owain Glyndwr Day. ❤

A terrible day to have it. My granddaughters birthday. I’d have loved to come.

Bring your granddaughter John! There will be children’s activities and no need to pay for children to attend the festival. Little ones are able to attend events during IndyFest day just not in the evening at Clwb Ifor Bach.

She may love the idea Elin but the rest of the reprobates going to the party would have a hissy fit. You never know, I may be able to work something out.

Have a wonderful day Wee Wales ! Love from Bonny Scotland!

This is really exciting!

Yes Cymru Abertawe will also be staging an event on 16th September.

Any details yet Leigh ?

Yes John there’ll be a rally on the evening of the 16th (from 7pm onwards) at the schooner inn, prospect place (its near the marina). There’ll be speakers, music and comedy (pleased to report that among the confirmed speakers is plaid’s Adam Price).

This does sound interesting and I would like to attend, but it does seem like it will be full of Plaid Cymru supporters and socialists with blue hair.

People like me who do not believe in the EU and believe that every country should be independent and sovereign feel a bit homeless. I am not a unionist, so I can’t vote Conservative. I’m not a socialist, so I can’t vote Plaid Cymru. So where do I as a right-leaning Welshman turn?

This is an Independence event. British politics doesn’t come into it. It is not a left, right or centre political event, it is an Independence event. The whole idea of Independence is to break all traditional ties with the British including political ones. Turn to our Celtic heritage, return and be part of the Celtic Nations.
The sooner everyone wakes up to the fact we are not descended from Germany or the low countries the sooner Cymru can move forward as a modern progressive movement.

By the way, this is the first ever #Indyfest so how do you know it isn’t for you, or have you made your mind up already?

As Dafydd said this is an
Independence event not a political event. Not sure if you’ve read Yes Cymru’s ‘Independence in your pocket’
handbook? It’s a great read.
http://yes.cymru/wp-content/uploads/2015/10/Independence-in-Your-Pocket1.pdf
Page 44 talks about YesCymru’s viewpoint on Brexit, the EU, the U.K. and Wales.