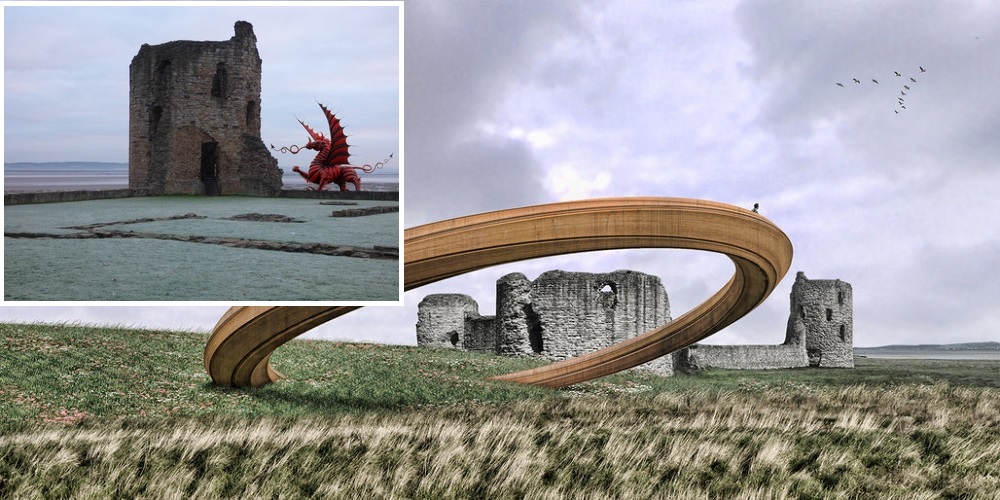 A petition has been launched calling for a Welsh dragon to replace the controversial iron ring sculpture proposed for Flint Castle.

Jennifer Humle, who created the petition, said that it would “create a new attraction at Flint Castle for children to explore and visitors to enjoy”.

It would be “our version of the Angel of the North” and “hopefully visible from the Wirral too”.

More than 11,000 people signed the original petition asking for the Iron Ring design to be scrapped.

The Cabinet Secretary for Economy and Infrastructure, Ken Skates, announced in July that the plans had been put on hold.

He said: “We have listened and recognise the strength of feeling around the proposed art installation at Flint Castle.

“Working closely with local partners we will continue to work on proposals for developments at Flint, including reviewing new visitors’ facilities.”

Plaid Cymru councillor Mabon ap Gwynfor said that he welcomed the fact that there was a discussion within the community about what should replace the Iron Ring.

“This is how it should have been from the beginning, with the people of Flint at the heart of the project,” he told the Leader.

“Those of us who opposed the iron ring didn’t oppose developing a nationally significant piece of art in Flint. To the contrary.”

There’s a difference between quality public art and marketing gimmicks. Visit Wales and CADW – and all of us – should remember that.

My first thought also was not a dragon. My second thought was that a monument to a real Welsh hero of the past would be more fitting. Who that should be is the question.

Spot on John, any memorial to a genocidal psychopath like Longshanks should be binned. Indeed demolish the castles and replace them with plaques saying something like – ” here stood a fortress built to keep the Welsh subjugated, lasted a long time but blown away by the winds of change !”

Demolishing the Edwardian castles would be an act of vandalism of the same magnitude as that of the Taliban in the destruction of ancient monuments commemorating Bhuddism. Although they represent Wales’ subjugation, they are still an important part of our history. It is how we choose to interpret them that is the crucial issue, and I don’t think any punches should be pulled in this. Many years ago a friend of mine worked as a guide for the summer in one of Cadw’s Edwardian castles, and his job involved telling visitors about the history of the castles and the effect… Read more »

Not a sound comparison. The Taliban were setting out to eliminate history – start with a blank page, Day 1 etc. I suggest we leave plenty of historic notes, maybe a brick or two, but show our capacity for shrugging off the baggage. These places give me the urge to get violent and at my age that is not good !

We may not much like what the Castles dotted all around Wales historically represent but i suspect we rather like the billions they help generate for the welsh economy annually in tourism http://gov.wales/topics/businessandeconomy/our-priority-sectors/tourism/?lang=en

sibrydionmawr adopts a sensible approach to this matter i think.

The appetite for tourism shows a willingness to accept poor wages and conditions for those employed in mostly seasonal work. I suspect you don’t work in that sector yourself so careful what you inflict on others.

No sure how you could think that Dafis – as a matter of fact i would like to see all workers in Wales paid a living wage, i hope you do to http://www.cynnalcymru.com/living-wage/

Poor wages and working conditions are a big issue, but that can only be changed by the workers themselves, as no-one else is going to do it for them. There is nothing to stop them joining a union, or even better, establishing their own union, especially for marginalised workers in the tourist and related industry in Wales. It could even be part of a general union for Welsh speaking workers, who are at present marginalised by the mainstream unions as well as by employers. I know that workers in tourism are marginalised and in a weak position, and much of… Read more »

Sibrydionmawr – That last paragraph of yours is right on my line of thinking about tourism, in particular. There is exploitation of “one sided” employment contracts in other sectors but Tourism and “hospitality” are cases that stand out for corrective actions. Tourism as currently configured is not worth the costs it inflicts on services, communities and people tied to it. As you rightly point out too much of the revenue flows straight out of Wales without hardly touching anything on its way. By its actions our Labour Government condones that flow. They have the power to change the pattern but… Read more »

Not another dragon please. How predictable and cheesy can we get? Lets have some proper public art. Keep the ring.

I tend to agree with C S Lewis…

It should be a statue to commemorate Taliesin The Bard. It was through bardic traditions that the language survived.