Disgraced Delyn MP Rob Roberts looks set to return to the Commons early next month following the end of his six-week suspension for sexual misconduct.

According to BBC Wales, UK ministers have decided not to allow MPs to vote on expelling Roberts, as they do not want to “undermine” the decision of the Independent Expert Panel, which recommended he be suspended for harassing a male aide.

Mr Roberts also had the Conservative whip removed and senior Tories, including the Leader of the House of Commons Jacob Rees-Mogg, have called for his resignation.

Boris Johnson’s press secretary told the BBC yesterday that the Prime Minister thought Mr Roberts’s behaviour was “unacceptable” but would not say whether or not he agreed with calls for him to quit.

Roberts could also face a further investigation into allegations of sexual misconduct after a former parliamentary intern said she would make an independent complaint about Mr Roberts if he does not resign.

She says she was propositioned by Mr Roberts in a series of text messages last year.

“It honestly disgusts a lot of us that he has the audacity to remain in his position,” she said.

“It also makes us all feel unsafe that in six weeks he can come back and still be on the parliamentary estate.

“I don’t work in Parliament anymore, but I still work in politics, and it is difficult for me to do my job sometimes, because he still pops up on my radar.”

A motion to expel the Roberts could still be brought forward by opposition parties in the Commons before his return.

A further 209 cases of the Delta Covid variant have been detected in Wales since Monday, according to the latest figures released by Public Health Wales.

Overall, 788 people in Wales have tested positive for the variant, which was first identified in India in April and is currently the dominant mutation in Wales, accounting for more than 80% of all new Covid cases.

PHW is also reporting another big jump in the number of new infections in the last 24 hours as the falls in recent months are being rapidly reversed.

Since yesterday’s update, 438 people have tested positive for Covid, taking the weekly total above 1,100.

Blaenau Gwent (9) and Merthyr (4) are currently the only two local authorities in Wales with case rates in single figures for the past week.

Football and rugby fans urged to support their teams from home

Welsh sports fans are being warned against travelling to watch the clash against Denmark in Amsterdam on Saturday in Euro 2020 and the British and Irish Lions rugby tour to South Africa next month.

Dutch police have already advised supporters from Wales they will not be allowed into Holland for the final-16 match against the Danes.

“For all countries outside the EU Schengen travel area a travel ban is in place, unless a country is on the EU safe list. The UK is not on this list and therefore a ban on travel to the Netherlands is in place for all non-essential travel. Visiting to watch a football match is classed as non-essential travel,” Health Minister Eluned Morgan said.

“The Netherlands has also put in place requirements for mandatory quarantine and testing for arrivals.

“The UK Government advises against all but essential travel to the Netherlands.

“We wish Wales the best of luck and would urge fans to enjoy the football at home.”

“I would also urge anyone considering following the British and Irish Lions rugby tour to South Africa next month to heed this message and not to travel to that country.  Rugby fans, like football fans, need to play their part in helping to keep Wales safe,” she added.

“South Africa is listed as a ‘red’ country, given the risks posed by the variants of concern present, which could have a damaging effect to our vaccine programme if brought to the UK.  The Beta variant, dominant in South Africa, is better at avoiding the protective effect of the Covid Vaccines than other variants.”

Under current Covid travel restrictions anyone arriving to the UK having been in a red country during the previous 10 days, must enter a managed quarantine facility (quarantine hotel) in England or Scotland, before travelling on to Wales.

The minimum cost of the accommodation is £1,750 for 10 days and returning travellers are required and take PCR tests on day 2 & day 8 before they are permitted to return home.

A fine of up to £10,000 can imposed for failure to comply with the regulations. 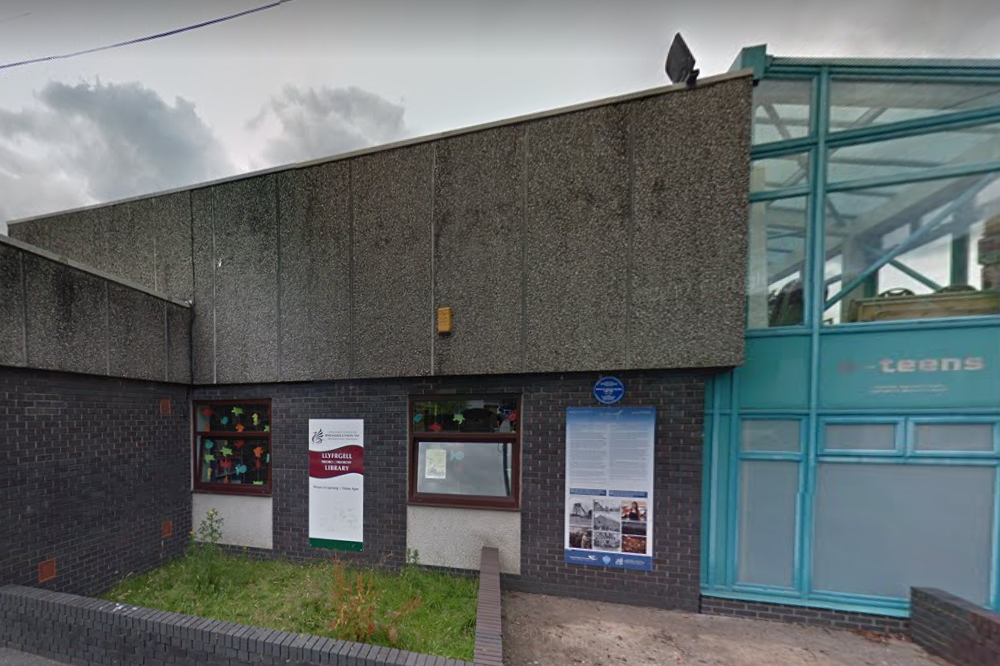 Treorchy Library. Photo via GoogleNew Government support for improvements for museums and libraries

Eight museums and libraries are to receive from £1.1 million of funding through the Welsh Government’s Transformation Capital Grants.

The scheme aims to support local museums, archives and libraries to improve facilities with a particular focus on widening access and developing sustainable services.

Five libraries will be modernised with the funding going towards new community facilities and supporting the establishment of wider ‘hubs’ where people can access library services alongside a range of other amenities.

Treorchy Library will be redeveloped and will work in partnership with the Park and Dare Theatre to create a new cultural hub for Treorchy to create a more modern and flexible space which can hold a wide range of events and activities.

In Rhayader, the Rhayader Museum and Gallery will see an Installation of a new mezzanine floor in a volunteer run museum to improve the exhibition space and create new storage areas for the collections.

As part of the multi-million Pendine Tourism Attractor project, the Museum of Land Speed, is being completely rebuilt. The funding will support the fit out of a multi-function education room, and a new exhibition space which will allow temporary displays and loans from national collections when the new development opens.

“These projects will widen access for our communities, promoting cultural engagement, providing learning opportunities and supporting community cohesion and prosperity, which is needed now more than ever,” Deputy Minister for Arts and Sport, Dawn Bowden, said.

A £20 million bid will be submitted to the UK Government to improve the area surrounding Newport’s railway station.

Newport council’s cabinet has given the go-ahead to submit a bid for funding to regenerate the area around the entrance to Newport’s railway station.

Under the plans, Queensway, Cambrian, Road, Bridge Street and parts of Upper Dock Street would all benefit from improvements to make the area more “green”.

The UK Government has set aside £4.8 billion for its Levelling Up Fund (LUF), up to 2024/25, which will be available for all areas of the UK to “invest in infrastructure that improves everyday life”.

Newport City Council has identified what it is calling the ‘Northern Gateway’ area, which currently “feels divorced from the city’s leisure and retail offer”.

A report on the proposal says: “The gateway area into the city centre from the train station should be fit for purpose and reflective of the quality of place we are trying to achieve for our visitors and residents.”

The council can submit a bid of up to £20 million for the project, but if it was given Government backing, 10 per cent would have to be fronted up by alternative means – either from council funds or a third party.

The UK Government is set to prioritise the areas which have the most “significant” need based on economic recovery and growth, improved transport connectivity and the need for regeneration.

The city council says Newport has been placed in the highest priority category.

Although the costs of the proposals are still being finalised, the council expects the bid will request the full £20 million.

As part of the bid the council intends to use “existing and pipeline schemes in the Northern Gateway area as the match funding as these are directly linked to the public realm improvements for the area”.

The council also has £4 million of unallocated funds, which allows some headroom and could be used if needed.

If the council is unsuccessful on the first attempt, they could resubmit bids in future rounds.

“This included the development of new hotels and office space aimed at bringing economic resilience, creating opportunities and raising the profile of the city to those wishing to visit or invest.”

The deadline for submissions for the first round of funding was June 18, and the council could find out as early as autumn this year on whether they have been successful with the bid.

If the funding is granted, then it must be spent by the end of March 2025.

Newport can submit proposals for other schemes in other bidding rounds, but if the council is successful with the Northern Gateway bid then no other bids for sites could be submitted in the same constituency area – Newport West.