This afternoon’s plenary session began with an emergency question tabled by Adam Price AM (Plaid, Carms. E & Dinefwr) asking for a Welsh Government statement on this morning’s dramatic Supreme Court judgement that Boris Johnson’s prorogation of the UK Parliament was unlawful as well as null and void.

“Lying to the people, lying to Parliament, lying to the Queen is a trinity of grave constitutional crimes. What’s totally clear is that the UK Prime Minister had closed the doors of Parliament with the relish of the dictator that he is, and I’m very pleased that we played in a central part in the case that held the Prime Minister to account. Today we saw the true meaning of taking back control.”
– Adam Price AM

Adam Price promised to shout louder when attempts are made to undermine democracy or silence advocates; he asked whether the First Minister agreed that Boris Johnson should resign immediately given his blind spot to the rule of law.

The First Minister said the Supreme Court judgement laid bare an attempt to use prorogation powers to attack “the founding principles of our constitution”.

“It is impossible for us to conclude, the Supreme Court said, that there was any reason, let alone a good reason, to prorogue Parliament. It follows the decision was unlawful. When a Prime Minister is found to have acted unlawfully and undemocratically, I don’t see how that person thinks that he can legitimately continue in office.”
– First Minister, Mark Drakeford (Lab, Cardiff West)

Leader of the Opposition, Paul Davies AM (Con, Preseli Pembs.), whilst accepting the judgement and the rule of law, was under no illusions as to who was to blame for this mess:

“….this Brexit impasse, and the position we now find ourselves in, has been created as a result of your Labour MPs having frustrated the Brexit process, against the will of the Welsh and British people….if your colleagues had voted for the previous UK Government’s Withdrawal Bill, then we wouldn’t be having this conversation. We would have left the EU by now….But we can now see that….you don’t respect the result of the referendum, because you’ve now made it clear that you want to stay in the EU, full stop.”
– Leader of the Opposition, Paul Davies AM

He challenged the First Minister to support a UK general election.

The First Minister thought it was strange for the Conservatives to say they support the rule of law when the Prime Minister has publicly said he disagrees with the judgement and will seek to leave the EU on October 31st despite the UK Government passing a law to prevent a “No Deal Brexit”.

Mark Reckless AM (BXP, South Wales East) believed the UK’s constitutional precedent was that royal prerogative powers are only limited when the UK Parliament has explicitly limited them in law – but no such law on prorogation has been passed in hundreds of years.

The First Minister replied the court was itself passing judgement on a Prime Minister who departed from constitutional norms.

Putting the Queen in an awkward position

Carwyn Jones AM (Lab, Bridgend) described it as the deepest political crisis in his 20 years of politics, but it’s not unusual for the courts to strike down ministerial decisions as unlawful – though the use of the word “improper” in the judgement is a stinging rebuke from a judge. He also said this put the Queen on the spot as she can’t be sure ministers are giving her good advice, yet she has little to no discretion in what to do in such a situation.

David Melding AM (Con, South Wales Central) said prorogation needed a clearer set of rules, so he welcomed the judgement. He added, to applause, that it was extraordinary to think that parliament shouldn’t sit during a national crisis. This was about more than Brexit.

Alun Davies AM (Lab, Blaenau Gwent) agreed, adding that prerogative powers had to be subject to democratic accountability not just the judgement of the courts – effectively calling for a new UK Constitution.

Leader of the Opposition, Paul Davies AM (Con, Preseli Pembs.), focused on some of the policy announcements at Labour’s conference, in particular cutting working weeks to 32 hours on average within a decade. Did the Welsh Government support this?

While sharing the CBI’s concerns, Paul Davies was more concerned about the potential impact on the NHS:

“We’ve long debated the recruitment crisis caused by your government….and we know that the health service is already struggling to cope with demand for doctors, nurses and other health professionals. First Minister, can you tell us how many extra doctors, nurses and other vital NHS staff will be needed to meet the extra pressures that this policy will create, bearing in mind you’ve failed to recruit enough to meet the current needs?”
– Leader of the Opposition, Paul Davies

The First Minister thought it was “an excellent policy”, which could be popular with workers, drive up productivity and rebalance the economy in favour of working people.

He added that recruitment problems were caused mainly by policies pursued by the UK Government; restrictions on immigration were a far bigger threat to NHS recruitment than shorter working weeks.

Adam Price AM (Plaid, Carms. E. & Dinefwr) picked up on a job advert for a lead position for a child poverty review. What was this position, paying £60,000-a-year, about? Surely after 20 years in government, Labour ought to have an idea of why and how children live in poverty.

The Welsh Government has also in previous years dropped a target to eliminate child poverty as well as dropping a ministerial post dedicated to tackling poverty. Scotland was racing ahead with the introduction of binding anti-poverty targets and topping-up universal credit payments. “Isn’t the biggest poverty of all poverty of ambition?”

The First Minister said the idea that Labour wasn’t interesting in tackling child poverty was nonsense and he was disappointed that Plaid Cymru didn’t think it was worth having a deeper understanding.

“….if we have a better understanding, and particularly if we have a better understanding through the eyes of children themselves, then we will be able to do what is something that I know is shared between our parties; we want to make the greatest difference that we can in the lives of children in Wales, and we particularly want to make that difference in the lives of those children where money is the barrier to those children having the sorts of lives and experiences we want them to have.”
– First Minister, Mark Drakeford (Lab, Cardiff West)

Mark Reckless AM (BXP, South Wales East) picked up on another Labour conference proposal, which is to set a net-zero carbon emissions target by 2030 – just 11 years away (the Welsh Government has a 2050 target). He claimed this would be “an absolute disaster and would lead to a collapse in the economy”.

The First Minister wanted the Welsh Government to have “the most ambitious, achievable climate change targets that we can put in place.” Any targets, should the UK Government and its priorities change, will be based on advice from the climate change commission. 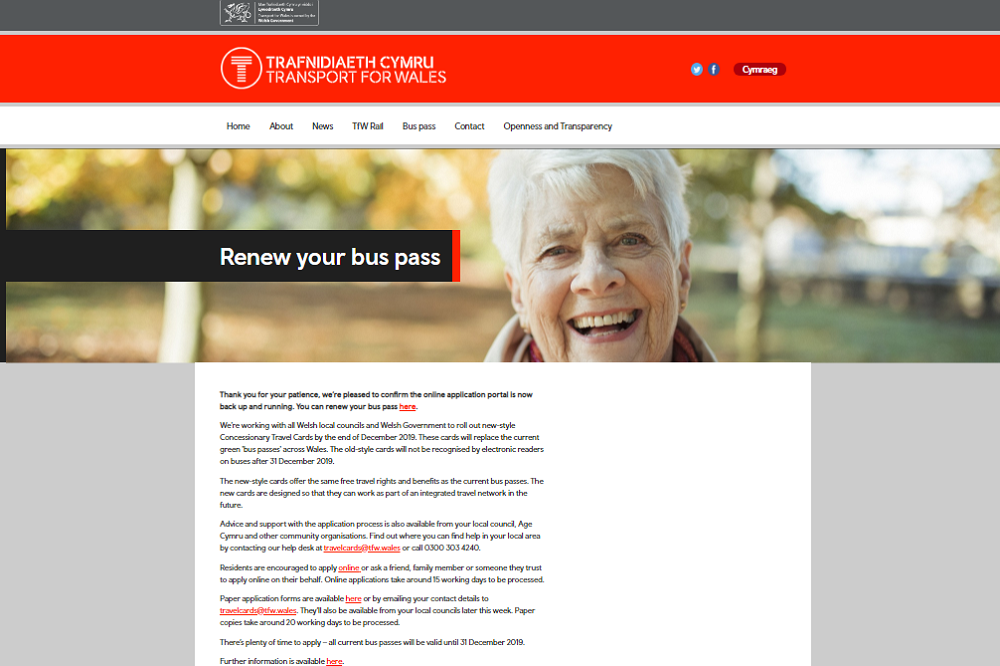 Transport for Wales (TfW) has been criticised for their management of bus pass renewals.

Leanne Wood AM (Plaid, Rhondda) said: “I’m disappointed that the Labour Government initially insisted on an online-only application process. The Rhondda has been shown to have high levels of ‘digital exclusion’ and this would be higher among pensioners than any other age group.”

Old-style green-coloured bus passes need to be replaced with new ones by 31st December 2019 and during the first days of the application website being active, it collapsed under the weight of traffic. After undergoing further testing, the website (link here) was back up this week (w/c 23rd September 2019).

TfW were initially not accepting paper applications, but as a result of the website issues, they announced last week that paper renewal forms will be made available from local councils, libraries or as a download from the website.

Age Cymru said: “At this stage, we would urge older people not to panic about renewing their passes. The deadline is not until 31 December so there is plenty of time to make the application.”