Iceland shows Wales what happens when you choose independence 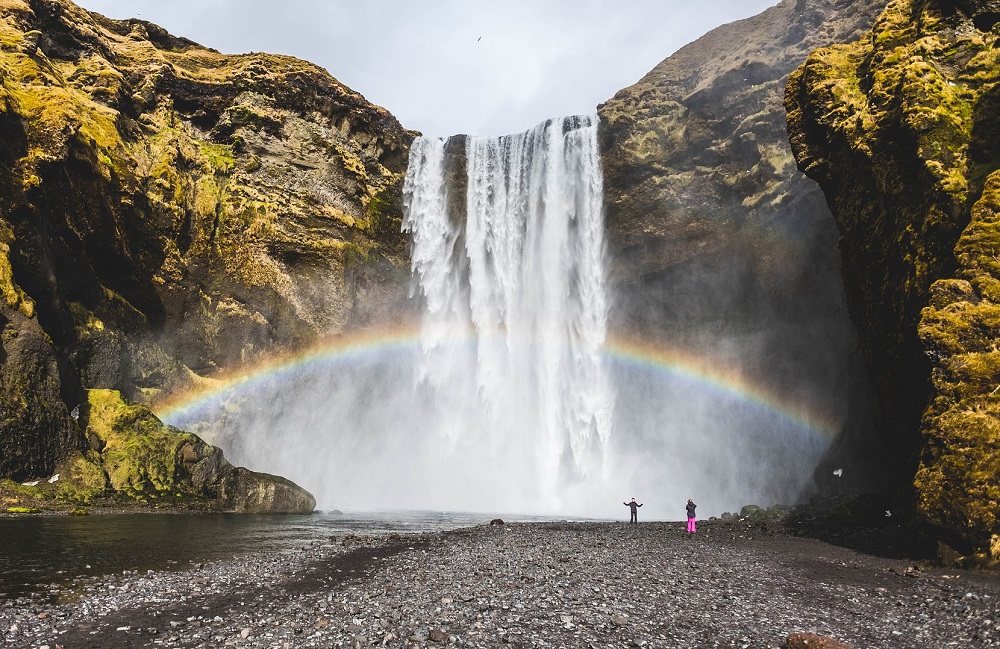 I went to Iceland over the holidays and I couldn’t help but feel inspired. There is a confidence to the whole country that derives from their sovereignty.

One day, the tour guide stated that under Danish rule Iceland had been so poor that some people dwelled in caves in the nearby mountains right up until 1935.

But independence in 1944 changed everything, she said with pride. With a government implementing policies in the Icelandic national interest for the first time, the country was transformed and is now one of the richest sovereign nations in the world.

Wow! In the space of less than a single lifetime, a country with its own language and culture had completely changed the life prospects of future generations.

Like me, the guide wouldn’t have described herself as a nationalist. She was a normal Icelandic woman but could see that a country running its own affairs was just common sense.

Iceland generates one hundred percent of its energy through sustainable means. Heating is so cheap, that in temperatures of minus 5, the preference is to open the windows, instead of turning off the heating.

The air is clean. The people are proud of their Viking and Celtic heritage. The Icelandic people are grounded with the knowledge of their own history.

They don’t learn about Danish kings and queens, they learn about the history of their own island. Icelandic history is shown off like the jewel that it is.

I was riveted with the details and felt disbelief that we are unable to do this in Wales.

A lot of people don’t go to Iceland because of the price. And I have to confess that things were quite expensive. Following the happy hours is good advice for any tourist.

But every time I paid, I would look around at the nonchalance of the locals as they settled their bills.

A quick googling of OECD figures showed that on average, people in Iceland earn three times the amount we do in Wales.

Factor in the weak pound since Brexit and I could easily appreciate the relaxed atmosphere to most things. Crime is negligible, with wealth is spread surprisingly evenly amongst the population.

When I think about those Icelandic people who were living in caves only a generation ago, Plato’s Allegory of the Cave comes to mind in his best-known work, “Republic.”

In the book, Plato describes a cave where people are chained with a fire burning behind them. They don’t see the fire, because they cannot turn their heads.

Unchained people walk between the fire and the chained people, which casts shadows on the wall in front of them. The people in chains believe the shadows to be reality; they are ignorant of the real world.

A freed prisoner who escapes the cave, Plato argues, would soon see that there is a better world beyond the cave. And the true philosopher, he argues, is the person who returns to the cave to tell everyone to free themselves.

In the story, Socrates understands this won’t be easy, arguing that some people in the cave would stop at nothing to prevent them being taken from the only way of living they have ever known.

So when people insist that Wales can’t be a sovereign nation, we all need to be Plato’s philosophers. There are places beyond the cave.

We should tell them about countries like Iceland and point them in the direction of Yes Cymru because it’s the duty of us all to build on the popular enthusiasm ignited by this young and vibrant movement.

Some people will fight to keep things the way they are, but the movement of people demanding sovereignty is able to see that there is a better way of living for our country.

2018 can be the year we not only dare to dream but where we put in place a pragmatic plan to get on and achieve a sovereign Wales.

I want our children and their children to have the opportunity to live in a Wales we know we can create.

No more living in caves. Let’s get it done. #LGID

Spot on as usual Neil. Why are you wasting your time with Plaid Cymru? You deserve a better party behind you.

Well yes, but my O Level geography tells me that Iceland is essentially an island many many air and sea miles from its past colonial rulers the Danes. Wales, as well as being next door, as it were, to England, is intimately integrated by population, economic and social ties. Using Iceland as an exemplar, even with Socratic references! is somewhat wishful thinking. I get the impression that the author might be happpier living in Iceland than Wales! That said, of course more ‘independence’ is needed but it will have to be taken and fought for as it will never be… Read more »

Iceland had a degree of self government from 1874, it gained full sovereignty over home affairs in 1918 and full independence in 1944. The current state of affairs took considerably longer than one lifetime. More importantly, Iceland is a remote island with an economy that was never integrated with Denmark. Its situation is not remotely comparable with Wales. The key to building an independence movement in Wales is not looking at countries with little in common with us but to show people what an independent Wales would look like in practice. What would be its relationship with England and the… Read more »

I’ve been a member of the Scottish National Party for over a decade. During that time I’ve lived in Canada, South Korea, my native Scotland, and now Wales. I rejoice in what the SNP government has done for Scotland, especially poor people. The Westminster government and the London based, foreign owned UK Media, and especially the BBC, distort and denigrate the achievement of our Government. They also spread lies about the wealth of Scotland, claiming that we’re too poor to be independent. The truth is that England is a cow, its head is in Edinburgh, and its udder is in… Read more »

Rejoin the EU, or stay outside?

The choice that Wales can only take as an independent nation !

The Bellwether geography insight of the value of an island Nation like Iceland, that surely aided it’s cause to independence , reminded me if a short poem by the late Harri Web and published in his book Poem and Pints
named ” Our scientists are working on it ”
” What Wales needs, and has always lacked most is, instead of an eastern boundary, an East coast”.

But there are powerful arguments made by Neil, besides a damn good football team! I just wish.

Iceland is a place where you find what you want to find. I don’t recognise the iceland you visited but can see how you found what you wanted to find.

Please note iceland sits on a major fault line and Wales does not. Might have something to.do with energy independence and being able to grow bananas in winter.

> Please note iceland sits on a major fault line and Wales does not.

How is that relevant? Are you saying that only countries situated on a fault line can be independent?
And as for energy independence – Wales is a net *exporter* of electricity. We obviously generate more than we need. We can’t grow bananas in winter, but neither can Canada, and it doesn’t seem to trouble them too much.

Look at yourself in the mirror, Clive King. Are you proud of what you see? So negative about Wales. The best I can do for you is that you and McEvoy look at the the same Iceland, the same glass. He sees it as half full but you see it as half empty. OK, lets talk about energy. Do you suppose that Icelanders were or are like primitives and that the “bananas in winter” (why so mocking?) or more genuine projects just happened, or were all started by the departing Danes who were like the British in India ie superior… Read more »

Diolch am hyn Neil McEvoy Yes foreign travel broadens the mind – lets you see how others deal with similar problems: in our and Gwlad yr Ia’s (Iceland’s) cases an overbearing, bullying neighbor. Yes, we absolutely need an independent Cymru. This will not however come easily. Cymru has for centuries been colonised by ‘them next door’. The mindset of most inhabitants of Cymru is much the same as that of those living in England. This process is ever accelerating. Most of the people in Cymru have not just let the language go, they actively hate it – that’s just one… Read more »

Don’t quite understand the line about the tour guide not describing herself as a nationalist and “nor would I”. Neil- there’s no reason for that lady to describe herself as a nationalist as Iceland is an Independent country! We are only nationalists in Wales since we seek the same freedom as the Icelandres enjoy. Once we’re Independent, people can choose whatever political identity they want- there will be no need to be nationalists! In the meantime, we can only be nationalists if we wish to see the emancipation of our country.Get real. Apart from that- a decent piece. If we… Read more »

Neil McEvoy, spot on. You are a real asset to our Plaid Cymru.

Well, this morning we are seeing the collapse of one of the UK’s largest infrastructure management and construction companies.
Does this say something?

That the UK is not a financially safe haven for Wales.
Most possibly a similar situation would not have happened in an independent Wales as we in Wales do not have a political climate driving such a system of outsourcing. Anyway, we would have had more secure regulation of organisations building and maintaining public infrastructure.
We cannot afford not to be independent !!!!

I would suggest cross-studies be done with the teaching of Icelandic and Welsh, and if we should import teaching and cultural promotion methods to Wales.

I agree with you there. The lack of availability of Welsh films online, (thought I did find ‘Hedd Wyn’ recently on the BFI website, viewable for free, but don’t know if it can be streamed outside the UK: https://player.bfi.org.uk/free/film/watch-hedd-wyn-1992-online) is a national disgrace, though I also think Cymru should be producing more films than it does as well

Erthygl da iawn eto Niel. Plaid needs you back in there, and bring Dafydd El too, a broad church with a vision of a free Wales running and creating it’s own prosperity. Petroc ap Seisyllt

Dafydd El? What have you been smoking? The guy is a national disgrace in my opinion, and perhaps his name prefixed with Dic Sion?

You know what, Wales being ruled by Denmark would give a huge pay rise to everyone in Wales and make Wales richer per capita than England. lets go Danish.

A little nation like Wales could never hope to emulate an international power like Iceland that in recent decades has taken on the might of the British Royal Navy and won. Twice.
How could little Wales do what a nation of 330,000 Icelanders had achieved.
That’s very nearly the population of Cardiff for goodness sake!