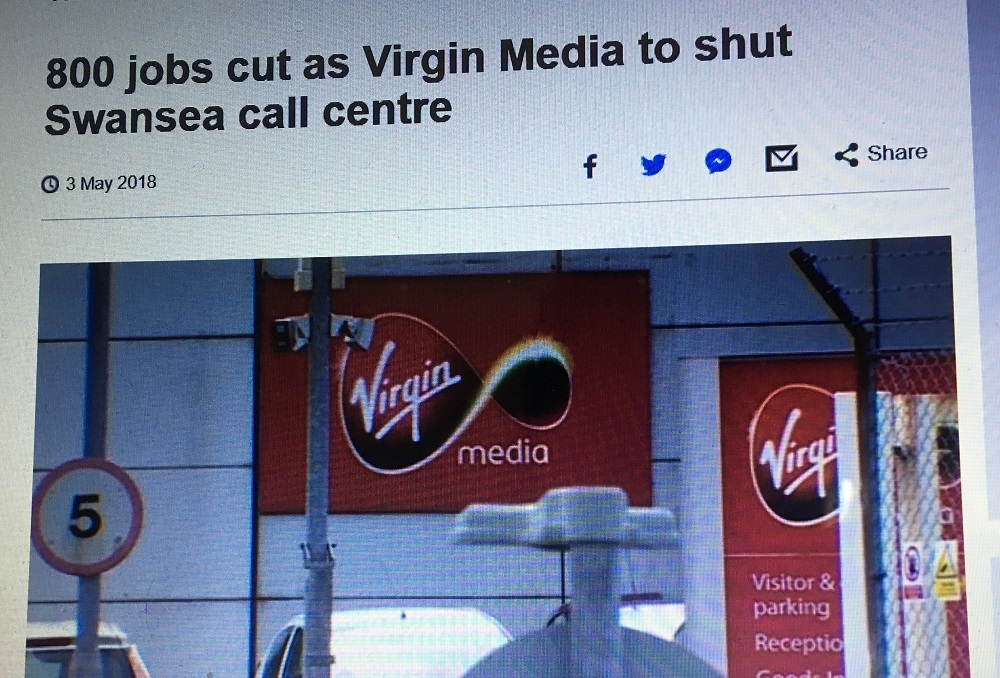 It was announced yesterday that 800 jobs would be cut as Virgin Media closed their Swansea call centre.

In this article previously published on the Click on Wales blog, Daniel Evans argues that the Welsh Government’s economic strategy of using grants to attract multinational corporations rather than supporting internal growth is inherently flawed.

The Welsh economy is once again performing badly. The Welsh news has a distinct groundhog day quality, such is the steady stream of horror stories about Wales’ desperate economic situation.

This is not a new problem. Wales has been one of the most impoverished regions of the UK (and indeed Western Europe) for much of the twentieth century. Sadly, this is unlikely to change any time soon.

The Welsh Labour government has increasingly focused on foreign direct investment (FDI) as its main solution to Wales’ problems. FDI is widely celebrated in Wales and generally seems to be viewed as a panacea to all our woes. This way of thinking seems to be accepted by all parties, even the supposedly more radical ones such as Plaid Cymru.

And why not? After all, the term investment conjures up images of raising people up, of improving things.

But this way of thinking fundamentally misunderstands capitalism. Wales’ persistent poverty is not an unfortunate accident, but is an inevitable and indeed a necessary feature of the capitalist system.

As Calvin Jones brilliantly noted previously, in order to change, we first need a grasp of history and the nature of capitalist development. We need to understand Wales’ function within global, European and British capitalism.

Capitalism is driven by a relentless quest for profit. Profit is increased if costs are low, and labour (i.e., people) is a cost which needs to be kept low. This is achieved by paying workers less, by giving them fewer benefits and so on.

All the things which make work tolerable — breaks, healthy and safe working conditions and so on — are viewed by bosses and owners as unacceptable costs which eat into profits.

This is why groups like the CBI and their allies in the Conservative party are always moaning about the minimum wage, health and safety regulation, maternity leave and so on.

Capitalism constantly seeks to discipline the workforce, to keep it pliant. One of the main ways that workers are kept in line is through what Marx calls the ‘industrial reserve army’ of unemployed workers.

The existence of this huge pool of surplus labour allows capital to set the working conditions that it chooses. Although the Daily Mail claims otherwise, people do not live comfortably on unemployment benefit, and therefore being exploited at work is still preferable to the precarious existence of the unemployed.

So we work hard and accept poor working conditions because we know we are easily replaceable, because the alternative is even worse.

Viewed in this light, unemployment is not, as Conservative politicians claim, an unfortunate accident of austerity, but rather a necessary and desirable outcome of efficient capitalism. This is why the Thatcher government deliberately drove up unemployment.

Dividing up production between places is entirely logical and efficient: some regions will be the favoured location for technical production and headquarters because they possess a more highly educated population.

Meanwhile, manual assembly work will be located in impoverished areas with a large reserve population of unskilled workers.

Capital’s inherent mobility means that firms are never tied to one particular region. Once they have squeezed as much profit as possible out of a region, they have the ability to move to new regions at a moment’s notice.

Moving around rather than settling in a particular place may seem counter-productive, but it is vital to realise that the current model of capitalism is based on a short termist version of carpet bagging.

This mobility means that capital can be thought of as a wave breaking on the beach: investment washes over an area, bringing jobs and development (exemplified by ‘boom towns’).

Yet this development is necessarily temporary: once the region is no longer profitable (perhaps labour may be cheaper in a different area, or perhaps workers are attempting to organise themselves and to demand better working conditions and therefore eating into profit), investment will recede like the tide, leaving behind devastated communities, the detritus and sediment left behind by the retreating wave.

Capitalism ultimately creates for itself a ‘reserve’ of places, in a fashion analogous to the aforementioned industrial reserve army of workers.

So just as more workers than necessary are required (so that the reserve workers may be thrown into the breach when required, and so that existing workers’ wages can be suppressed), so there are more regions (i.e. concentrated pools of labour) than necessary available to capitalism.

There will never be enough work to go around, and this is particularly the case in our post-industrial epoch where meaningful, productive work has been rendered superfluous.

These places which are left behind constitute what Richard Walker calls the lumpen geography of capitalism.

The term ‘lumpen’ comes from Marx’s concept of the lumpen-proletariat. For Marx, this ‘lumpen’ strata were the unemployed or unemployable, the lowest of the low, who he contrasted with the noble industrial proletariat.

Yet today ‘lumpen’ should simply refer to a condition of perpetual marginality and precariousness. In other words, the ‘precariat’ tends to be concentrated in certain regions.

Within the larger mosaic of global capitalism, it is very useful to have these ‘ready-made’ regions, these geographically concentrated pools of cheap, desperate labour. Capitalism needs these depressed, undeveloped regions.

Ultimately, lumpen regions are attractive to investors because the costs of labour in these areas are so low they can be extremely profitable.

Wales is a lumpen region

Firms ‘investing’ in Wales can enforce the employment relation they choose.

Whereas in other regions they may potentially have had to deal with higher worker expectations and a less desperate workforce which demands better working conditions, in Wales everything is entirely on their terms.

So ‘investor’ firms can pay workers less, they can hire and fire workers at will, and so on. The permanently low labour costs in Wales means firms can make more of a profit.

Logically, the jobs which are created in lumpen regions will almost always be unskilled or semi-skilled, on top of being necessarily temporary.

Again, this is the case in Wales. What’s more, firms can keep coming back to Wales- they know that if they need to establish a branch plant there will always be cheap, compliant labour here.

The role of local political elites

Lumpen regions compete against each other for FDI, for the ‘privilege of being struck by lightning’. Welsh politicians fall over themselves to attract this ‘investment’, offering lower land rates and other grants to investors.

The establishment of the Welsh Assembly has given Wales a head start over, say, the North of England in this race to the bottom. Wales’ ‘trade missions’ which claim to be ‘selling Wales to the world’ are essentially pimping Wales out, trumpeting how cheap its workforce is.

One of the pillars of the Assembly Government’s plans to secure FDI is advertising the fact that salary costs of Welsh workers are 40% cheaper than the UK average!

Where desperation among the population is all pervasive, local political elites gain political capital from attracting investment and creating jobs, even if these jobs are unskilled and short term, and even if the developments are damaging to the environment.

So whoever secures these ‘jobs’ through ‘investment’ will necessarily win over the desperate populace.

This is why attracting FDI very much suits the Welsh Labour Party in the Welsh Assembly. It does not matter that such investments are unwise.

Welsh Labour can also effectively renounce all who dare to oppose their short termist strategies as being ‘anti-investment’ or ‘anti-job’.

Mark Lang poses the question ‘why grow your local economy in a sustainable manner when you could just attract multinationals and create 2726 new jobs instead?’

The answer is simple: the desire to attract headlines and to maintain political control of Wales. Economic strategy is motivated by the desire to retain power.

Equally, the desire to avoid bad publicity is why the Welsh government will ‘subsidize’ businesses not to leave Wales.

Whilst Wales’ stagnation is not good for the folk who live there, it is extremely virtuous for capitalism and for local political elites.

As long as there is a vested interest in it remaining poor, Wales’ poverty will continue.

FDI is therefore a false idol: the ‘investment’ that occurs in Wales is parasitic. Firms come in, make a profit, then leave.

They only stay if the Welsh government, desperate to avoid bad press, provides them with ridiculous subsidies from the public purse.

There is absolutely no chance of FDI benefiting the Welsh economy, for the decision to invest in Wales is not benevolent, as portrayed in the press, but driven solely by profit.

Capitalism is compelled to present itself as the only game in town. We are always told ‘there is no alternative’.  Yet across the world, people are slowly beginning to wake up.

It is imperative that we ask radical questions and interrogates the economic orthodoxy which has resulted in misery for much of the world’s population.