Best of 2021: A selection of cultural highlights of the last 12 months

Continuing our week long review of 2021, more writers, actors and artists – and some of the Nation.Cymru gang – share their cultural highlights of the last 12 months.

My cultural highlights of 2021: Visiting Vienna, thanks to a Wales Arts International IOF award, where I immersed myself in the museums, galleries, and rich architecture of the city, researching artworks only previously experienced through books.

A lifetime highlight was spending the day in the Natural History Museum with The Venus of Willendorf, an 11.1 cm tall Venus figurine estimated to have been carved around 25,000 years ago.

Experiencing the powerful textile portraits in the exhibition The Wakelin Award 2020: Anya Paintsil and the installations of Carlos Bunga’s Terra Ferma, both exhibitions at the Glynn Vivian Art Gallery in Swansea.

Seeing Ackroyd and Harvey’s grass banner with the writer Ben Okri’s words floating on the Thames, beside Tate Gallery in London, and witnessing The People’s March on the last day of COP26 in Glasgow reinforced my conviction that the planet needs us to act.

Enjoying the 2007 novel, set in Penang, that I had long wanted to read, The Gift of Rain by Tan Twan Eng – “Now that I am old I find that the rains follow me and give me comfort, like the spirits of all the people I have ever known and loved.”

My personal theatrical highlight has to be the debut performance of Bethan McLean in my own play The Merthyr Stigmatist. She was completely electric as a 16-year-old claiming to have the stigmata. It came over in the stream but to have been in the room when she did that was a total honour.

Theatr Clwyd nailed it for me this year. The tone was set for its constant producing with Curtain Up – 15 short plays, 30 actors loving doing their jobs again, and joyous audience participation.

Music-wise, I’ve really enjoyed RWCMD’s commitment to streaming, especially their annual The Big Bash weekend in February which was a joyous global event.

TV-wise, Staged 2 and The Chair were real highlights. Film-wise, The Colour Room on Sky was (and still is) a real visual treat and A Christmas Number One (also on Sky) was (and is!) the perfect festive end to the year.

I have two young bookworms so follow the latest releases in children’s books. My favourite this year has been Sara Mai a Lleidr y Neidr from Casia Wiliam, publishd by Y Lolfa The series feels really truthful to what it’s like growing up in a modern Wales. 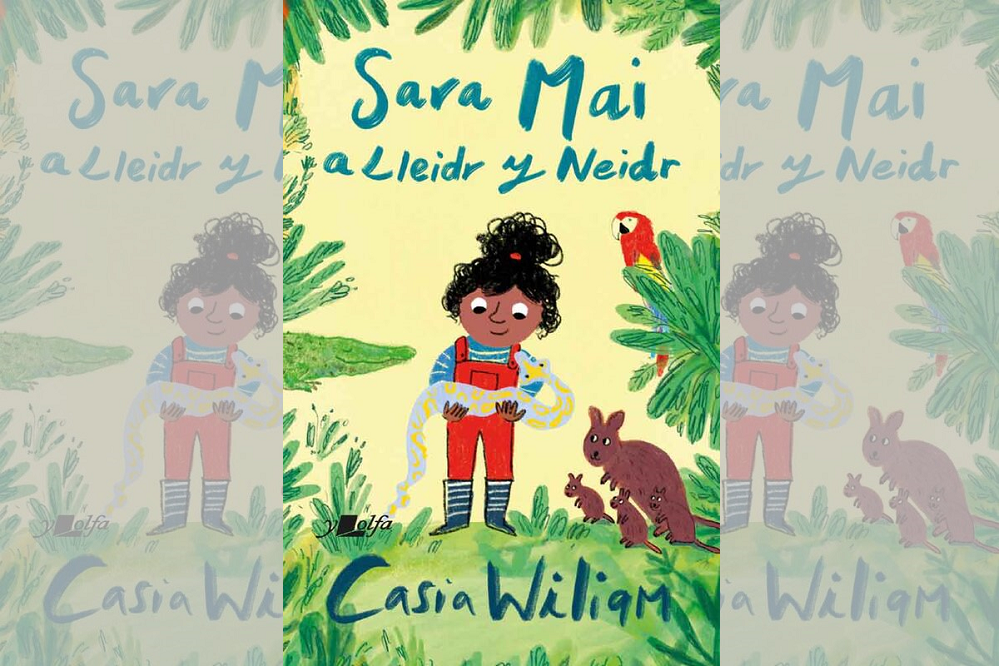 Lisa Parry write plays, screenplays and audio drama. Her work includes includes: The Order of the Object (Theatr Clwyd), The Merthyr Stigmatist (Sherman/Theatre Uncut) and 2023 (Illumine). Her work has been produced at: The Barbican, The Other Room, The Sherman, Wales Millennium Centre, Chapter Arts, Theatre 503, The Arcola, TACT Studio (Broadway NYC), The Arches, Bridewell Theatre London, Martin E Segal Theater (NYC). She has developed work with The Traverse, The Sherman and The Young Vic and she was one of Theatr Clwyd’s writers in residence in 2020.

I have two cultural highlights for 2021. The first involves me personally. I was lucky enough to be cast in The National Theatre’s new production of Under Milk Wood. UMW was tired. It has been staged/filmed in so many ways over the years. Lindsay Turner’s take on UMW was innovative and relevant to the troubled times we are in.

There’s always recognition and laughter in UMW, but this production brought tears such was its resonance with the tragedies of today. I also got to work with some icons of the Welsh Theatre.

My second is Bara Caws’ production of Byd Dan Eira which I saw live online. This was the last play of my good friend, Sion Eirian, who died in 2020. A play dealing with the concept of Memory, beautifully produced and performed. Like Hedd Wyn, Sion never got to witness the triumph of his final masterpiece. An unique voice silenced far too early.”

Ifan Huw Dafydd works extensively across theatre, tv, radio and film. This year he appeared in Under Milk Wood at the National Theatre. His numerous theatre credits include: The Wood for Torch Theatre; Twelfth Night, Pavilion, As You Like It, Blackthorn, Festen, and History of Falling Things. His TV credits include 35 Diwrnod, Stella, Hinterland, Sherlock, Alys, The Indian Doctor, Gavin and Stacey, and his radio credits include Curious Under the Stars.

The highlight, without doubt, for me is the partnerships we have forged over the years and most recently during Covid. At Theatr na nÓg, we are proud of our associations and relationships and with whom we co-create theatre for audiences throughout Wales. 2021 highlighted to us the importance of these collaborations and networks.

Although the year was stop-start and stop again, it gave us the time to nurture our partnerships and relationships. Such as our longstanding relationship with Swansea Museum and The National Waterfront, where we produce performances for our schools’ audience.

Our wonderful collaboration with Theatr Brycheiniog, where we presented We Need Bees for young children and their families in June.This outdoor production proved to be our only live theatre performance this year. What a joy it was to see young children watching theatre out in the glorious sunshine.

Our newly formed Consortiwm Cymraeg with Theatr Soar, The Welfare Ystradgynlais and Awen Cultural Trust. The Consortiwm’s first collaboration will be the Welsh language version of Shirley Valentine, which tours Wales in the Spring.

And finally, our co-producing partnership with Aberystwyth Arts Centre will see our musical show Operation Julie performed live on stage in 2022. Without these organisations and the individuals who work there, we would have found it almost impossible to continue producing our work – their support, generosity, and care for one another has been overwhelming. Long may it continue beyond Covid. Here’s to 2022.

Geinor graduated from RWCMD in 1991 and worked with Dalier Sylw before joining Theatre West Glamorgan (now Theatr na nÓg) as their resident stage manage, becoming the artistic director in 1998. Since then has directed over 30 productions for the company – from Cyrano to Cider with Rosie; from a one-man show about an evolutionary scientist to musicals about a sexy Welsh singer! She has written 13 plays which have been performed from Brackla to Brazil.

Top of the reading pops for me was Pain Sluts by Sian Hughes, a remarkable collection of short stories, which I consumed one tasty morsel at a time, up there with the perfectly accented Audible rendition of Milkman a superbly powerful story by Anna Burns.

A revisit to The Bridge, and a first outing of Sopranos in binge mode, along with the new and improved series form of Stig Larsson’s Millennium trilogy, filled me with awe at the exquisite potential of long story telling.

My true crime gene was deeply satisfied by The Investigation, the recounting of the murder of journalist Kim Wall in a home-made submarine by a man who is neither mentioned by name or characterised in this unusual dramatization, which focuses instead solely on the impact and the solving of her murder.

Dance Days, the brilliant free open air dance festival, curated by Taliesin Arts Centre in Swansea, was my only involvement in anything live this year, rising to the challenge of the pandemic and social distancing by delivering great dance on under used bowling greens in parks around Swansea, filling all who watched with optimism and hope that new normal can work very well.