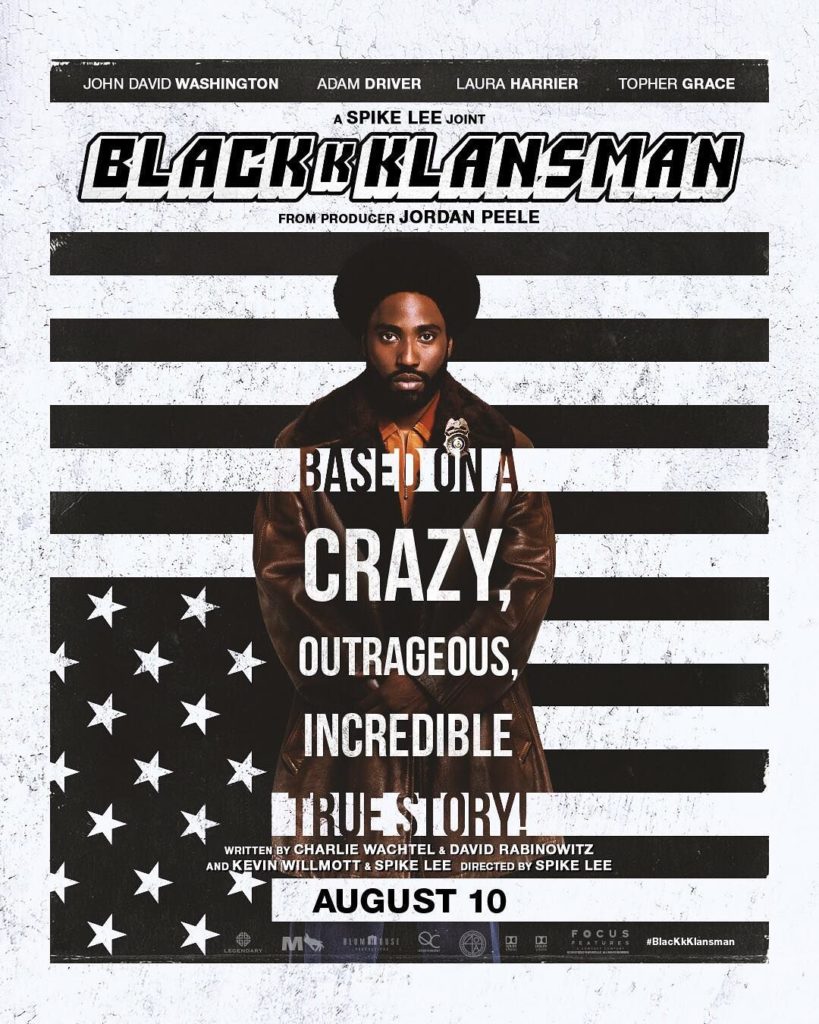 Ron Stallworth (John David Washington) is Colorado Springs first black cop and just the catalyst to herald a daring new mission for the sleepy precinct. Infiltrating the KkK. After Ron strikes up telephone contact through a, ‘Do you believe in White supremacy’ newspaper ad, he enlists Flip Zimmerman (Adam Driver) as his white avatar to meet with the Coloradan chapter.

The film begins with an Americana style infomercial video, black and white aesthetic, White over Black meaning. Alec Baldwin channels his SNL take on Trump – the first but by no means the last skewering of the caustic man-child – as he offers ultra-right-wing Conservative rhetoric as The Birth of a Nation (DW Griffith’s landmark 1915 film that didn’t just advocate white supremacy but perpetuated it) is projected behind him, on him, through him. This scene sets the tone for Blackkklansman, funny, frightening and fierce.

Ron’s idealism and integrity are alluded to within his initially perfunct roles as a Police Officer filing reports and doling out profiles to his racist counterparts. He insists on black suspects being called ‘human beings’ and refuses to agreeably objectify an actress that his colleague is pining over in a magazine. Then comes the self-realisation of his character when, undercover in an excited crowd to gain intel on Corey Hawkins’ charismatic turn as Black Rights activist Kwame Ture, Ron finds agreeance with the man although his duty may deny him holding those views.

This being a Spike Lee joint, it is rife with social commentary, polemic politics and scathing satire. He explores much in the two-hour run time, but a central question is, What would you do when faced with this systematic subjugation? Black people must always – lest they be labelled animalistic, sub-human, inferior – exude composure in the face of animalistic, sub-human, inferior behaviour. Even when that comes from cops. And yet, they still aren’t allowed to meet the white yard stick they’re always measured against. Lee understands the hypocrisy of citizenry and the expectations toward black people, of course he does – check his filmography- but here he isn’t as much holding a portrait of racism as he is a glistening mirror. One with more stinging truisms than the that which is asked, Who is the fairest of them all? The answer is screamed throughout the film by slack-jawed, blindly ignorant supremacists. Amidst scenes of police brutality, cross-burnings and many a moronic meeting, rhetoric is shown as the villain. Words don’t have to be true to brutalise.

It isn’t just racism against the African American peopple on show here, as is usually synonymous with portrayals of the KkK. Anti-Semitism is rife within the drooling rhetoric and is as timely a takedown as white supremacy. The tension of the film can often be found in the infiltration scenes of the Klan meetings. Driver’s Zimmerman is a secretive, apathetic Jew and only in having to fervently deny his heritage does he realise that he shouldn’t have to. As ever, it’s a pleasure to watch Driver. Zimmerman’s arc is as moving and empowering as Ron’s and the actor’s chemistry is charged with a quiet camaraderie and respect.

Blackkklansman as a whole is a little imbalanced, in pacing and humour. Whereas some of the tension during the infiltration scenes is deftly managed, some feels too forced, tries too hard to make the audience gasp. There is plenty on show to do that and those scenes showcase weaker dialogue and erratic cuts attempting to juggle the shifting tones. This is a shame as Blackkklansman has the potential to be a masterpiece, but its second act is too rickety. It’s a good film but a great movie. There are shots that miss the mark and take you out of the story, and small conceits that delve into Sit-Com which this definitely is not. But there are three great scenes for every one that doesn’t quite hit the mark. Monologues and speeches from varied Black cast – verbal gems often pouring from Laura Harrier’s Patrice) contrast those of the bigoted Whites. Empowering where the Klan’s are defamatory. Unity over division. Beauty over ugliness. Equality not supremacy.

The third act is titanic. Lee and Co. showcasing the other times times lacking balance and dexterity. The power of a movie is exposed in the Third. Not only within the movie itself but about the aforementioned The Birth of a Nation. Ron/Zimmerman’s initiation ceremony is intercut with a soft yet rousing speech from Harry Belafonte’s Jerome Turner, speaking on a lynching of a disabled friend as a child. This sequence is perfectly drawn out, taking its time with the hard-hitting beats and wringing them for emotional gravity. Whilst the Klansmen whoop and holler at the ritualistic screening of The Birth of a Nation – reminiscent of Jarhead’s soldiers getting riled up from Apocalypse Now but more sinister –  Patrice and her fellow activists and Panthers listen to Turner contextualise the film, revealing its tragic impact on America, then and now. The power of Film, how it can incite and empower, coax and deny, enrich and destroy, is showcased wonderfully in metaphor and, prodigiously in the form.

Whilst Blackkklansman isn’t a masterclass in filmmaking, it is a masterful insight into a social history damned to repeat itself. From the same team as Get Out, the material mines a similar vein of bigotry, social hierarchy and racial prejudices. Whilst not as thrilling as its counterpart, Blackkklansman may stand to have a greater legacy. And if ever a film should be shown at the Whitehouse to exemplify a social climate for having its finger on the pulse, its this. Though this true story happened in the 1970’s, Spike Lee has stitched it into our conflicted times with many nods to Trumpian populist rhetoric but also a sobering ending, showcasing our real world. Flip the flag and raise your fist, its time to fight the power.