There are calls for the programme that sends teachers from Wales to Patagonia to teach Welsh to continue after the pandemic.

No teachers have been able to travel to the region of Argentina since March last year, and some are worried that they won’t be able to do so for a long time yet.

Argentina is currently on Wales’ red list and the advice from the Welsh Government is to not travel internationally.

She told BBC Cymru Wales: “This is the first year that every bilingual school had their own teacher and there were three taking part in the project with the qualifications and the skills we were looking for.

“The teachers had arrived, but within the month there was the lockdown, therefore that was very difficult.

“The project is funded through the British Council but the Welsh Government is responsible for putting the money in.

“We’re seeing so many projects disappearing, like Erasmus for example.

“We just hope that this project will continue with support from the government. Not just for us in Yr Wladfa, but also for the people of Wales to be proud of.”

Marian Brosscho, one of the teachers from Wales who went to Patagonia last February as part of the British Council’s Welsh Language Programme in Chubut, stayed in Trelew for a few months and continued with virtual lessons.

She told Dros Frecwast on BBC Radio Cymru: “I’d been working online throughout the years, then came back to Wales over Christmas with the intention of going back this February.

“But of course, that didn’t happen, therefore I’ve been working online from Wales.

“One part of our work is to conduct social activities to bring people together in order to use the Welsh language, which obviously is a bit of a challenge.”

Second best flag in the World…when I was in Coleg Harlech there was young lady from Patagonia there studying for a year. She spoke Spanish and Cymraeg but no English, boy was she popular…

You could say that about a lot of places e.g. Iceland, Faeroes, Australian outback, some of the US states on the Great Plains.

My point being that people obviously like living in these places otherwise they would move.

I would live in Argentina but properly not patagonia.

To me ‘proper’ means formal behaviour like table manners, or ‘fit for the purpose’ like a good bed, computer, car. But a country or province cannot be proper or improper unless it’s in collapse perhaps like Afghanistan. Both Argentina and Patagonia are functioning societies so far as I know. Perhaps what Llewelyn means is she likes one but not the other. That does not make one proper and the other not.

Is that the right flag?? I thought the Welsh patagonia one was like the Argentine one, but a dragon instead of the sun?

Yes, im aware of the Argentine flag, its been around since the 1820s.

I’m talking about the wladfa flag, that is the same as the Argentine flag, but has a Welsh dragon instead of the smiley sun. That was my point.

Not difficult. This is the official flag. 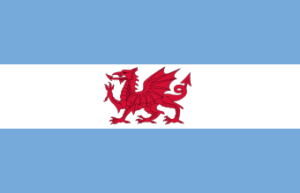 The flag in the photo is the old one, Llewelyn’s post shows the modern version. https://www.crwflags.com/fotw/flags/ar-u_w.html

I wouldn’t mind going to Argentina one day.

I went in 1981 and had a great time, I should go back again hopefully 😊