Cynefin – A Sense of Place: Fields of Gold

The landlocked sea of seeding grass is waiting to be cut. Wave upon wave of soft pink, beige and bronze sprinkled with the yellow of dancing field buttercups ripple and flow across the slope, only ceasing when they hit the dark green boundary of a hawthorn hedge.

Under a sky the colour of a newly shorn sheep, a sweet and earthy, slightly sickly smell of a sun-kissed meadow permeates the air and it feels muggy and close. It’s typical fly weather.

Growing in the hard-baked soil either side of the gateway, an underlay of low growing pineapple weed softens my footsteps. The plant seems to like the area around gateways and paths so it must like being trod on.

The small yellow with-a-hint-of-green petal-less flower heads are acorn shaped and when its feathery leaves are rubbed, they do smell of a ripe pineapple. They are apparently a good insect repellent and you can make a pineapple crush flavoured tea from the flowers.

Higher above the bank and under the sweep of collapsing grasses, dark green rosettes of primrose leaves nestle close to the ground.

In Spring, their pale yellow flowers gleam in the shade created by the sycamore tree. They like being at the top of ground that slopes slightly, as even though they like moist soil, they don’t want their feet wet all of the time.

I walk widdershins around the perimeter of the field. The hedgeline to the north consists mainly of gorse and was once straggly and sparse, but since severe pruning several years ago, it’s become a tight knit, prickly barrier, with a few scrapes of bare earth at its feet where the sheep take shelter.

The bushes seem to be almost permanently in flower, a fluorescent, eye blinding yellow in full sunshine. On such days, the smell of coconuts from the gorse flowers permeates this side of the meadow, but on this hazy day, the flowers are sulking tight.

A few honeybees are trying in vain to gain entry but without success and a fluffy amber-tinted common carder bee meanders to the pink of a blackberry flower instead.

The gorse flower has a clever mechanism to ensure pollination. The first bee to land on a newly opened bloom triggers a spring so the bee is dusted with pollen and at the same time, the style touches the bee’s stomach and picks up any pollen from the bees previous foray.

Gorse, also known as furze, or eithin in Welsh, is a member of the pea family and is a pioneer plant, which means it can colonise poor soils by fixing nitrogen from the atmosphere via its roots.

Historically, it was considered a useful plant, as it provided fuel for bread ovens, fodder for livestock, and when the branches are tied, as a brush for floors and chimneys.

In Celtic mythology, gorse was burnt at Beltane because of its flammability, and is considered to represent the sun and the god Lugh – the Celtic god of the sun and summer – and is believed to offer protection and optimism.

When dry, the seed pods of the gorse are long and black and dusted with white hairs. On a sunny afternoon, you can hear them pop as they twist and crack open, dispersing their seeds up to three metres away.

There are pockets of gorse all over the farm, mainly where the ground is rocky and soil is thinnest and the plant can spread quickly if not controlled, being able to cover a field if not managed by man or beast. It’s forever on the march in search of sunlight…

I run my hand along the top of the wave of grasses. They feel soft as feathers and tickle my palm. Holding one stem just below where the biscuit coloured seed heads begin, I pinch it between thumb and index finger and pull up all the ripe seeds as I go, slowly letting them drip through my fingers onto the sward. Hopefully some seeds will germinate, leaving a memory of me amongst the new growth.

After a heavy dew, they hold so much moisture, it’s almost as if it’s been raining, my jeans becoming soaked to mid-thigh, the denim dotted with the embroidery knots of tiny seed pellets.

Grass is an incredible plant. You can cut it, flood it, freeze it, dry it, and it nearly always grows back. Varieties of grass are probably the most important economically important plant family in the world.

We use it for food clothing, animal feed, insulation, biofuel, baskets, paper, clothing, thatching, to prevent soil erosion, as a surface for sport. And for making hay.

The weather has to be just right to make good hay. Three days of dry weather is ideal – one to cut, one for tedding (turning), one for tedding, raking and baling. It can be very technical if you’re so inclined.

The moisture content of the fallen grass is measured – it should be les than 20 percent before baling– but for small scale farming such as here, it’s cut, dried and baled when there’s a window of dry weather. An uncommon event in west Wales.

We used to make silage – cut grass wrapped within 24 hours, so the grass becomes pickled and is easier for the sheep to digest – which is not so weather dependent, but this year a neighbour is cutting it for hay as I have no sheep to feed it to.

I’ve placed a bench at the top left hand corner of the field and positioned it so you can see a sliver of the sea on a clear day if you sit and stretch your neck as tall as you can. Looking east and south, the fields and hedges of Penbanc stretch outwards, and meet up with those of my neighbours – nature knows no boundaries.

The only blot on the horizon, literally and metaphorically, is the quarry opposite, which has just had permission to expand. A once green field is now a gash of terracotta as they’ve removed all the topsoil.

I can sometimes ignore the visual aspect of the quarry, concentrating instead on the stands of sycamore and ash that block it out if I get my angle of vision right, but it’s the sound that irritates after a while.

Not the distant noise of machines, as contrary to popular belief, the countryside isn’t quiet all of the time. There’s always the sound of a tractor, a chainsaw or an unrecognisable machinery noise somewhere, as well as the calls of sheep, cattle and cockerels and the occasional crack from a shotgun.

It’s the insidious, piercing, metronomic beep…beep…beep… of the diggers reversing, that gets on your nerves.

It’s silent so far today. The only thing I can hear is the whisper of the grasses and the rustle of sycamore leaves; the pink of a chaffinch; a distant coo from the pigeons in the dutch barn; a male blackbird alarming.

Overhead, a plane cruises to America. A solitary herring gull the same colour of the sky floats seawards towards Ceibwr bay, and brown butterflies – ringlet, meadow brown, gatekeeper – lilt and weave their way through the vegetation in search of nectar or a mate.

When they’re all together, it’s hard to tell them apart, it’s only when they still and rest upon a leaf or a flower that I can tell the difference.

The ringlet is dark and velvety, the colour of hot chocolate without any milk, and has barely visible eye spots; the meadow brown is nutmeg brown with two eye spots, and is slightly larger, whilst the gatekeeper has warm orange wing patches bordered with chestnut and has two highlights within each eye spot, which look like flashes when the wings open and close.

In the centre of the field is a shed where the pump and filter for the spring water is situated, exactly where the spiritual diviner said the well would be. There’s a fence surrounding it, so no animals can get in.

Dave planted three apple trees, a pear and plum tree in the space. The pear refused to put up with the rain, wind and damp and succumbed after one year, but the others are growing, slowly.

The red-over-gold, egg shaped fruit from the Victoria plum is loved by the wasps so it’s a fight to see who gets to enjoy its sticky sweetness first, and one apple tree has so far failed to produce any fruit, but I like my mini-orchard.

It’s good for the insects and birds, if nothing else. 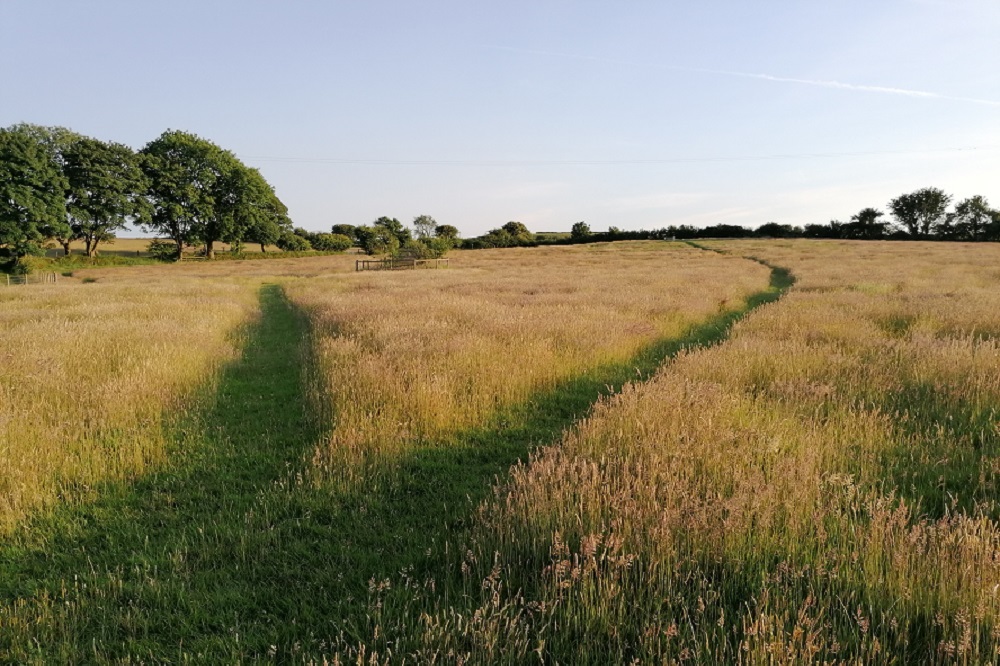 Tiny insects rise up from the ground as I winnow through the grasses and behind me, I see the grass-trodden evidence of where I’ve walked.

The red, cream and shimmer-blue flash of a swallow skims past, forked tail streaming, a bird which looks like it flies just for the pleasure of it. It twists, rises, then scoops low, attracted by the insects disturbed by my feet.

A second one joins the first, then a third, and they bank and turn and dive, searching for food, twittering and chattering all the while. Two more are perched on the telegraph wire, waiting to join the chase or to be fed.

I once counted over 100 birds gathered on the same wire as they readied themselves for migration, and ten years ago we had 15 pairs nesting in the old barns.

Even though the barns have stayed the same, I’ve made wallows when the ground is dry and never use any chemicals on the land, the number of pairs has got less every year.

This year, there’s only five, and I don’t know what else I can do to change that.

Some things are beyond my control.

Gaynor Funnell is the winner of the Nigel Jenkins award for 2022. We are delighted to be publishing a series about Penbanc over the coming months, with support from the H’mm Foundation.

You can read the serialisation so far here and you can discover other writing by Gaynor on Nation.Cymru by following her link on this map