Dafydd Iwan has reached number one in the iTunes chart after a battle for the top spot with Kate Bush.

Following a campaign launched by Wales fans to get Dafydd Iwan ac Ar Log’s folk anthem to the top spot, the song has rocketed up the charts.

The track had surged 34 places in the chart to number two following Wales’ qualification for the World Cup on Sunday, racing ahead of such music giants as Lady Gaga and Harry Styles.

However, this afternoon it took the top spot from Kate Bush, whose ‘Running Up The Hill’ single, had previously held firm in the top spot.

The resurgence of the Kate Bush track has come on the back of it featuring in the new series of Stranger Things, with a whole new generation of youngsters discovering the song.

However, Yma o Hyd has demonstrated its huge popularity after the song was sung before both the Austria and Ukraine games – and also after the World Cup Playoff Final in a special moment where Wales’ players gathered around for a rousing chorus. 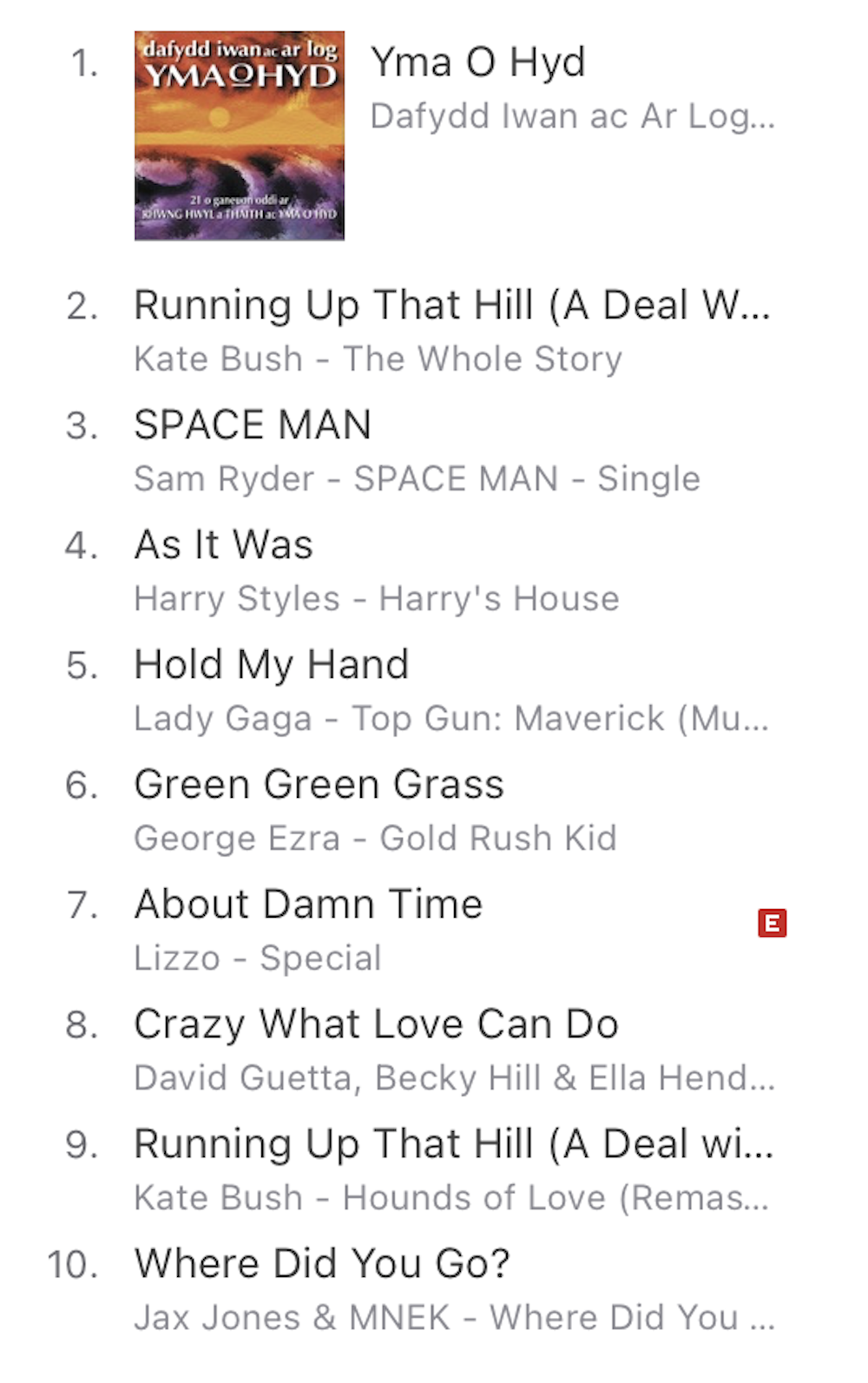 As for Dafydd Iwan himself, he says he is “so glad” that so many non-Welsh speakers have adopted the song as an anthem as well.

He said that the song had resonance to any team that had gone through hard times in the same way as Wales, which has had to wait 64 years to qualify for another World Cup.

“And I’m so glad that so many non-Welsh speakers have adopted it as well as their own, because that’s the secret of the survival of the Welsh language – it has to be owned by all the people of Wales, not just the people speaking Welsh,” he told Radio Wales.

Of the Welsh players, including Gareth Bale, gathering around to sing the song after the match, he said that it was a “tremendous experience”.

“And fairplay, you know, they knew the words very well. And they had obviously sung it before.”

I know it was done in 2020 but surely we can get Yma O Hyd back to number 1 in the charts by the weekend? We’re Wales…we can do anything ❤️🏴󠁧󠁢󠁷󠁬󠁳󠁿 I’ve purchased it again ❤️ Come on Wales, do your thing… we’re still here!! https://t.co/TyVZ4x2bA0

Speaking to Huw Stephens, Dafydd Iwan added that the Wales football team had been on a journey of discovering Welsh identity.

“And now, I mean, what’s happened with the FAW and the national team is brilliant, you know, because it’s been a gradual process of growing the Welsh identity of the team ever since the days of Gary Speed,” he said.

“And people like Ian Gwyn Hughes have worked gradually on this so that the team I think has bought into this idea that they are playing for more than the shirt you know, they play for Wales.

“When you hear Gareth Bale saying, ‘Oh, it’s such a great feeling to do this for our nation’. And you know, which nation he’s talking about, you know, there’s never any doubt.

“And it’s great they’ve identified themselves with Wales, and the language and the culture and the history. They’ve been to places like Aberfan and grave of Hedd Wyn and the National Museum National Library.

“They’ve been shown what a lot of Wales and Welsh history means and Yma o Hyd has come into its own because of that, of that context.”

Both great tracks. Both great artists. both have made me cry. But I’m glad Dafydd got No 1

You know what, it’s time the supermarkets, cafes and restaurants all over Wales got behind the national team and put YOH on their instore playlists.

In fact, if we have to have piped music in the public domain in Wales, shouldn’t Welsh music have no less equal status than Anglo-american muzak?