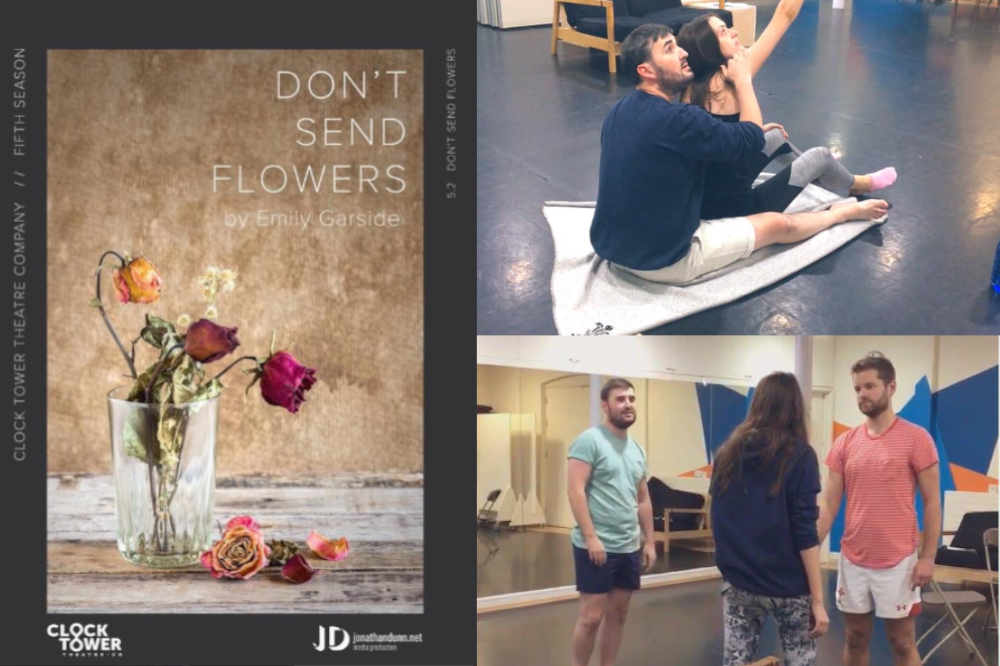 Nation.Cymru theatre critic Emily Garside’s play Don’t Send Flowers opens this week in Cardiff. Here she reflects on the process of getting it to the stage.

It began, as with much of my life with books. I could tell you the exact corner of the exact bookshop in Montreal where I had the idea for the play. And where for the longest time a scene of it was set.

That scene is still there. It’s just a little different now. Like much of it. The same but altered.

This play- the idea for it at least if not the form- is far older than I care to admit. Partly because there is a sense of ‘why cling onto something for that long’ the sense of self-doubt in ‘how good can it be then?’ But in taking it from the ‘play in the drawer’ to a play on stage, that there is a right time to tell every story. In the intervening years, I’ve changed and so when I came back to tell the story, so did it.

When I started writing the story, there was a lot of me in Grace. I poured a lot of my early 20s self into her. She’s the messy, confused…and yes frankly weird parts of me. Some of which I left behind, some of which linger on. But as I’ve grown with the play, I’ve aged into John. And I find a lot more of me in him, than I ever anticipated, and that’s both reassuring, and terrifying.

Music also played a large part in the writing of the piece-again. Music marks periods in our lives, and as writers, in our writing. In this case, ‘Will I?’ from Rent underscores a lot of the thinking. Again, of a time and place, when bits of this play first fell into place. The idea of asking ‘Will I lose my dignity, will someone care?’ is intrinsic to John’s story in particular. Alongside that further musical theatre underscores it- this shouldn’t be surprising, because musical theatre book-writers are playwrights with orchestrations to consider. Around a similar time ‘Next To Normal’ worked its way into my brain, and so for me the end of the play sounds like ‘Light’ in my head. Because I do think in sounds, in music.

My dyslexic-dyspraxic brain doesn’t think in 3D which is why I never became a director- I don’t see pictures, but I hear dialogue, and more importantly see the shape of a piece in music. And so those songs form what the play ‘feels’ like in my head. It’s a bit of those. It’s a bit of Waitress- ‘You Matter to Me’ it’s obviously a bit ‘Falsettos’ in ‘What Would I Do’. Oh, and away from musical theatre, Grace’s 20-something angst feels like Sarah McLachlan even though she’s far too young for that. Louis feels like 90s Indie Rock and John like 60s American rock- just out of step with his generation.

There’s also an entire playlist- some of shamefully embarrassing songs that scored the final writing. But thankfully that’s between me and Spotify.

The play is shaped by music, and a couple of key scenes- and from key moments in my own life. But between the idea and actually writing it, there was a pause, which also came to influence it. Because what also underscores it, in a strange way is my PhD. Surprising to lots of people, that I wrote about cancer not AIDS- given that’s what I spent 4 years researching. But what I really spent researching was theatre written as a response to grief.

‘We were supposed to go from disco bunnies to Florence Nightingale’ Tony Kushner said of the AIDS crisis. And that’s exactly what these characters are being asked to do. They’re losing a time they should be carefree- their early 20s, even their early 30s. And they’ve ended up crushed under the weight of illness- be it theirs or someone else’s. I spent the intervening years from getting the idea, to re-writing it, with my head in a lot of narratives about devastating illness. I spent four years researching how people wrote about the AIDS crisis. And every narrative that was powerful, every story that truly knocked me sideways, wasn’t about politics, it wasn’t about medicine; it was about people. And it was about people getting it wrong. Because there’s nothing more human than that.

That’s where the play came from. This weird mishmash of sounds, ideas, book-smart-learning and personal experience. And then it sat in a drawer. And then it got ripped out, pulled apart and put back together again in the process of getting it on stage. For new writing, as friend and fellow playwright Matthew Bulgo said to me during this process ‘It’s finished on opening night’ and there were, in all honesty times I didn’t believe this play would make it to an opening night.

There were times during that process I wanted to give up. I spent a good six months in perpetual anxiety, that weirdly was only soothed by actually ‘listening to’ the characters- that is locking myself away just with them and playing with the story. Those Sunday afternoons are still some of my fondest memories as a writer because these characters were – and are – a joy to write. But, in redrafting everyone there’s a fine balance between ‘feedback’ and ‘too many voices’. In not as a writer getting pushed away from the story you are writing and pulled towards the story someone else involved thinks they are telling. You sometimes need to trust your own voice. Or trust the writer’s voice depending on which side of the table you’re on. And in the process at times I lost my voice, on the page and in real life (such as it is). I let myself get drowned out, as a writer’s naturally introverted, naturally insecure manner is to be. In theatre we also try and please everyone too much. Out of fear sometimes. Collaboration is also key in theatre.  But equally as a writer you have to fight for your work sometimes (a thing friend and fellow writer Alun Saunders taught me. He also taught me to always channel Johnny Van Ness, another valuable life lesson).

Why tell this story? Why not just tell the story of playlists and cake samples, and auditions? Well because that’s only half the story. The bit between the first page and the final draft is different every time. And it can be frustrating, and endless and yes even disappointing. But there’s a couple of things to take away from pulling the curtain back a little there. Firstly that perfection on the page isn’t possible. A writer can’t magic a creative team’s vision into being on the page. That magic comes after- that’s why most of us write for the stage after all, to have our work made into something beyond what we imagined. Meanwhile nothing is perfect. To quote Sondheim ‘It doesn’t have to be perfect it just has to be’ (which is all very well if you’re Sondheim granted).

But most of all, all of us in theatre need to remember, as we create this work, this quote from the late great Nora Ephron. ‘It’s not personal, it’s business…what does that even mean? It’s personal to a lot of people, it’s personal to me.’ It’s always personal, but to me this was always one of those ‘heart and soul’ pieces, and to that end I don’t think I’ll ever quite recover from someone telling me what was ‘my’ final draft was ‘A disappointment’. But what I did do instead was pick that draft up and keep going. What’s more, what I did was make something I’m incredibly proud of.

And actually, no matter what weird mash-up of influences made this thing, no matter how winding the road to get here, it’s a story that’s personal to a lot of people. At least…I think that’s so.

Don’t Send Flowers is at The Gate on 6th and 11th of September.

It also can be seen at the Arena Wolverhampton on 20th September and Playhouse 2 Oldham on 21st September.