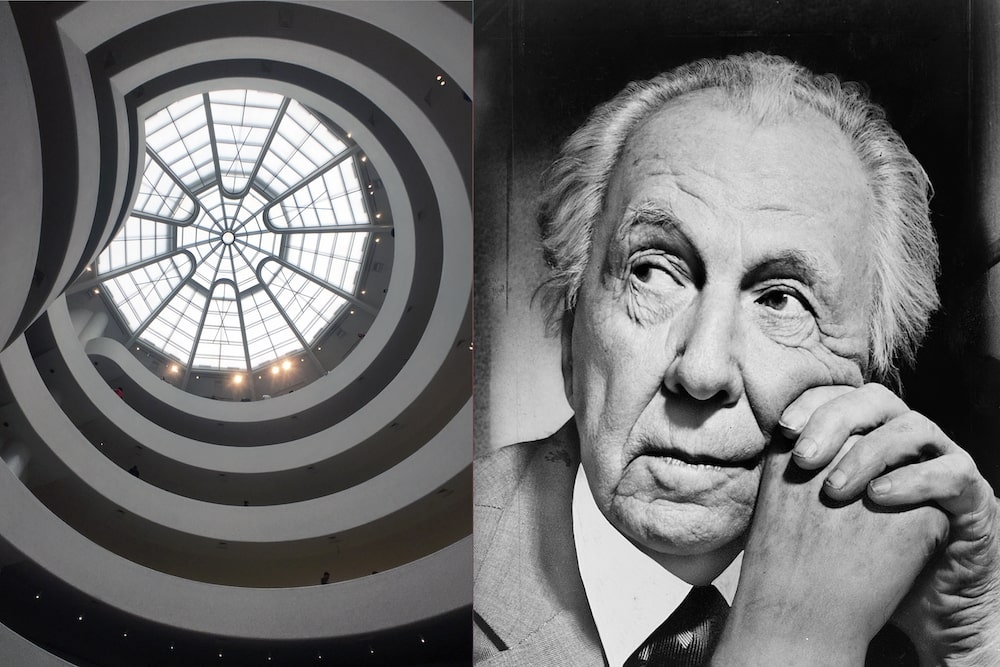 As America’s most illustrious architect, Frank Lloyd Wright is a household name recognised both inside and outside the cosy realm of architecture.

Ask almost any layperson to name an American architect and be not surprised when the words ‘Frank Lloyd Wright’ are confidently muttered to the tune of Simon & Garfunkel’s namesake song.

Known for his radical organic designs that sometimes denied their urban context, often rooted in profound meaning, and always inspired by nature, Frank Lloyd Wright and his five-hundred-plus buildings undeniably shaped a better world for living.

He gave reason, rhyme, and meaning to buildings and those fortunate enough to step over their thresholds.

As an architectural designer myself who has yet to take that step, a similar sense of reason, rhyme and meaning can be drawn out of his philosophy.

Although perhaps less compelling than being a physical actor in his carefully orchestrated compositions, his spoken and written words considering a building, its environment, its furnishings, and its impact on the human experience as one harmonious entity, still bears great weight in my pursuit of sensory-rich architecture; one that nourishes and reflects the old saw ‘we shape our buildings, thereafter they shape us’.

Better yet, as a designer who has moved to the US from Wales, it’s almost impossible to separate his own Welsh ancestry and upbringing from the philosophies, ingenuity, and defiance for which he is so renowned.

Remnants of Wales of late echo through the walls and names of his buildings today. In fact, his estate on the brow of a hill in Wisconsin – Taliesin – is named after the old Welsh bard whose name translates to “Shining Brow”.

It’s an inescapable reality that Welsh culture had impacted Wright’s flair and values, and during the current zeitgeist of galvanised Welsh identity and the resurgence of the Welsh language, it’s a difficult trait to overlook and understate.

Although he defined the open-plan way of living from his life in America, his story begins with his mother in Ceredigion, west Wales. Son of Anna Lloyd Jones and grandson to a Unitarian lay preacher, Wright was born in 1867 in Wisconsin after the family emigrated from Wales to escape religious and political adversity with local landowners.

Although born four thousand miles from his ancestral home, his Welsh identity, old traditions, and culture was imparted on him from birth in a small Welsh facsimile; one filled with art, storytelling, and the Welsh language.

Identifying their new home in Wisconsin with the landscape of Wales, the family would give the hills which surrounded their valley Welsh names; Bryn Canol (Middle Hill), Bryn Bach (Small Hill) and Bryn Mawr (Big Hill).

The principles he learnt there – adoration of nature, work ethic, and the necessity to question and disregard the status quo where appropriate – is what defined Wright’s organic architecture and its continuity between nature and design.

Perhaps his most widely-known building – Fallingwater – exemplifies this notion best. A formidable house springing from a rocky woodland waterfall, although visually dominant, the building remains a congruent extension of the landscape rather than a blemish within it.

Indeed, it was this revolutionary genius in crafting intangible thoughts into visual and physical materialisations that brought him back to his ancestral land on a one-off visit.

In 1956, Bangor University in north Wales awarded Wright an honorary doctorate degree. It was here he met up with an equally eccentric yet lesser-known architect, Clough William-Ellis, whose family claim a direct lineage to Owain Glyndwr; the last Prince of Wales to revolt against English rule.

Clough, best known for designing the Italian-riviera style village of Portmeirion, would serve as Wright’s guide during his stay in north Wales, indeed showing him the charming village nestled snug in the Snowdonia coastline.

As global architects hailing from shared ancestral lands, it’s not hard to imagine the two discussing the influence that a heritage rich in natural beauty and folklore had on crafting an architectural philosophy with concordance and sympathy to nature.

In fact, it was his desire to make a house “natural” to the valley of his Welsh-only-speaking grandparents that influenced his renowned Taliesin estate most.

For Wright, the true architect is a poet, hence, naming his personal estate after the Welsh bard held far greater meaning for Wright than a simple nod to Welsh lineage.

Wright thought of Taliesin as the epitome of the model artist; “a druid bard who sang to Wales and the glories of fine art”, and whose name reflects the truth and beauty of nature.

It’s unsurprising, therefore, that Wright proudly adopted the motto of his Welsh grandfather, Y Gwir Yn Erbyn Y Byd (Truth Against The World), a motto suggesting that truth rather than devotion to aesthetic standards is what contributes to great architecture.

From New York’s Guggenheim to Los Angeles’ Storer House, it’s a romantic thought that old traditions of Wales are engrained into the thousands of graphite lines that compose the architectural drawings of America’s most iconic buildings.

The failure of Wales to appreciate and capitalise on 🇺🇸 folk like Frank Lloyd Wright, Charles Evans Hughes, Howard Hughes, D W Griffith and even Jack Daniel & John Ll Hughes is such a missed opportunity.

Each was a leader in his own field and all were open in their love of Wales.

Kathleen A OBoyle
Reply to  Richard

I think that as an American of Welsh descent I can add to this discussion. My mother’s family came to northeastern Pennsylvania in the late 1880s. They were Protescent and spoke Gaelic, but primarily English. The were accepted by the predominant ruling class, the WASPs. White Anglo Saxon Protescents. They settled in Scranton,PA. The largest Welsh area in the U.S. Therefore, they were more successful in an area that was attracting immigrants to work in the coal mines from all over Europe, almost to a one, Catholic folk. In addition, the Welsh were already familiar with anthracite mining, initially as… Read more »

Richard
Reply to  Kathleen A OBoyle

It was once said by American president George Washington that ‘good Welshman make good Americans’. I often wondered what he meant by this statement until it dawned on me that unlike the Germans, Italians, Irish and French immigrants to the New World, the Welsh would often assimilate fully into American society often leaving no trace their former lives behind not to remind themselves of their past oppression, religious & language persecution. Where the others favoured recreating their own communities left behind in the old country like the Irish & Italians did in New York and other states.. and to quote… Read more »