On the face of it Belleville, Michigan and Machynlleth, Mid-Wales have very little in common.

One is situated 20 miles outside Detroit in the industrial north of the US, the other is a market town at the heart of rural Wales.

Scratch the surface however and an extraordinary story emerges – a tale of creativity, rebellion and defiance forged in the past and alive in the present.

It’s a narrative threaded through history that traverses borders, timezones and cultures.

The Welsh market town was the seat of Owain Glyndŵr’s Welsh Parliament in 1404, and as such claims to be the ‘ancient capital of Wales’.

Belleville, albeit a little younger, founded in 1847, lays claim to its own rebel history. The story of three young men who would define a sound and style of music that was pioneering and futuristic, pushing the parameters of sound.

Simply put, Belleville is the birthplace of techno music, thanks to three school friends who would become musical trailblazers.

Juan Atkins, Derrick May and Kevin Saunderson, commonly known as ‘The Belleville Three’ are known as the architects of techno.

Meeting at Belleville High School, the three teenage friends bonded while listening to an eclectic mix of music – a diverse playlist which included  Kraftwerk, Parliament, Prince, and the B-52s.

The electronic and funk sounds that influenced the Belleville Three came primarily from a late-night radio show called The Midnight Funk Association, broadcast in Detroit by DJ Charles ‘The Electrifying Mojo’ Johnson on WGPR

Juan Atkins was inspired to buy a synthesizer after hearing Parliament.  Atkins was also the first in the group to take up turntables, teaching May and Saunderson how to DJ.

Intrigued by Chicago house music, the trio began to formulate the synthesis of this dance music with the mechanical sounds of groups like Kraftwerk, in a way that reflected post-industrialist Detroit (the city formerly referred to as Motor City due to its once burgeoning automotive industry and the birthplace of Motown), into the form that became known as Detroit techno.

Pioneering club The Music Institute at 1315 Broadway in Detroit was the trio’s laboratory of ideas, where May, Atkins, and Saunderson DJed, formulating their sound with fellow pioneers like Eddie ‘Flashin’ Fowlkes and Blake Baxter.

All three were defiant non-conformists, musical rebels who were focused on providing the soundtrack to an alternative future, where the people reclaimed technology for the benefit of the community.

“When people start doing what other people want them to do, they become completely programmed. We refused to be a part of that game,” Derrick May said of this formative time in their lives.

When their careers took off in the early ’80s, the three went their separate ways launching their own labels and hugely successful careers; their legacy in electronic dance music stretching across four decades and still continuing to this day.

In a little corner of Wales – Bethesda in Gwynedd, to be exact – their influence was keenly felt.

There, musician Geraint Northam, better known under his musical alias ‘Ffrancon’ (Nant Ffrancon being the nearby valley) was inspired by The Belleville Three and their pioneering sounds.

The US trailblazers had a profound influence on this Welshman and his music.

“They and others in Detroit techno – Kenny Larkin, Jeff Mills, Underground Resistance, Drexciya to name a few – have had a huge influence on what I do,” he says.

“Back in the early 90s I used to go to a club in Edinburgh called Pure, which was one of the first places in Europe to put on these artists.

“There was a depth and soul to the music that went beyond just getting out of your head and dancing until 4am. As I’ve gotten older the music has stayed with me and has become a bigger and bigger influence.”

Making music for the past 20 years as ‘Ffrancon’, he is himself something of a creative free thinker, taking the spirit of techno’s non-conformity and applying it to his own musical ideology.

“From 2002-2008 I ran an imaginary record label called High Quality Recordings/Recordiau Safon Uchel – there were lots of different artists on the label and they were all me,” he laughs.

“Gradually people started treating it as a proper record label and I ended up doing four sessions for Radio 1 and was one of their DIY record labels of the week. Huw Stephens has been a huge supporter of what I do over the years – diolch Huw. Since then I’ve continued to plough an interesting, weird and sometimes lonely furrow of electronic music.”

His latest creation could arguably be his most important and most personal. 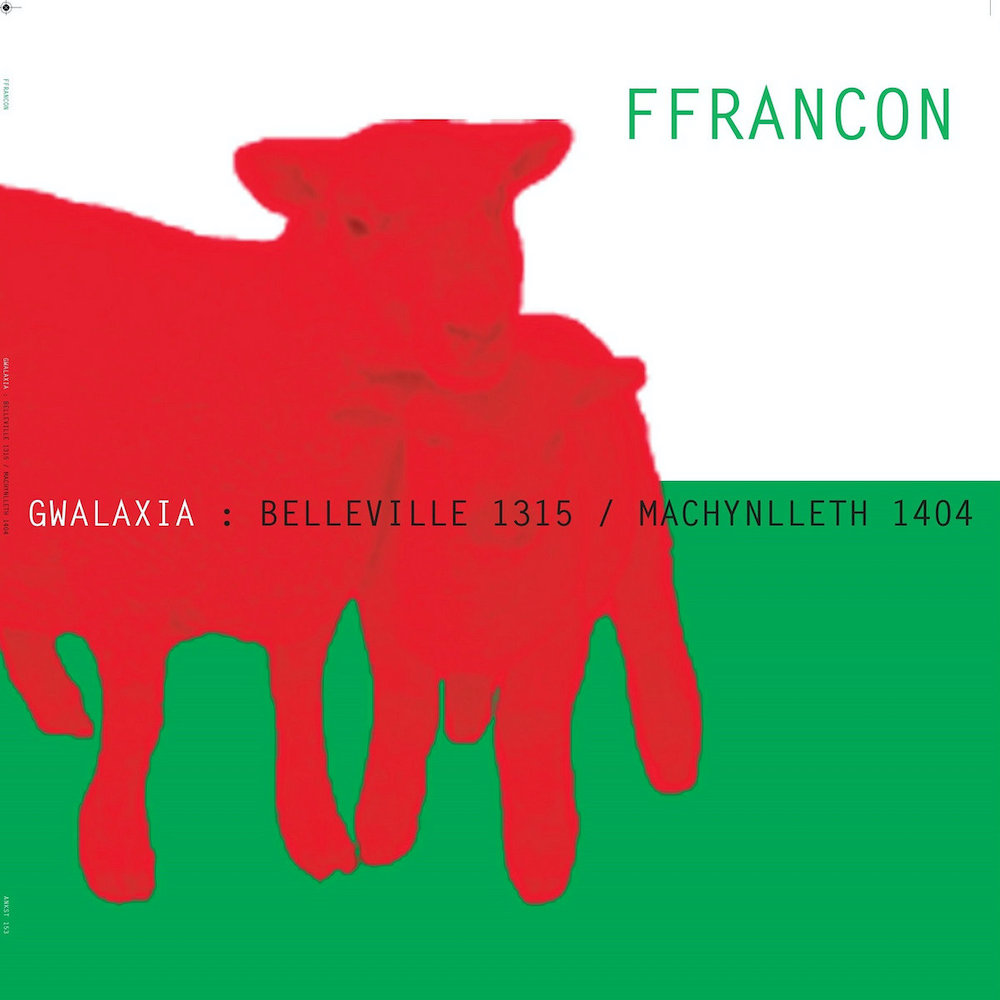 It’s an album that channels the rebellious and creative spirit of Belleville and Machynlleth through the medium of electronic music, resulting from Geraint’s amazement at learning of the unlikely twinning between the two towns.

“A few years ago I made the startling discovery that Belleville, Michigan, the birthplace of techno, was twinned with the mid-Wales market town of Machynlleth,” he says. “As a huge fan of Detroit techno I felt a strong artistic urge to connect the two together musically, and self-released an album under the name ‘Machynlleth Sound Machine’ in 2019.

“Emyr from the Ankst record label fell in love with it, and wanted to give it a proper physical release on vinyl and CD with all the bells and whistles. We worked together on changing a few things, while keeping the spirit of the original release intact.”

He jokes when he says he ‘nearly fell off his chair’ when he learned of the connection between the two places.

“I was idly Googling something to do with Detroit techno, as you do, and came across it on Wikipedia,” he recalls. “I nearly fell off my chair. And then I thought ‘I’ve got to do something with this.’ As a producer of instrumental music, concepts and ideas have always been important to me – it gives the music an extra dimension.”

Digging a little deeper as the idea for his latest project grew, he discovered more about how Belleville and Machynlleth came to be united across the Atlantic – and gained a thorough insight into the history of twinning

“After the Second World War a lot of places around the world ended up twinning together,” says Geraint. “Economies were trying to rebuild and it was thought that twinning gave more opportunities for creating international economic links, as well as encouraging tourism.

“As to why Belleville and Machynlleth in particular – I think it was fairly random. A friend of mine’s mum, who works for the local council, recently came across some documents that said that Dolgellau had turned down the opportunity to twin with Belleville in the 1960s, and it was then passed on to Machynlleth who said yes!”

The album title’s ‘Gwalaxia – Belleville 1315 – Machynlleth 1404’ is loaded with meaning related to both the twinning and the album’s wider concept – both earthly and beyond the stars.

“‘Gwalaxia’ I really liked as a word that describes Wales/Gwalia, combined with the galaxy – there’s a strong reference to Detroit techno mythology and Afrofuturism in there,” says Geraint.

To add to this improbable tale, it appears that the word was actually invented by the Welsh middle-of-the-road singer Bryn Fôn on an early ’80s prog concept album.

Released in 1981 it is an album of prog rock, and instrumentals with the exception of the Bryn Fôn composed and sung track, which also has famed Welsh musician Pino Palladino playing bass guitar.

As for the dates in the title of Ffrancon’s latest opus – ‘1404’ of course refers to the year of Glwyndwr’s rebel Welsh parliament in Machynlleth, while 1315 references the address of pioneering techno club The Music Institute at 1315 Broadway in Detroit.

The musician and producer says the broader meaning behind the album is ultimately connections between people, wherever they may be situated.

“It’s about making connections across the world, receiving influences, combining those influences with what’s around you, and passing it on,” he says.

“So I’m taking techno music and combining it with my Welsh rural upbringing, history, weather etc, and then passing it on to whoever wants to listen and maybe take up the baton.

“That’s why the opening track is called ‘Detroit Chicago New York Machynlleth’. It’s tongue in cheek but also totally serious. And the final track on the CD reverses this and sends the music back from Machynlleth to Detroit, or Miami, or Tripoli, or wherever.

“And of course there’s a deeper political message in there about people from different places and cultures and backgrounds having a conversation, understanding each other, and getting on, which is incredibly important at the moment in the increasingly intolerant and scary world which we’re living in.”

Geraint is also passionate about imparting the story of the genesis of techno and the struggle at its heart.

“It’s important to note that almost all the original Detroit techno producers were black,” he says. “As the Black Lives Matter movement has recently taught us, growing up somewhere like Detroit with a different skin colour would have meant these people didn’t have the same privileges that white people had.

“In many ways techno was a product of these circumstances – the music was/is futuristic and a lot of the artist names, track titles, and art referenced otherworldly things like other galaxies and planets.

“Some of the artists were trying to escape from their difficult circumstance, by creating a new world. A lot of this was very political – for example the band Drecxiya developed a nautical afrofuturist myth whereby Drexciya was an underwater country populated by the unborn children of pregnant African women who were thrown off slave ships.”

It would be lovely to think that in the spirit of connection (and twinning), the Belleville Three would get to hear Geraint’s album, and a celebration could be created, one which would see techno artists participate in some sort of transatlantic exchange programme.

It is something the musician has considered.

“I’ve thought about doing this but haven’t yet,” he says. “If anyone reading this has contacts, please let me know.

“I’d love to get some Detroit techno artists over to play at the Centre for Alternative Techno in Machynlleth!”

I always thought Germany was the birthplace of Techno. They had a progressive music scene in the 70s that the British media dubbed ‘Krautrock’ which included bands like Kraftwerk and Tangerine Dream who were very much ahead of their time and hugely influencial on the dance music scene over the last 45 years or so.

Nice to see my old mate Daf get a mention…