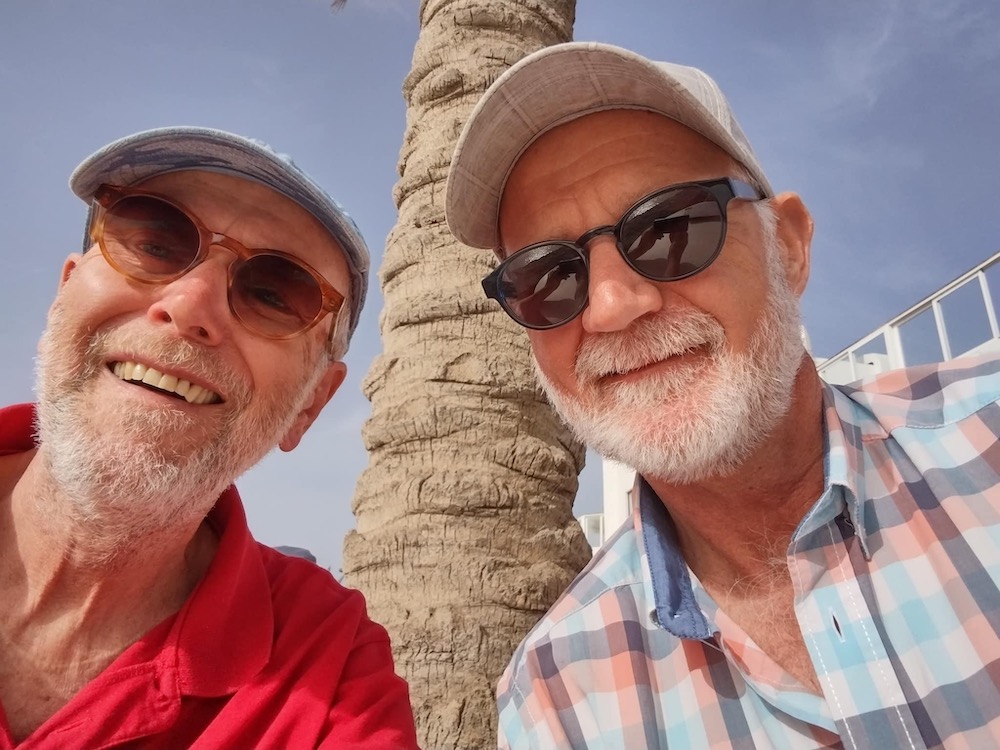 John Sam Jones reflects on a personal year of writing and the other things in life.

January and February: The Canary Islands – Tenerife, La Gomera and Gran Canaria… it wasn’t a seven-week holiday – we just went to live somewhere warm for the winter. We hiked (La Gomera), we partied (Gran Canaria), and we did some sight-seeing (Tenerife)… and we caught Covid – but very mildly! My publisher emails to reject my novel.

March: We recover and try to get back to ‘normal life’ in Effeld – but Russia’s invasion of Ukraine – and the flood of refugees – and the talk of a major European escalation… and we’re left wondering if Putin is about to vaporize us.

We decide to live with calm elegance – and Jupp reads his way through the early days and John knits the most complicated Aran sweater he’s ever attempted – distractions from the horror. By the end of the month Jupp has refugees from Ukraine in his Integration Classes. 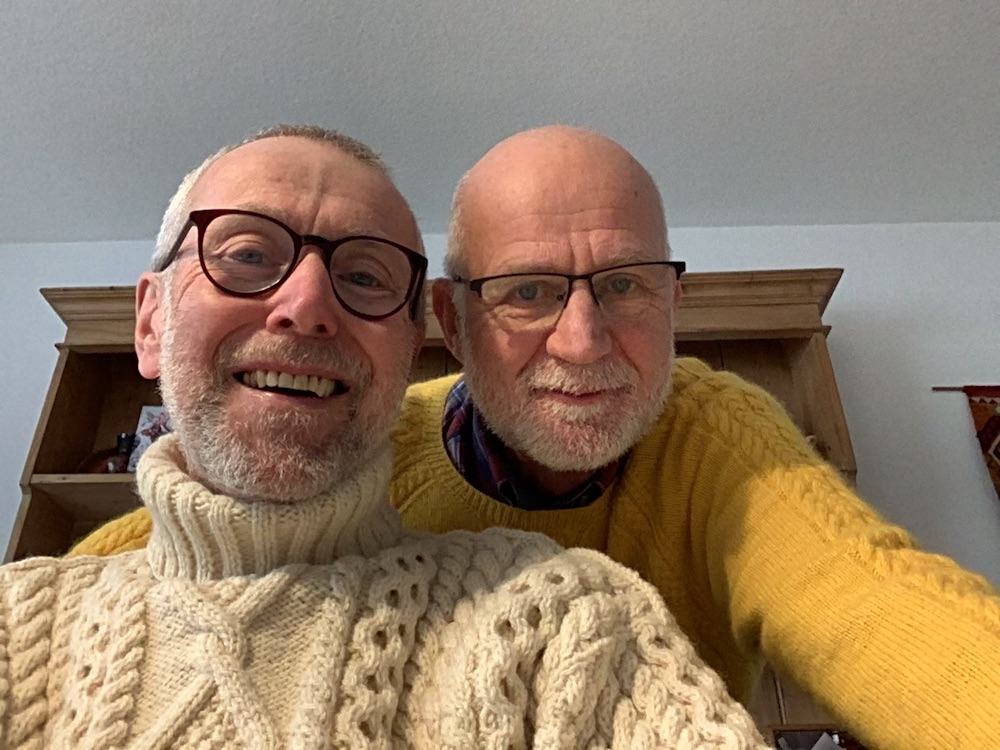 April: The war in a neighbouring country soon becomes part of our ‘normality’ – what an awful reality to acknowledge! We spend a few days in Groningen – one of the northern cities of the Netherlands – and a gem. Occasionally we reflect about ‘being on holiday’ when there’s a war on!

May: John turns 66 and receives his state pension from the UK – a part of which includes ‘free’ healthcare – so the NHS Business Authority confirm that the UK will pay his health insurance in Germany. We travel to Wales with two friends from Effeld – a week in Barmouth… time to catch up with friends and family, re-visit old haunts, and see the familiar through Alex and Claudia’s eyes.

June: John is re-called for a blood test after his PSA showed a slight rise at the annual urology check-up (just before Christmas 2021)… and now the rise is significant and a biopsy is scheduled. We spend a few days in Brussels – if Putin is going to kill us all we might as well cross the items off the bucket list. We reflect again about ‘being on holiday’ when there’s a war on!

July: The biopsy won’t be until mid-August, so we make an effort to enjoy the summer weather… lunch and dinner outside most days – the lavender scent heady, the geraniums a beautiful show this year.! And we spend a few days in Mainz and Wiesbaden… reflecting again about ‘being on holiday’ when there’s a war on.

John receives notification that his memoir, The Journey is Home – published in 2021 – is on the Wales Book of the Year shortlist… and at the end of the month we hear that he’s won the Creative Non-fiction category… but fail to get to Wales because Lufthansa goes on strike! 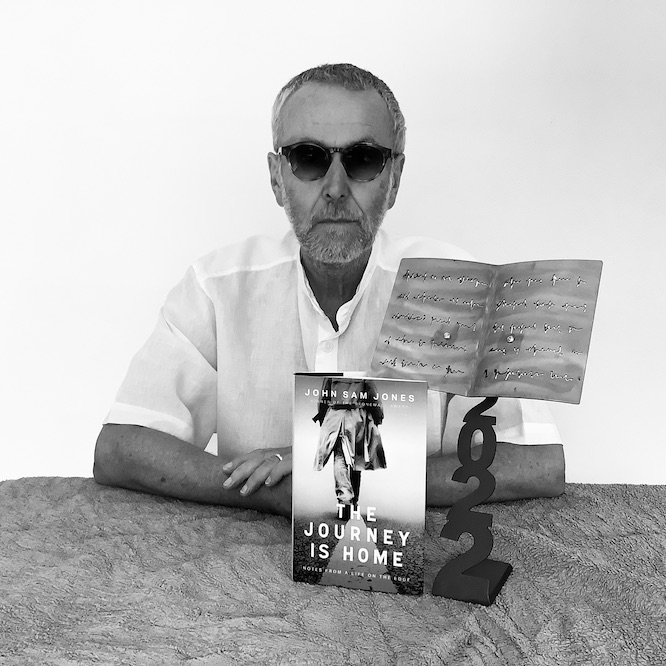 August: Planned readings of the now award-winning book with Awen Meirion at the National Eisteddfod in Tregaron are scrapped because we can’t re-schedule flights… so winning the ‘book of the year’ falls a bit flat. The trophy arrives from Wales. John has to pay 45 euros to release it from the German post office customs.

John and Isabel (from Leeds) cheer us up with an overnight visit and a re-supply of Yorkshire Tea and thick-cut marmalade! The biopsy is uncomfortable – even painful – but the day after we have a lovely day in Cologne with Derek, Gill and Joy (from Cheshire)… but later in the day John develops fever – and clearly the biopsy has caused an infection: he spends four nights in hospital on IV antibiotics!

And then the biopsy results come through… prostate cancer… and all suggestions of an autumn book tour in Wales are abandoned.

We go to Berlin… distracting behaviour! 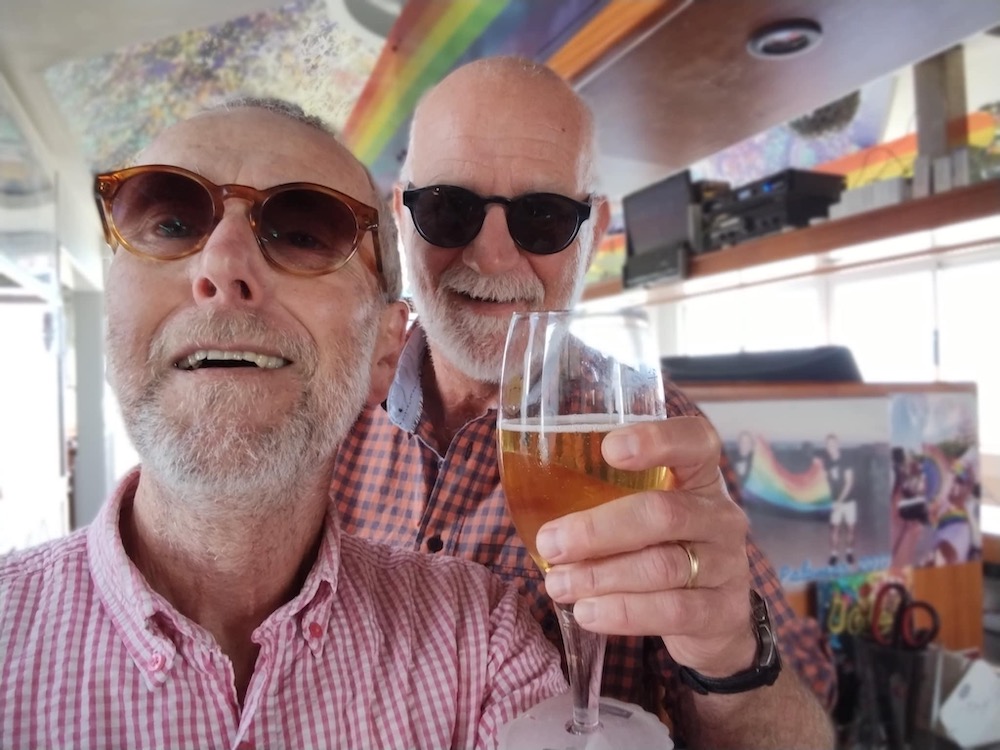 September: In Berlin we ‘wine and dine’, we go to the theatre, we go to gay bars and clubs – and we spend some time with Stefania and John (from Manchester) who are visiting the big, bad city… and we reflect anew about ‘being on holiday’ when there’s a war on!

Then the Queen dies and German TV goes ‘over-the-top’… Jupp watches the coverage more than John!

The local Urologist suggests surgery to remove John’s prostate (because of his father’s history with aggressive prostate cancer)… she refers John to a surgeon in Essen who has a robot called da Vinci.

And then some more distraction – a two-week holiday booked months previously – a grand tour by train to the Italian Lakes stopping off in Strasburg for three nights on the way and three nights in Freiburg on the way back.

Hiking around Lake Orta is beautiful – and we have deep discussions – fuelled by Grappa – about ‘being on holiday’ when there’s a war on! 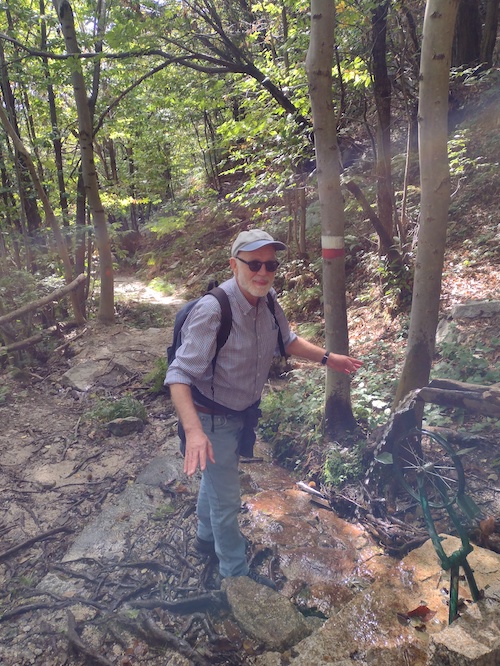 October: On our return from Italy we meet with Dr Davoudi and talk about robot assisted key-hole surgery – and a date is set in mid-November for John to ‘dance with da Vinci’.

The weather remains balmy – Golden October… we walk a lot – in the forest, by the lake – and still eat lunch outside – the geraniums now complete with the dahlias! 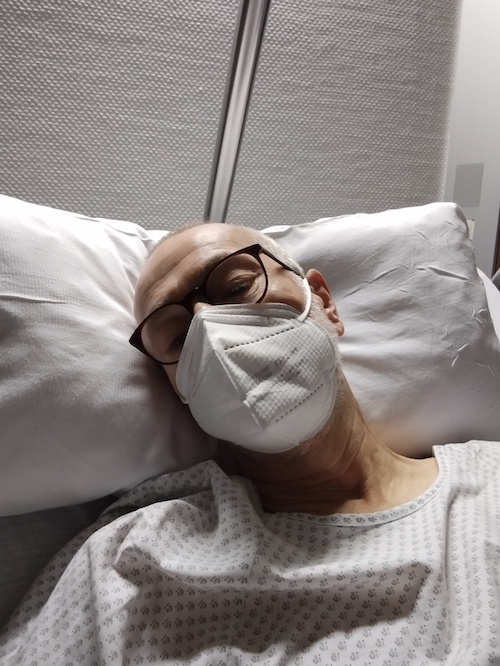 November: Reading… watching TV… John knits a lot: distraction. The surgery is complicated by a lot of internal bleeding – but the surgeon is confident with Jupp on the phone that all has gone well.

John’s recovery is remarkable – no pain… but as the weather turns cold, re-learning bladder control is a challenge. The histology report is all we could have hoped for: the cancer was contained within the gland and the gland was removed.

John thinks he looks sexy in Pampers – but actually he looks ridiculous! John gets a call from the BBC. They want to commission a story for broadcast on Radio 4.

December: We celebrate 36 years together – and in the context of this past year’s narrative it has taken on significance beyond the hard work of relationship: this love (the one that for centuries ‘dared not speak its name’) has nurtured and sustained us – and brought great joy… and we’re both humbled, grateful and privileged to share it.

All the best John and Jubb…

Y A has produced a number of authors over the years John, you I value the most…