‘Like being given a gift’: Author Glen James Brown reacts to securing a Writers in Residence Award at Gladstone’s Library 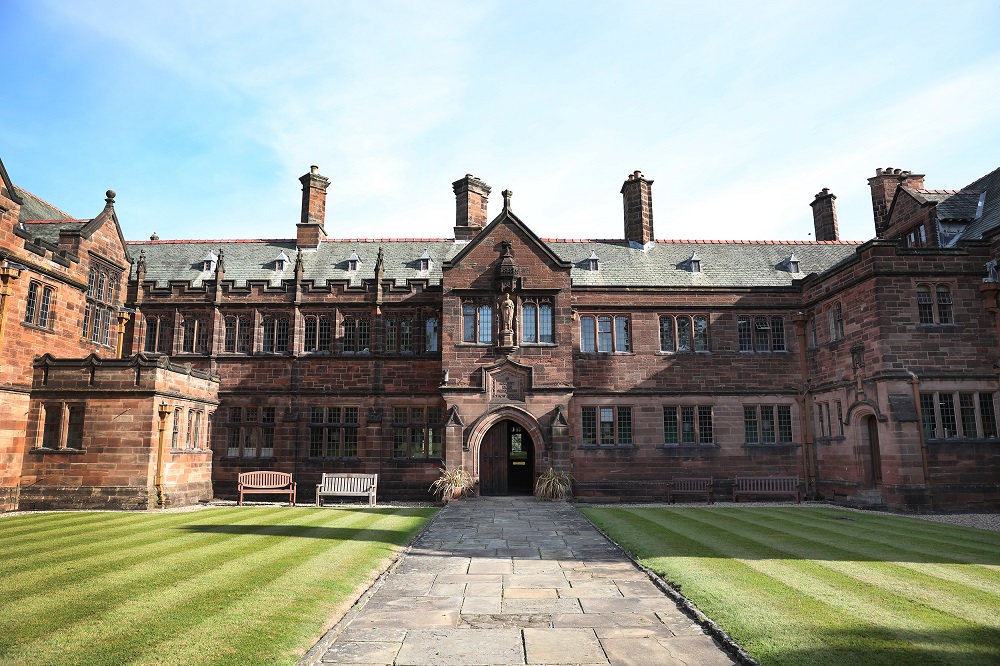 ‘Be happy with what you have and are, be generous with both, and you won’t have to hunt for happiness.’ – William Ewart Gladstone

Writer Glen James Brown has described being offered a writer’s residency at Gladstone’s Library as “a gift” as he works on the follow up to his critically acclaimed debut novel Ironopolis.

Published to widespread critical acclaim in 2018, Ironopolis was shortlisted for both the Orwell Prize for political fiction in 2019 and the Portico Prize in 2020 for books that evoke the spirit of the North of England.

Discussing the residency at the library in Hawarden in Flintshire with Ela Griffiths, he said: “The work you produce is, to an extent, a product of your surroundings and the various constraints in your life—some of them can provide focus, but many are distracting. Gladstone’s Library is a place built around creativity and thought, a space beyond the usual limitations of time and energy. In this way, the work I do there will be a product of that unique environment. Being offered the residency is like being given a gift, and I’m looking forward to discovering what it is.”

“The work you produce is, to an extent, a product of your surroundings and the various constraints in your life—some of them can provide focus, but many are distracting. Gladstone’s Library is a place built around creativity and thought, a space beyond the usual limitations of time and energy. In this way, the work I do there will be a product of that unique environment. Being offered the residency is like being given a gift, and I’m looking forward to discovering what it is.”

Firstly, a big congratulations on achieving the residency. Could you tell us a bit about what you hope to do when you’re at Gladstone?

Working on the book I’ve been writing for three years. It’s getting close to being done but has taken a lot of twists and turns and dead ends. I’ve learned a lot about what to do and not do when writing a novel, and I’m now approaching the end game. The residency is going to offer me a little island of calm where I can focus on getting it as good as I possibly can, and I’m really looking forward to it.

A bonus is Gladstone’s is surrounded by beautiful nature. I really like bird watching, so I’ll be taking a lot of walks and seeing what I can see.

Have you got any advice for writers starting on their first novel?

Everyone will respond differently here—what advice works for me might not work for you, and the trick is to figure out how you write best and develop a practice around that. For example: do you prefer to plan out your story before you start? Or just dive in without knowing how it’s going to turn out? Are you the sort of writer who polishes each page before moving onto the next? Or do you pour out the words and then return later with a machete to start hacking away at them? No one method is more legitimate than another.

But on saying that, there is one universal rule. Don’t give up. By this, I don’t mean keep plugging away at a story which is dead in your mind and just isn’t working—you’re probably right to drop that. What I mean is, if your imagination is fired up by an idea, but life is busy and you have a lot of other responsibilities, just try to keep writing however you can. Tapping it into your phone on the commute and lunch breaks. Write for half an hour before bed.

It’s hard—our society continues to put less and less stock in the arts, and unless you’re lucky enough to be rich and don’t need to work a day job, then the time and energy you have to be creative is going to be limited. But do everything you can to keep the story alive in your mind and carve out a little space in your schedule and psyche to commit it to paper.

Also, don’t get disheartened when you hit problems in your story. It will always happen, trust in yourself to eventually figure things out—I do my best problem-solving when I’m washing the dishes or something—and know it won’t be perfect on your first pass.

There’s that famous Hemmingway quote the first draft of anything is shit. He was right about that, so try to keep in mind that you’re probably still closer to the start than the end, even after you’ve typed ‘The End.’

What have libraries meant to you as a reader?

Well, the other universal rule is that in order to be a good writer, you have to read as much as you can. It’s the fuel your imagination needs, as well as being your first and best writing teacher.

As a kid, I still remember my local one. The smell of the place, and that giddy hush as I walked through the doors. It’s where I first got hooked on reading and stories, and that carried on into my teenage years where I started writing my own (terrible) stuff…and I just didn’t stop writing. In that respect, my childhood library has led me to being resident at Gladstone’s library.

Libraries are factories producing the next generations of writers, but they are also lifelines for adults who use them as a means of education and resources. They’re also havens of peace and quiet for people who need to escape their home lives for an hour. It’s tragic that they’re being closed all over the place. We have to do everything we can to save them.

Gladstone’s Library was founded by former Prime Minister William Gladstone, who was eager to make his personal library accessible to others and endowed the library with £40,000.

Following Gladstone’s death in 1898 a public appeal was launched for funds to establish a permanent building to house the collection and in 1902 the library was officially opened by Earl Spencer as the National Memorial to W.E Gladstone.

Today the library’s priority is to build and nurture a network of writers and thinkers that during their stay at the library will be able to reflect with many social, moral and spiritual questions that encompass Gladstone’s legacy.

‘…nothing short of a triumph’ – The Guardian

Ironopolis follows the intertwined lives of the residents of the fictional Burn Council Estate over five decades as it witnesses the closure of the area’s coal and steel mills and the engulfment of the estate itself by a housing association. Interwoven throughout their secrets and stories is the mythological creature Peg Prowler who hunts the estate for vulnerable her prey.

As part of the residency Glen James Brown will be hosting an event on The Inconvenient Facts of Writing Fiction on Tuesday April 5th at 7pm. This will be able to be attended in-person at the Gladstone Library or accessed online.