A new atlas created to teach Wales’ children about the culture, geography and history of their nation will be launched this month.

Available in Welsh and English, Wales on the Map, Cymru ar y Map has been created by author Elin Meek and artist Valériane Leblond. 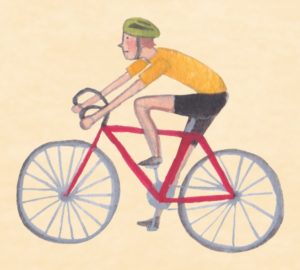 The book will officially launch in the Atom, Carmarthen on November 26 at 10am, but is now available in bookshops.

Valériane Leblond, who moved to Wales from France in 2007, and lives in Llangwyryfon, near Aberystwyth, said she realised that there was a gap for this kind of book for her sons Wyre, Alban and Nebo.

“The idea is to provide children – and grown ups! – with interesting and various facts about the country we live in, like history, geography, architecture, sports, culture, arts, and some odd anecdotes,” she said.

“I have learned a lot of things by doing this book. I actually didn’t know about most of them before starting on the project, as I was brought up in a different country.

“The most interesting fact for me was about the Snowdon Hawkweed, which is one of the rarest plant on earth. It was also quite challenging to draw – as you can guess, there are not many pictures of it!

“For me it was incredible to see that there are interesting facts about most parts of Wales. I really enjoyed painting Anglesey and Carmarthenshire.

“But throughout I learnt a lot about history, especially the industrial past, and how it may have shaped the Wales I know, along with agriculture.” 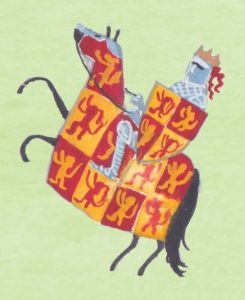 The wealth of mythology and history related to each part of Wales meant that there was plenty that had to leave off the map as well, she says,

“It was hard to cover everything in the book but there were some that were left out deliberately,” she said.

“The question came up in one of the first meetings with the publisher, editor, author, designer and illustrator, about the crowning of Prince Charles at Caernarfon Castle.

“We felt that it wasn’t the most relevant and interesting fact for Caernarfon.

“There are so many castles, talented people, historical facts in Wales that we had to leave aside. Fortunately, that wasn’t my part of the job!”

The book involved creating around 500 individual paintings. They have now all been donated to the National Library in Aberystwyth.

“These pictures are all about Wales, and I thought they would be well looked after, and maybe of some use in the National Library’s collection, rather than getting damp, damaged and forgotten in a drawer at home,” Valériane Leblond said.

“It is also an honour and quite an achievement to have my pictures in their amazing collection.

“I hope Wales on the Map will be of interest for children, parents, librarians and teachers, and help learn about Wales history in and out of the classroom.”

Wales on the Map is published by Rily Publications and costs £12.99.

Enjoying Nation.Cymru? We’re looking for just 600 people to donate £2 a month to sponsor investigative journalism in Wales and hold Wales’ and Westminster’s politicians and institutions to account. Donate now!.