On Being a Writer in Wales: Eluned Gramich

How to be both (Welsh and German)

When I was eleven, my family moved from Carmarthen to Bristol. We lived there for six years before returning to Wales.

It was quite a shock to me, at first – the traffic fumes triggered my asthma, and my accent changed dramatically in a matter of weeks, coming out with ‘lush’ and ‘cheers, drive’ – which my mum thought very funny.

I was completely unpronounceable.

I realised I’d pulled the short straw of nationalities. Half-Welsh, half-German, living in England – what could be worse?

In fact, it’s a debate my classmates often had. I found myself stuck between Germanness and Welshness.

The headache continued beyond the school-gates, too. In Germany, I was not Welsh at all.

My German grandparents called me their ‘Engländerin’ – the English girl – and in my Welsh school, my Germanness that stood out like a split Weisswurst.

I remember fellow eight-year-olds asking me about Hitler before I even knew who he was.

There are these marvellous words – hybridity, multiplicity – used to describe identity. Identity is not just one, unchanging thing.

But in my experience, hybridity is sometimes hard to find. Identity has often been a choice between this or that, especially when writing. I often feel like I have to make a choice – either I’m a Welsh writer or a German one.

Either it’s about Welsh landscape, community, language… or it’s not. How to be both when one seems far removed from the other?

In an interview, the short-story writer Rhys Davies was asked ‘Do you consider yourself an Anglo-Welsh writer?’ and he replied: ‘No. I am only a writer’.

I don’t think it’s possible to be ‘only a writer’, and I suspect Rhys Davies thought that too. (I guess he probably just got impatient with interviewers asking him about his Welshness).

Where you live and grow up, and the language you speak, shapes who you are in countless, indescribable ways.

It also gives you a lot to write about – people, landscape, community, history – and if you come from two places, or more than two, then I think there’s even more material to draw on.

But the ‘material’ is more fragmented and complicated, too, because you risk becoming an interpreter or a tour-guide instead of writing a ‘kick-ass story’ (in Stephen King’s words).

How to explain German history or German culture to readers who may be completely unfamiliar to it?

And how to describe Welsh culture and life?

And do they really go together anyway, or is it too obviously autobiographical?

Anyway, I end up having to choose between them so I can write a better story (at least, I hope so).

I wrote a short story once about a German girl in an English school, all Welshness erased. I wrote another story with a woman who goes to Germany, and no mention of Cymraeg.

I’m very grateful to be both German and Welsh; to speak more than one language, but there is also that hopeless aspect of it – where you feel like you’re always missing a part of yourself, another home.

You navigate the world split into two, yearning for the other country, only to find, when you get there, that you are already missing the place you left. 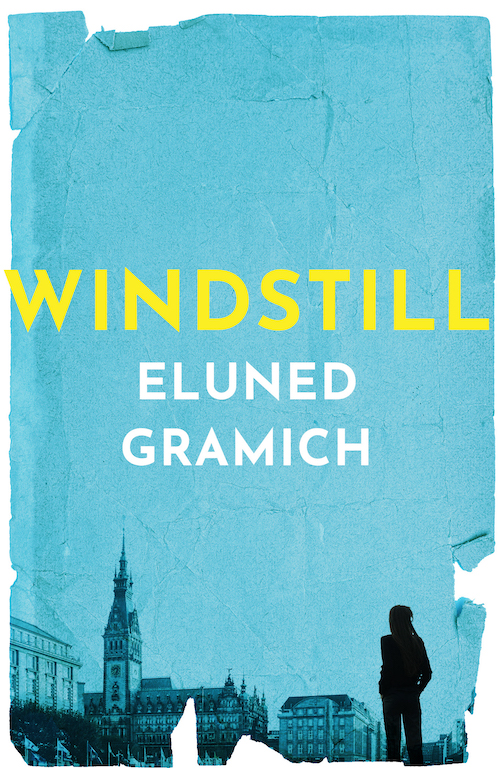 The story in Windstill, my first novel, is set in Hamburg, but the main character, Lora, grew up in Swansea.

She has German family, though, because I feel like – in your first novel – you’re allowed to write freely, express a little of who you are as a writer; try for hybridity instead of having to choose.

Lora’s grandfather has died and she stays with her grandmother, Elfriede, after the funeral. Elfriede is not coping well – she has bad dreams and anxieties and believes there are people wanting to break in and steal whatever it is she has in the safe in the basement.

The novel is set in 2016, but the shadow of the Second World War and the mass displacement that followed (called the Expulsions) still lingers.

Lora doesn’t know what to make of the events of the past and the secrets she discovers. Neither does she knows why her ex-boyfriend keeps turning up, even when she’s told him to leave her alone.

My hope for the novel (apart from being a ‘kick-ass story’) is that it expresses a little of what it feels to be caught between two cultures, two ways of looking at the world.

It’s my attempt to ‘be both’, without any hyphen and without having to choose.

Eluned Gramich’s novel Windstill is published by Honno. It is available from all good bookshops.