Nation.Cymru is delighted to publish the ninth and final part of  our serialisation of documentary maker-turned-novelist John Geraint’s seriously playful “Great Welsh Auntie Novel” along with a reading by the author.

It’s Election Night, February 1974. Seventeen-year-old Jac is trying to get a fix on why he feels stuck in a pattern of life dictated by his early Rhondda childhood.

As an only child, Jac had little idea how to negotiate with other children.

On the rare occasions he didn’t get his own way at home, he had a tactic. Not so much a tactic, because he didn’t feel in control of it.

In fact, he felt overwhelmed by it, overwhelmed with anger and sadness directed at himself as much as anyone.

Sulking was a recognised ploy. His grandparents had a special Welsh word for it: pwdu.

Cutting off his nose to spite his face was what his father called it: he disapproved mightily. Though with the rest of the family, and Mam in particular, it worked.

But if he pwdu-ed with a playmate, they’d simply pick up their ball, literally or metaphorically, and head home to their brothers and sisters. Jac would be left alone, bereft, with nothing to do but go on pouting.

In a group, pouting was even more disastrous.

He would be taunted and teased, mercilessly. And his attachment to telling the truth made it worse. In Sunday School, he’d been taught that God demands honesty from His children. It was a standard Jac’s father adhered to at all times.

‘The truth shall make you free’.

But the truth could trap you too.

One Friday evening, a gang of them had been up the tumps, a patch of rough, grassy knolls at the end of Hughes Street.

It looked down on the Incline, the derelict tramway that – when the Naval Colliery had been working – took the spoil from underground to be dumped as a massive pyramid, the Black Tip, which still loomed over mid-Rhondda from the mountain above.

They’d been talking about toys. Heading home, Belinda Owen made them all promise to bring their favourite toy out to play, first thing next day.

The boys planned to bring Daleks, robots, binoculars; the girls roller skates, skipping elastics, Chatty Cathy. James Taylor had a tank that fired real shells. Belinda, tough as any boy, would turn up with her Action Man.

She asked Jac what he’d bring.

It was several months since he’d got his steering wheel back; no one there knew about it. He could have impressed them all by naming his Corgi gold-coloured James Bond Aston Martin, complete with working ejector seat.

But he couldn’t tell a lie. His favourite was the toy he’d told them he’d grown out of.

They scoffed when he confessed he’d got it back. And worse – much worse – when they met at the tumps next morning, his steering wheel was the only toy in sight.

But everyone had promised!

As Jac began to remonstrate, James Taylor snatched the steering wheel from his grasp and wouldn’t give it back. Not until Jac had paid a forfeit. 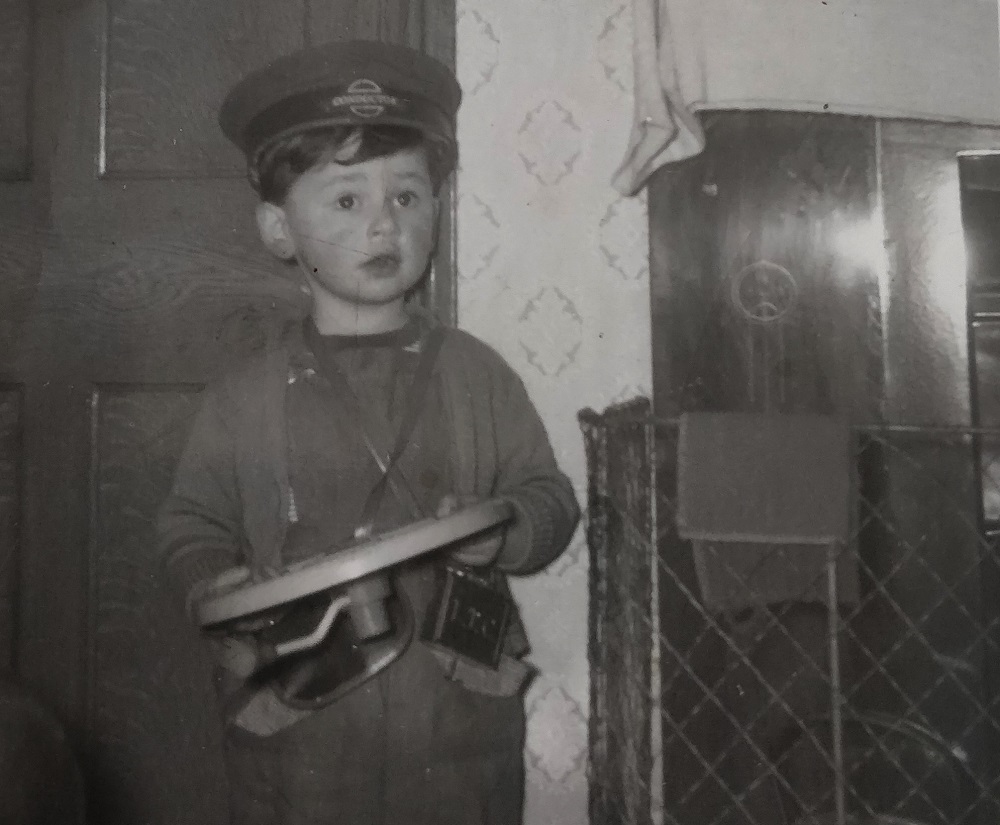 Belinda said he had to name ten pop groups. Why she picked on that, goodness knows.

“Go on, Jac, just name ten. Name five. Then you can have your precious toy back,” jeered James. “Why would I want to keep it?”

They were right: it was the 1960s after all. But pop music didn’t feature in Jac’s house.

There was no record player. No transistors. They didn’t even have one of those Rediffusion boxes that piped in a couple of radio stations together with a relay of TV signals that you couldn’t pick up otherwise because of the mountains.

Their wireless was tuned to the Home Service. Hymns were the only music Jac was familiar with. He wasn’t even sure what counted as pop music. He tried to brazen it out.

“Come on then, Jac, name three,” mocked Belinda. “Everyone in the world can name three. Ena Sharples could name three…”

Who was Ena Sharples? She must go to another school.

“…my goldfish could name three!”

Perhaps Ena Sharples was Belinda’s goldfish. But there was no way out now. He had to begin.

The Beatles. A good start. But that was all. Nothing else came. The laughter began.

Was that a trick, a way of making him look even more stupid? Was Dave Clark a friend of Ena Sharples?

But Jac wasn’t. No bit of him was glad. In fact, he was nearly crying.

He gave up, and told James Taylor, as forcefully as he dared, to give the steering wheel back anyway. It was his. His property.

Taylor poked his tongue out, said the wheel was now forfeit and threw it to Belinda.

When Jac approached her, she tossed it back to Taylor. Jac became piggy-in-the-middle, trying – failing – to catch his beloved toy as it whizzed past him from one tormentor to the other.

Nonchalantly, Belinda yawned to let him know that she’d had enough too. Then, she simply turned and hurled the toy away with all her strength. Which was considerable. And the wheel was surprisingly aerodynamic.

It soared across the tumps, a sky-blue whirr, up and over the edge of the banking, hovering there, before plunging way, way down towards the rusted metal cables of the Incline, disappearing as it landed short of the tramway, in the middle of the biggest patch of stingies in the whole of mid-Rhondda.

Jac spent the next half-hour in there, fruitlessly searching.

The others cat-called down as he stumbled blindly about.

By the time he pulled himself out, empty-handed, the red nettle-rash, hot on his skin, had covered every inch of his legs below his shorts and both his forearms up to the sleeves of his tee-shirt.

Feeling more than sorry for himself, he tried to reason Belinda into an apology.

Without hesitation or warning, she walked straight up to him and punched him right in the guts. He doubled up in agony, and staggered home.

That night under his blankets, after Mam had dabbed calamine lotion over the stings for a second time, Jac played out the scene in his head yet again, tears pricking his eyes once more.

If only they’d asked him something else, some other catalogue of names, it would have been ‘pappish’. No bother at all. Chapels perhaps. Or better, streets – even in his distress, he realised it would be shameful to betray that he knew the names of ten chapels.

Streets would have been alright; he could have done twenty.

Beyond that, what? Greenfield Street and Field Street – or were they one and the same, like you could shorten Tonypandy Square to Pandy Square though it was just the one place?

Was there a Balaclava Row up towards Craig-yr-Eos?

There couldn’t be! Who’d name a street after a hat?

Gilfach Road, that was easy; you could have it twice, an allowable doubler, one in Penygraig, one in Tonypandy, both heading directly up the mountain towards Gilfach, not that any bus could drive up them to get there.

Llwynypia Road, on the other hand, certainly led to Llwynypia.

But Trealaw Road was already in Trealaw, surely?

It was all so confusing.

Where was the Pymmer? Was it a street? How did you even spell it?

Small as he was, Jac understood something there in bed: why he’d embarked on this listing of streets. His skin was itchy and sore. He’d been humiliated by his ignorance of modern music. He’d lost a fight to a girl, something no boy he knew had ever, ever done.

Worst of all, his precious steering wheel was gone forever.

But he was distracting himself. And then he realised that that’s what he was doing, and the pain came back.

And perhaps there is a God after all. Perhaps He does answer prayer. Or maybe it’s just that a seemingly cold, uncaring universe looks after its children in some beneficent way we’re not equipped to understand.

Or it could have been mere coincidence.

Whatever the explanation, and although it didn’t happen straightaway, Jac came in retrospect to credit his desperate plea that dark night for the fact that, eventually, in a way that nobody could have anticipated, and few would believe, someone did come to help him.

That’s the last of exclusive extracts from The Great Welsh Auntie Novel by John Geraint, published by Cambria Books. But if you’d like to discover what happens to Jac and his friends, and who it is that comes to his rescue – who knows, the clue may be in the title!

The Great Welsh Auntie Novel by John Geraint is published by Cambria Books and you can buy a copy here or in good bookshops.

You can catch up on previous extracts here.