Photographs taken at the infamous Sex Pistols’ gig in Caerphilly went up for auction today and ended up selling for twice their estimated value.

The 22 original photo negatives, depict the Sex Pistols and support acts The Clash and Johnny Thunders on stage, as well as images of the crowd during the Caerphilly date on the ill-fated Anarchy In The UK tour. 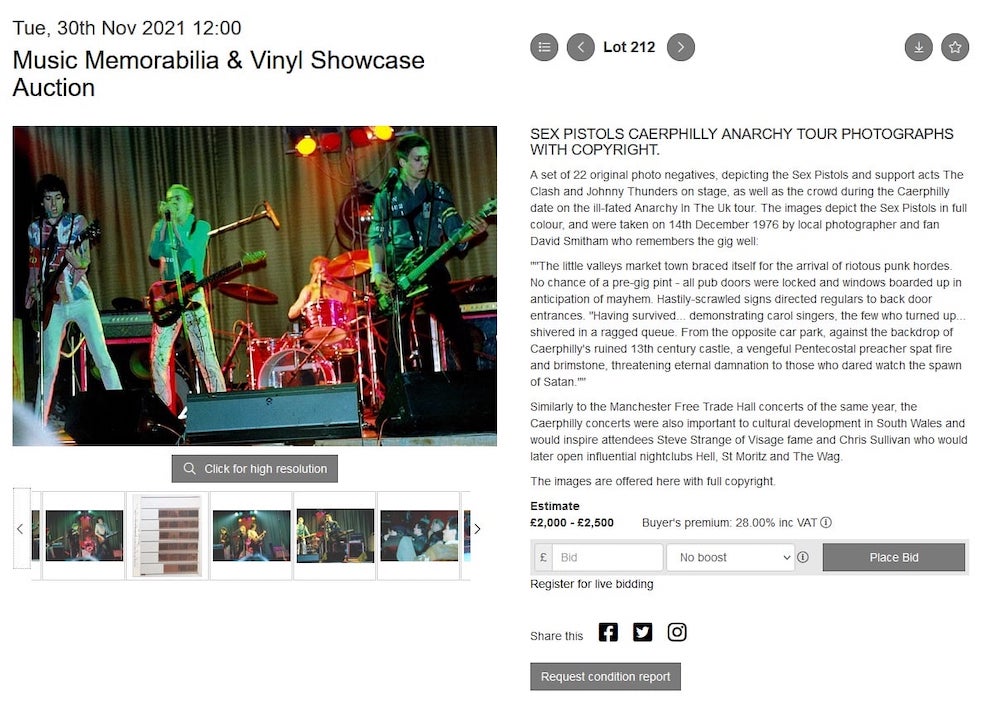 Photographer Dave Smitham said: “I was nervous inevitably to start off with, but delighted as bids passed £3,000 – and then it was a bit of a nail-biter towards the end wondering how far they could go?

“There seemed to be a bit of a competition between two bidders – from the way the bidding was going. I’d love to know the new owner, but I’m happy to see they fetched a decent price though – not for me personally, but to reflect their historical and cultural value.

“I’ve no idea what to do with the money – as yet. I’ll think about something appropriate in the New Year.”

The Caerphilly gig has now passed into the annals of punk folklore for the protests that took place outside The Castle Cinema on Tuesday, December 14, 1976.

Religious protesters thronged the gig, outraged that this ‘vile group who intended to corrupt their children’ were playing in their town.

It was the perfect preparation for the firestorm that was to follow the punk legends around.

Local church leaders and councillors queued up opposite the venue to condemn the Pistols as morally corrupt and a terrible influence on the youth of the day.

While churchgoers sang hymns and Christmas carols a crowd drawn by curiosity rather than anarchy trudged into the gig.

“It was so small and silly, singing hymns and hoping God would strike us dead. It was ridiculous,” Pistols frontman Jonny Rotten would comment. “There were barely 200 people in the hall. There were 500 outside singing Hosanna in the Highest.”

The Sex Pistols were playing the town as part of the infamous Anarchy In The UK tour alongside The Clash and Johnny Thunders and the Heartbreakers.

Less than half of the planned 20 dates went ahead as the Pistols were banned from so many venues.

“It was a good precursor though to when we first came to America,” Rotten said. “The Texans, when they religiously demonstrate against you, they’re doing it with guns.

“So when I remember that I look back fondly at Caerphilly. Caerphilly was silly.”

Johnny. rotten should have done a Caerphilly cheese advert as a follow up to the butter advertising he did many years later. ‘Caerphilly cheese so silly but tastey’. I was 10 at the time. It all seems a bit cabaret and pantomime all these years later, but it did set the scene for years to come and right up to the present.