A pioneering festival for Pembrokeshire promises an eclectic mix of the art, music and conversation as ‘Ar Ymyl y Tir/On Land’s Edge’ returns to the Fishguard area next weekend.

The festival, which drew appreciative audiences to all manner of arts events in its inaugural year, celebrates the unique culture of North Pembrokeshire, its history, landscape, and the spirit of endeavour that has forged connections to the rest of the world.

This year’s celebration spans the 22nd to the 25th September with events all over the town and its hinterland.

Among this year’s highlights is a reading by the new National Poet of Wales Hanan Issa and a specially commissioned piece of music by composer Jobina Tinnemans, to be performed by the Goodwick Brass Band on one of the breakwaters at Fishguard harbour. 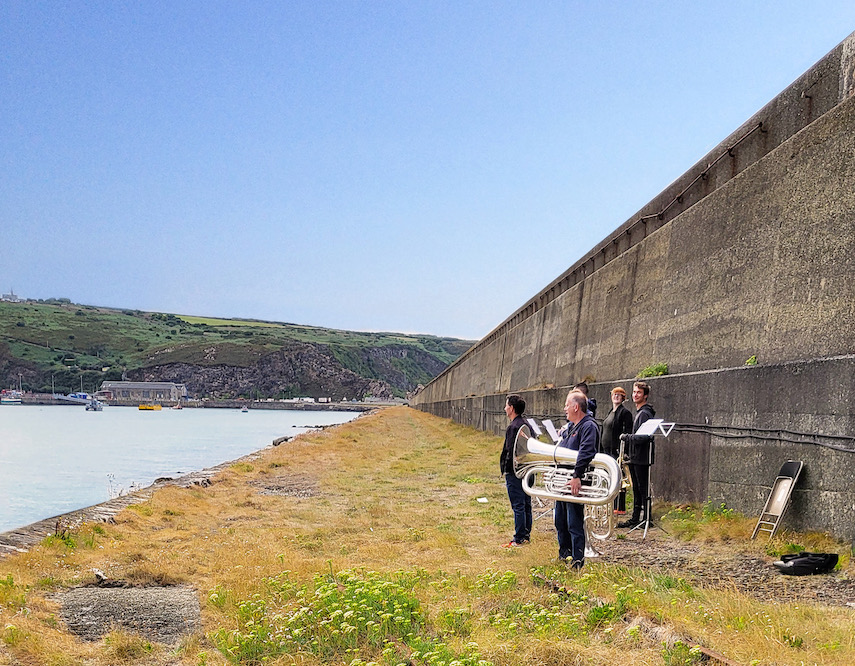 The Friday night sees the premiere of Anne Garside’s adaptation of local author Dewi Rhys-Jones’ wildly ambitious novel The Coracle and the Cathedral.

The resulting play, Coracles and Crime with Clogs On has a dramatic plot in which a gang of pirate canoeists have stolen the Landsker Line, the line which separates north from south Pembrokeshire.

Charged with solving this dastardly crime is The Sergeant, an indolent policeman in charge of a Metaverse Coracle crewed by The Parrot.

Dramatist Anne Garside said: ‘Coracles and Crime with Clogs On does for Pembrokeshire what James Joyce did for Dublin in Ulysses, with more than a touch of Alice in Wonderland, proving there’s much more to the place than just sunsets.

In this play a coracle crewed by The Parrot whirls you in every direction – except the one you want to go. The humour is strongly local, but Coracles and Crime with Clogs On explores the nature of time, the hallucinatory quality of romantic love, and the magic of Pembrokeshire landscapes.’

There’s another new play in the shape of Derek Webb’s Breathing Hope which asks the tantalising question – could the skull of a 6th century Welsh saint cure Covid?

This is based on a belief dating from Victorian times when people travelled from all over Wales to the tiny hamlet of Llandilo, near Maenclochog, to drink water from St Teilo’s Well in the hope of being cured of TB and other respiratory diseases – but only if the water was drunk from the ancient skull of St Teilo.

Holy wells, which are such a distinctive presence in the landscape hereabouts, are very much in evidence this year with Dan and Jo Messore showcasing their Irish Sea-spanning concept album Voices of the Wells and local author Diana Powell sharing her enthusiasm for these sacred sites which have inspired some of her recent short stories.

There’s storytelling in quite another form when Deb Winter teams up with composer Gill Stevens, who’ll be playing the viola da gamba as they mix the subjects of climate change and creation myths in an improvised performance.

He will not only talking about his book but cooking a Goan golden fish curry for the audience into the bargain. He’ll be joined by fellow novelist Hammad Rind who’ll hopefully be supplying some dessert.

There’ll also be a chance to listen to the accomplished Welsh language writer Geraint Lewis, who will be returning to Fishguard to discuss his latest book, Lloerig.

Meanwhile a brand-new book about 10 Welsh women artists called HON Artistiaid Benywaidd yng Nghymru / Women Artists in Wales, edited by local artist Christine Kinsey and published by the H’mm Foundation will be launched on the Saturday.

David Pepper, the artistic director of the festival said: ‘We want the audience to go on a creative journey, using a range of outdoor and indoor venues the audience can explore this area in a new way. Experiencing anything from Brass on the Breakwater to Virtual reality at Tregwynt.’

David has not only devised this year’s festival but has, together with sound artist Molly Macleod created a sound installation in the grounds of Tregwynt mansion. 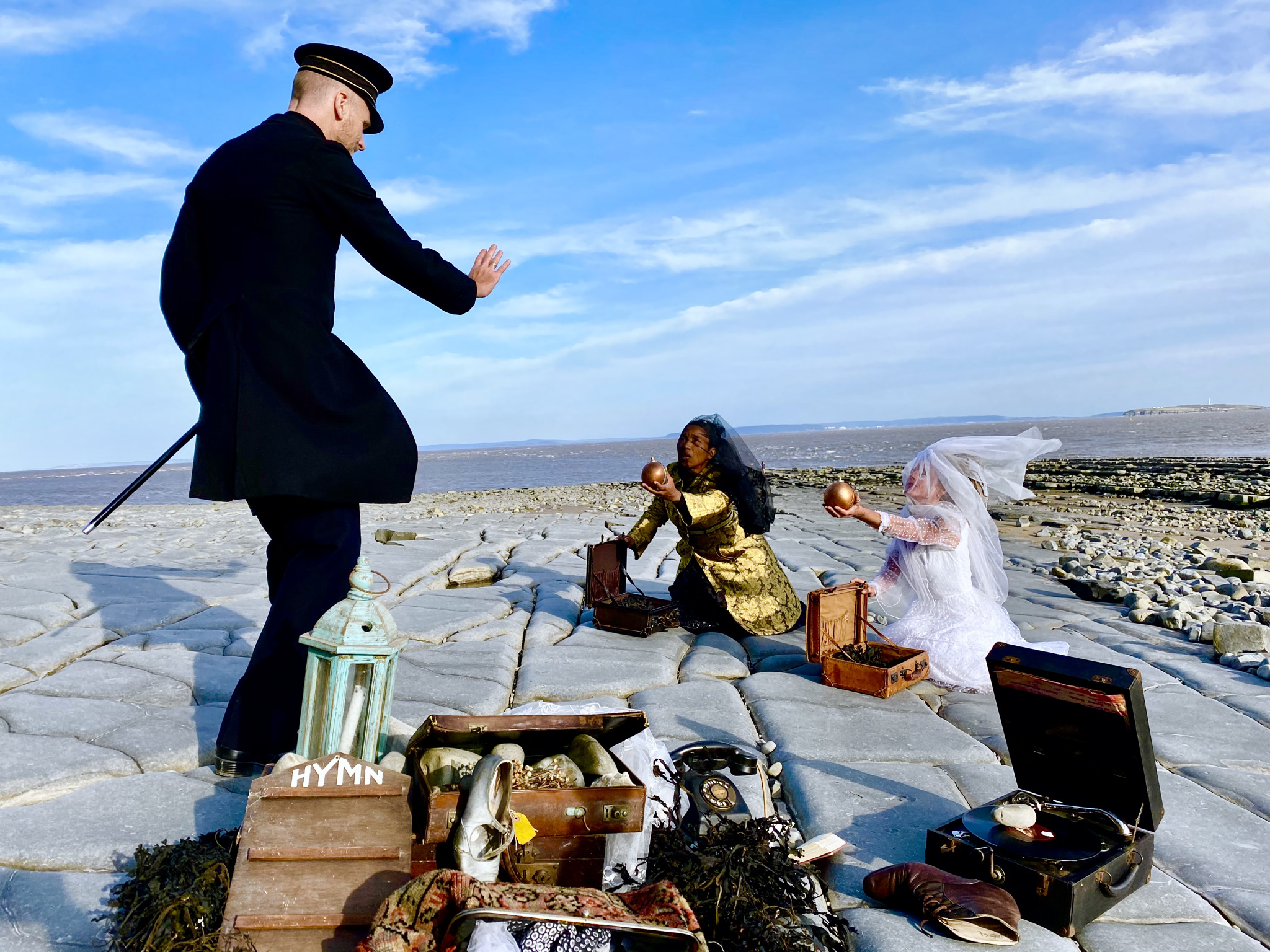 Meanwhile, in the ballroom of the building, festival-goers will get a rare opportunity to experience a new Virtual Reality film, A Frequency At Lavernock/Amledd Yn Larnog, by Tracy Spottiswoode who will be attending in person to introduce her work.

A Frequency at Lavernock is a 360 virtual reality experience, in Welsh and English from award-winning filmmaker Tracy Spottiswoode, together with sound artist Marie Tueje and performers Marega Palser, Mary-Anne Roberts and Gareth Clark.

On May 13 1897, Italian inventor Gugliemo Marconi, working with Cardiff Post Office engineer George Kemp, transmitted and received the first ever wireless signals in Morse Code over open water between Flat Holm Island and Lavernock Point on the coast of south Wales.

Devised as a site-specific performance piece for a single audience member, intended to offer solace in a time of isolation, A Frequency At Lavernock / Amledd Yn Larnog combines the Celtic tradition of spinning a yarn with the surreal visual appeal of Eastern European fairytales.

Many of the events will take place at the town’s intimate Theatr Gwaun, including performances by the Gwaun Trio, young Aberystwyth-based pianist Rufus Edwards and Symffoni Mara.

The theatre will also present aspects of the Ports, Past and Present project – which links port towns around the Irish Sea. This will be showcasing the work of some of their creative practitioners and staging the Fishguard premiere of At the Water’s Edge: Stories of the Irish Sea.

This 90-minute film invites ‘the viewer to slow down and meet the wonderful people of Fishguard, Rosslare Harbour, Pembroke Dock, Holyhead and Dublin Port.

The blend of characteristic voices, the sounds of the coast and the striking visuals of Welsh and Irish landscapes invite the viewer to discover these port towns so full of inspiring history, natural beauty and welcoming people.’

Patrick Thomas, Chair of Trustees at Theatr Gwaun, said: ‘I’m immensely proud to see such a rich and varied programme of events for On Land’s Edge/Ar Ymyl y Tir 2022.

When we launched the festival last year it was very much an experiment. We were delighted with its success, and it is hugely gratifying to see it return so strongly, this time with Arts Council support. This has been a real collective effort, and I am looking forward to attending every event!’

With sound walks and musical recitals, creative writing workshops and much more, this year’s festival team intends to build on the success of last year’s inaugural weekend whilst grounding itself even further in the delightful landscapes and people of north Pembrokeshire.

The full programme for On Land’s Edge/Ar Ymyl y Tir 2022 is available here with all tickets now on sale.