Ten years since the death of Ray Gravell, a book has been published full of some of the best stories about the Wales, Lions and Scarlets legend.

The book’s editor, Welsh opera and classical singer Rhys Meirion, said that he was inspired by the fact that the giant from Mynydd y Garreg was remembered so fondly years after his death.

Everyone, he said, had their “Grav story”.

“Ray Gravell was one of Wales’ biggest ever characters,” Rhys Meirion said about the rugby player who became a respected broadcaster and sometimes actor after his playing days.

“It became clear that there were hundreds of stories about him – and most hadn’t been written down anywhere.” 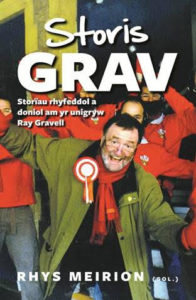 The book, Storis Grav, was launched on the 9th of November at Pontyberem village hall in a concert starring Elin Fflur, Aled Wyn Davies and Rhys Meirion.

The set list included some of Ray Gravell’s favourite songs.

Lefi Gruffudd from publishers y Lolfa said that some of the stories in the new book were familiar but others had not previously seen the light of day.

“There are famous stories in the book, like the one of him interrupting a broadcast of Grandstand during an international match,” he said.

“But most of them are unfamiliar stories that show different sides of his personality, including his kindness and legendary mischievousness.”

The book includes stories told by Gareth Edwards, Phil Bennett, Gerald Davies and Clive Rowlands, and also contributions by his family Mari, Gwenan and Manon, remembering him as a proud husband and father.