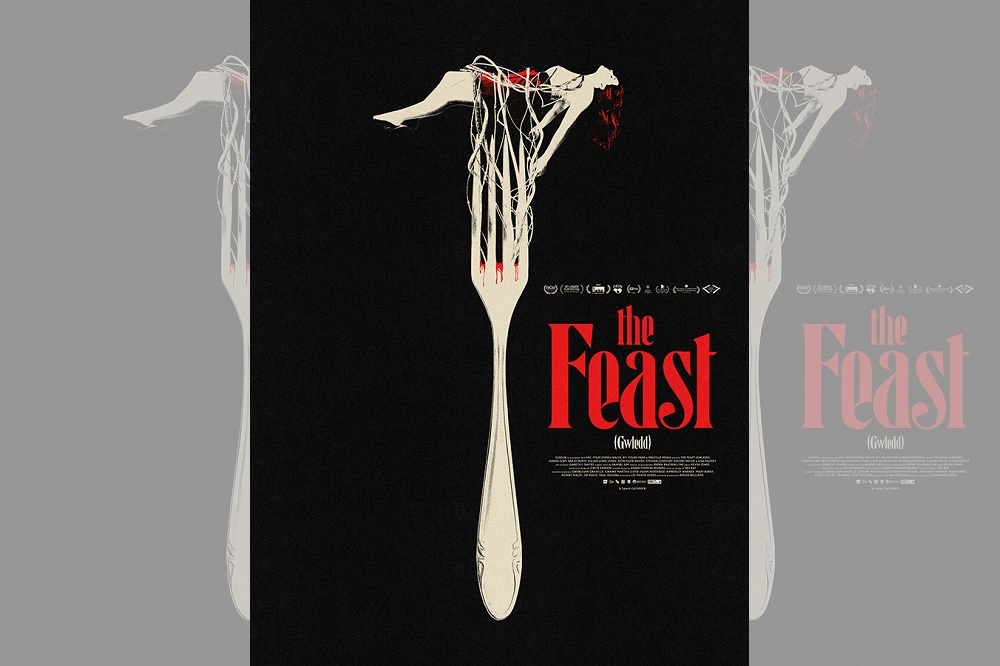 Welcome to the dinner party from hell. In this tense, nervy Welsh language folk-horror-cum-slasher-flick all the attendees have issues.  First there are the hosts, local MP, Gwyn (played with a brooding muscularity by Julian Lewis Jones) who swills good whisky, shoots rabbits and happily accepts backhanders.

His wife Gwenda (a woman of apparent glacial calm, portrayed Nia Roberts) is all show and putting on a front.  She’s hiding something. Heck, it’s a film where everybody has their secrets, a writhing, suppurating mess of them.

Gwyn and Gwenda’s sons, Gweirydd and Guto (creepily played by Sion Aled Davies and Steffan Cennydd) are like a weird reversioning of Cain and Abel, that is if Cain had a history as a sexual predator and Abel had a drug dependency so severe that he would happily shoot up an infusion of local fungi into the flesh of his toes.

His parents have seemingly sequestered him in the countryside by way of rehab, taking him away from city life and its druggy dangers. It’s a city life they themselves enjoy and it seems they only come back to the constituency under sufferance.

They’ve turned what was once a family farm into a status symbol, where the land is valued for the view rather than as a place to work. It’s a subject, or terrain the film’s writer Roger Williams has covered in the past – in such TV work as Tir – as he’s very comfortable with setting contemporary stories in rural settings.

The dialogue is deft and spare and telling and he’s good at creating social awkwardness as well as conjuring up incipient violence.

Collectively this terminally disfunctional family’s problems pale into insignificance when Cadi, the last minute replacement waitress turns up. Initially it seems she’s away with the fairies until we learn that actually she’s apparently marooned in grief after the death of her father in an accident up at the wind farm.

But even that isn’t the whole story but I won’t give too much away. You’d need a spoiler alert announced on a klaxon before I shared that secret.

Suffice it to say that Cadi is the dark axle on which this bloody tale turns. Annes Elwy plays her with a disarming, spacey detachment, even as she wordlessly orchestrates what turns out to be a bloodbath at the house of death.

She seduces Gweirydd before killing him –  and she’s also the one who harvests the fungi from a tree bole which lead to the death of tattoed musician Guto.

In this film there’s blood everywhere, pretty much from the off, when the doomed Gweirydd depilates thoroughly by way of preparing for a triathlon and cuts himself in the process, or when Gwenda proves to be a dab hand at skinning a rabbit.

But soon there is much more blood – great, red runnels of the stuff. There’s an accident with an axe. There’s a very, very nasty incident involving a kitchen skewer. And a moment of what might be sexual vengeance involving a broken wine bottle which I’ll leave to your dark imaginations.

And then there’s a moment toward the film’s end when Gwenda’s mask finally slips and she gets out the shotgun. Here the plot takes a grisly, cannibalistic turn when serving up a leg does not mean a leg of lamb. Grisly, too. It’s not the Welsh countryside depicted in the tourist brochures, that’s for sure.

In all of this there are only two dinner guests, the unctuous snake-oil salesman Euros (Rhodri Meilyr) who is all slicked back hair and fancy shoes.

He is here to try to convince the inscrutable Delyth (Lisa Palfrey) – whose land abuts Gwyn and Glenda’s holdings – that she should allow drilling to take place, as there is apparently a rich seam of minerals buried beneath.

But that’s not all that lies beneath the ground as there’s something terrifying lying in Y Gors, one of those “don’t-go-up-onto-the-moor” rural spots which spawn fear in the locals.

Shot with visual panache by director Lee Haven Jones, the film is noisy, shrill and utterly unsettling throughout.

There are vivid flashback sequences which seem to reprise the film so far and remind one of the hallucinatory quality of Darren Aronofsky’s Requiem for a Dream.

Gwledd/Feast also has an edgy, strident sound-world of drills and high pitched drones to match the edginess of the dinner party guests. But there are also Welsh lullabies and songs, used to great ironic effect.

If you’ve ever seen Bette Davies in Hush, Hush, Sweet Charlotte you’ll know how unsettling a song can be when used out of context and Gwledd/Feast does this well.

One of the unwitting characters in the film is the house itself, which is about as far removed from the usual Hammer House of Horror Gothic pile as you can get.

This one is a set of modern blocks and big picture windows which seems entirely alien in green undulations of the countryside that surrounds it. It’s a home as statement.

When house-proud Gwenda takes one of her guests around the place she is all too eager to share how much things cost. The architect, she avers, tried to source local materials but failed in the main just as Gwenda can’t source the ingredients she needs for the meal, things such pomegranates, unavailable at the local shop.

She shows off the high walled sauna which neighbour Delyth thinks is too much like a cell. There is a sterility to the place, as it’s already a mausoleum. Which it soon will be if Cadi gets her way.

Because any sharp object turns out to be murder weapon in this disturbing house, and dinner guests soon find out that the final course is about as final as final gets.

Recommended, but not for the squeamish, or those who normally enjoy their steaks served rare.