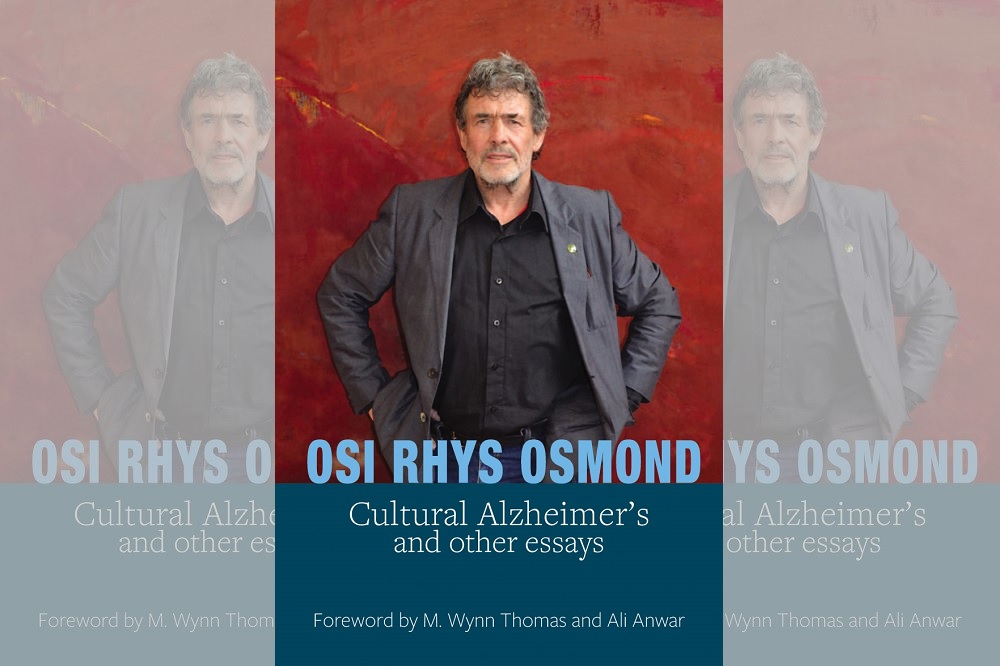 “Strangely, the recent past when re-examined through the photograph, can sometimes look more remote than the distant past.” This sentence appears in an essay re-published in this miscellany of writing by and about Osi Rhys Osmond.

It originally appeared in a book of photographs documenting life after coal in the Afan valley, a fitting subject for Osmond, who was himself a product of the South Wales coalfield, born into a mining family in the Sirhowy valley, north of Newport.

It speaks of how post-industrial Wales can appear distant, left-behind, denuded of the vitality and life that filled those valleys with miners from England, Ireland and further afield.

One became the very icon of Welshness in, for example, the art of Polish exile Josef Herman whose most fertile years as an artist came living and working among the mining community of Ystradgynlais, explored here in the essay “Carboniferous Collisions.”

But paradoxes can by their very nature also be true when formulated as their inverse. The recent past when re-examined through a photograph can sometimes seem less remote than the present.

So it seems with the photograph of Osi on the cover of this anthology: arms akimbo against the ochre background of one of his paintings, face set in a firm but not fierce attitude,

He seems to emerge from this image not only defiantly present, even though he died in 2015, but prescient even, looking resolutely into the future.

This was palpable at the launch of this book in Llansteffan, the coastal village he had made his home, in the vibrant student artwork that was being honoured with a prize in his name, as well as in the life-size reproduction of the book’s cover photo that oversaw proceedings from the back of the hall, directing his gaze into the eyes of the viewer with a look that seems both an invitation and a challenge.

The challenge of the title essay, “Cultural Alzheimer’s,” is to recognise the remoteness even of Wales’ recent past, and that we cannot make a nation from fragments of buried memory.

The coalfields of Osi’s youth have have gone, the winding gear dismantled, their spoil-heaps landscaped for leisure, and I am writing this close to Llanelli’s North Dock, not so very long since thronged with ships carrying copper and tin to the far reaches of the globe, today filled with paddle boarders and swimmers training for triathlons.

“Now that the physical evidence of our past is disappearing,” writes Osmond, “our present, like that of the Alzheimer’s victim, is one of confused distress.”

Much of Wales’ past has been erased to make way for leisure and tourism, remodelled in “a kind of post-industrial botox”, but that very fact seems a threat to whatever is distinctive about the identity of the country and its people, where “outsiders enjoy their breathless leisure time in full view of a society in decline.”

If that view of erasure and dilution represents the book’s challenge to Wales’ sense of identity, then the invitation of this seemingly disparate collection of essays, articles and reviews, is for us to counter confusion and decline with a clarity that comes from the eclectic: from outside as well as within, and from imagination and creativity as well as politics and the economy.

Rather than countering loss of cultural memory by looking to a reductive and exclusionary blood-and-soil nationalism, Osmond seeks to synthesise respect for Wales’ ancient language and culture (perhaps best seen in “Coracles and Cromlechs,” a beautifully written psychogeographical meditation on a section of ancient pilgrimage route), with an outward-looking internationalism.

“One of the principal causes of our cultural Alzheimer’s,” he writes, “is our internal estrangement — we don’t know our own country, our history, or the other language. We will have to restock our memories and allow the matter of Wales to take us forward, and not remain dazed and confused.”

His models for doing so include the trans-avant-garde of Italy, or the Baltic states reclaiming their history from the “dead hand of the Soviet occupation.”

To the question ‘who are the people of Wales?’, Osmond offers one answer in the essay “Development from Within.”

Reflecting on the question with taxi drivers in Cardiff, often immigrants from places with a more brutal experience of being “challenged minorities enmeshed within the power plays of larger forces”, he notes that “they often seemed better informed of our dilemma than many of our deracinated natives”; they take pride in their children learning Welsh in school, and see the UK as representing remote officialdom, often coming to embrace a Welsh identity alongside, rather than replacing, that of the land of their origin.

Many of the quotations from the book I have used so far in this review contain the words ‘we’ and ‘our’, and I have found myself increasingly comfortable using these inclusive pronouns myself, despite also being an immigrant, albeit only from Y Hen Ogledd of Yorkshire, thanks in part to the powerfully inclusive vision Osmond presents:

“After all,” he insists, “you do not need to be an Apache to be an American and not being a Griffiths or a Llewelyn shouldn’t be an obstacle to feeling at home here.”

Any collection, particularly of journalistic and occasional writing like this, is bound to have some elements that time tips into irrelevance, but if anything this volume serves to show that Osi was even more relevant and right than he might have dared to hope.

In his vision for the future of Wales, written just ten years ago, he suggests adopting a new name — Cambria — for the “infant nation” that he envisages growing up and leaving the “not even a particularly good home” of the Union, believing that “Cymru and Cymreig are unfortunately unsettling for some of our English-only speakers.”

Yet a resurgent pride in an inclusive sense of identity symbolised by the national football team’s ‘C’mon Cymru!’ tagline and the enthusiastic adoption of ‘Yma o Hyd’ as an anthem in its traditional Dafydd Iwan folk style rendition, and in the drill beats of Sage Todz suggests there was no need to be so coy about Cymraeg scaring off the Anglophone natives.

If I have made this collection of articles by an artist sound like a political tract, it is because politics, society, culture, and ethics are seen here to be woven through Osmond’s aesthetic sense, as an artist, writer, critic, documentary maker and indeed sometime politician (he was a county councillor and stood for parliament) and therefore permeate this book which manages, despite being superficially a ragbag of ephemera, to present a cohesive polemical whole.

Osi was primarily an artist, and so it is indeed most often to the arts that he looks for explorations of the social, cultural, political and economic challenges facing Wales, whether he is writing about Italian artists, Halloween in America, the art of the quilt, or, memorably and wittily, the unique culture of small coach operators in Wales and their characteristic liveries ,“engaged in a spectacular, spontaneous cultural crusade, entirely of their owners’ creation.”

Alongside warmth, and wit, there is also often a sharpness where needed in the critical tools he employs to explore the cultural landscape.

In “Maker or Mocker? Trends in Contemporary Art” he raises a sceptical eye on the conceptual turn in art that either bypasses the creative process completely, or results in art that needs a curatorial apparatus of explanation before the public can begin to approach it .

“To have doubts,” he bemoans “is to be stuck in the past” and in welcoming the ‘return of the painter’ he tellingly observes that “art practice strives to appear inclusive while surreptitiously refining its exclusivity.”

Here was an artist who spent many years teaching on the foundation course at Carmarthen College of Art, mining at the coal face of craftsmanship and talent, a strong arm’s length from the refineries of academic critics and grant-awarding gatekeepers.

Yet he is never content with simply throwing out the bathwater: in “Irony Politics and Beauty” he makes a powerful appeal to art and artisanship that could be a manifesto for our troubled times: “the transcendental power of the beautiful and the carefully made banishes the despairing irony of our times, and illustrates the possibility of ‘Making Worlds”, and much better worlds, in a positive riposte to our present catastrophe.”

Towards the end of the volume is a piece delivered at the National Eisteddfod 2014 remembering poet, writer and fellow teacher, Nigel Jenkins just a few months after his death, and less than a year before Osi’s own.

He recalls (in Welsh, with an English translation also provided here) their travels together through “the past and present wonders of Wales, the smallest continent.”

These two giants of Welsh culture left us too early, but in this volume and the companion anthology of Jenkins’s essays, Damned For Dreaming, published last year, ’The H’mm Foundation’ has provided a worthy pair of guidebooks to the thinking of these important figures from our recent past who provided so many pointers towards how we might reverse our cultural Alzheimer’s and make a better future.

To obtain a copy of Cultural Alzheimer’s you should e-mail: inquiries@thehmmfoundation.co.uk