Review: Ward Nine: Coronavirus is a frank account of surviving Covid in a north Wales hospital 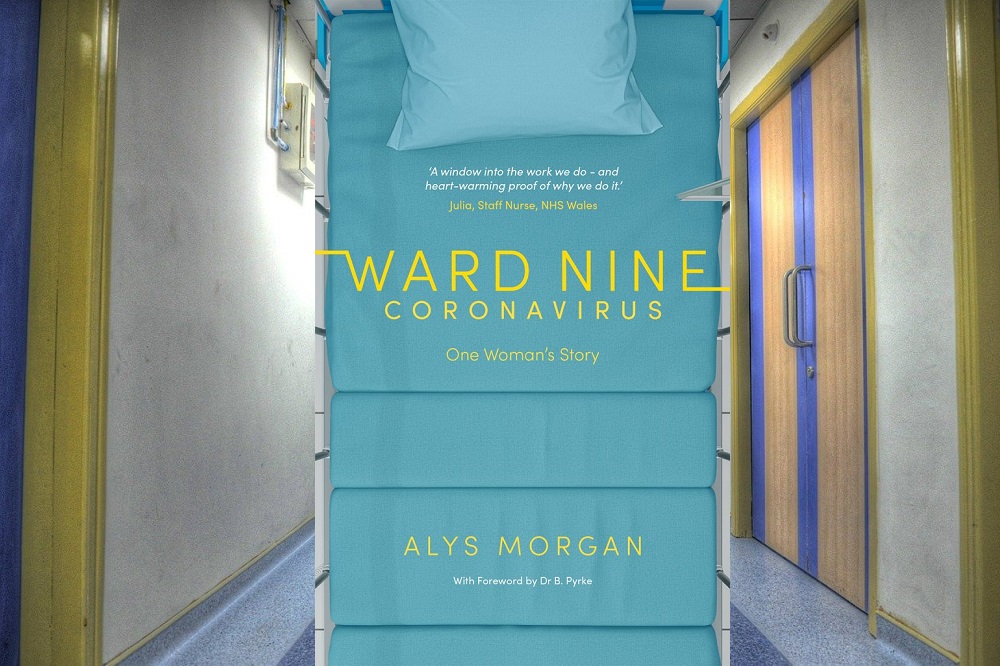 This period is set to be the most scrutinised of the century. At the global level Asia and Australia have responded to the pandemic in a way that Europe and the Americas have not. A torrent of studies and books will ensue; the first wave is already hitting shore.

The imprints of the publishing titans- Penguin, Little Brown, Norton, Bantam- have their Covid-19 books out. Two of Wales’ long-standing publishing names have made their contribution with two contrasting books.

The authors published by the US giants hold positions at Yale and New York University. Seren has published the view from a journalist. In Scotland doctor-author Gavin Francis has written of his experience from the perspective of a GP.

The account of Alys Morgan via Parthian Books is from the other side, a sufferer of the disease.  Structurally Francis and Morgan overlap. Both draw on Daniel Defoe’s “Journal of the Plague Year” as a contrapuntal contrast to 2020.

“Ward Nine: Coronavirus” is a slim book, its primary virtue its directness. Formally it comprises entries in a diary from March 21st to May 8th 2020. On 27th March Alys Morgan, like her predecessor Defoe, observes the same phenomenon, the spectre of illness displacing communal activity. Daniel Defoe: “All the  plays and interludes…were forbid to act; the gaming-tables, public dancing-rooms and music houses…were shut up and suppressed.”

Civil society responded in March 2020 to the spread of infection faster than  government. Morgan records the closure of library and bookshop, the retreat to the home for work.  Drinkers flocked to pubs on their last nights before their closure.

Defoe recorded the same behaviour: “that disorderly tippling in taverns, ale-houses, coffee-houses, and cellars be severely looked unto, as the common sin of this time and greatest occasion of dispersing the plague.”

The disease in its first weeks was characterised as a bronchial disease, mortality occurring as a result of cytokine over-reaction in lung tissue. Quickly, and increasingly over the months, it came to be seen as assaulting human organs in a far wider manner.

Morgan presents with none of the characteristic symptoms. Her reaction is vomiting with its accompanying effects. 15h April is the first record of a burning thirst. After ten days without food she is eventually taken to A&E.

By late April in a north Wales hospital bed the diary is recording  “Terrible choking episode. Ate nothing. Wanted to die.” Her nurse tells her she had been close to dying in her sleep through inhaled vomit. This nadir, physical and spiritual, passes. Two days on she tries a yoghurt. She notices that for all the obscurity of mask and visor the crinkling around the eyes of her carer gives evidence of a big smile.

The shortages of equipment made front page news stories in this period. But it was not limited to masks and gowns; the hospital reveals it has insufficient body-bags for the victims. The names of Morgan’s carers are revealing. They include Yasmin, Fatima, Qasim from Syria, Rosa from Portugal, Maria from Belarus, Izabella from Rumania.  The staff, insufficiently protected, are in ski masks, scarves, plastic aprons. Izabella becomes a patient herself in intensive care with severe breathing deficiency.

Eventually for Morgan the care succeeds and the disease recedes. With her muscles wasted a Zimmer frame is necessary for her first mobility. The account ends frankly. A strand of culture likes to see  profit in suffering, a ennobling of .the spirit. Not so here: “And  that was my experience,.” she writes, “I hadn’t learned anything. I hadn’t become a better person. I wasn’t always as nice to the staff as I should have been, I hadn’t tried hard enough, I hadn’t pioneered any new medicine, I hadn’t done anything noble or worthy. Or indeed anything at all. I went from day to day. I just survived. To tell the tale: to warn you. That in the face of death, we are all equal…”

Illness literature has been a genre in publishing for some years. John Diamond, Brian Lubbock and Christopher Hitchens have been fine literary exemplars. “Ward Nine Coronavirus” is an account without fancy or finesse. The observations are those of an everywoman. “Mum” is a syllable that occurs across multiple languages in different variants. It features as “Mum” twice. The spelling “mom” occurs twelve times.

The book comes with a dedication “Dedicated to NHS Wales which cured my body, and Conwy Mind, who cured my soul.” Ten percent of the cover price of the book is being donated to Conwy Mind.

Ward Nine: Coronavirus is published by Parthian Books and you can purchase a copy here