Santes Dwynwen: Getting to the heart of the Welsh patron saint of lovers 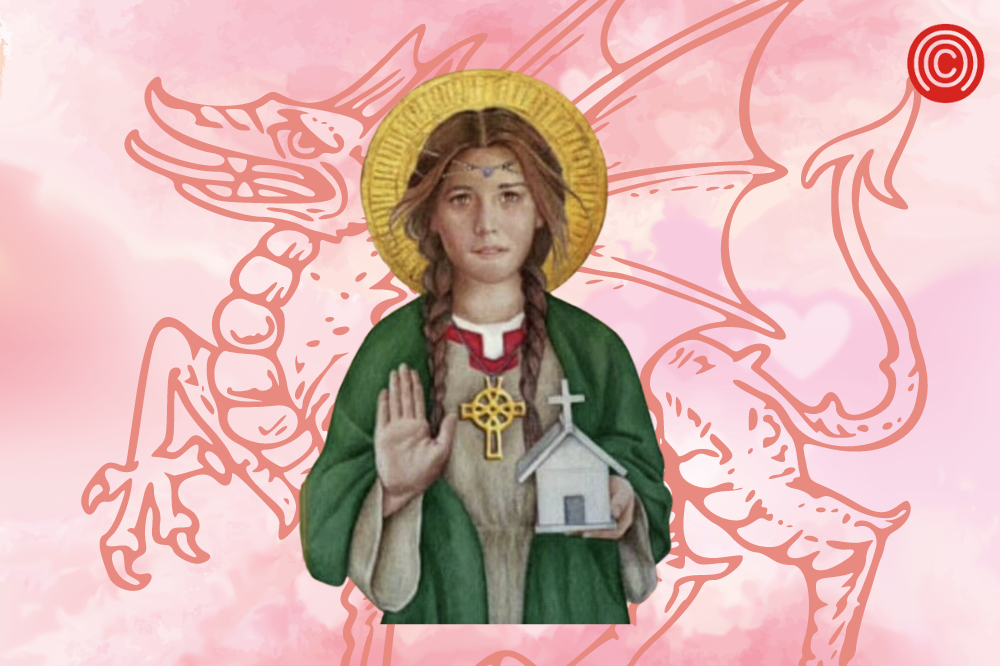 It seems as if Wales has fallen in love with the notion of St Dwynwen’s Day / Dydd Santes Dwynwen.

February the 14th may be Valentine’s Day elsewhere, but here in Wales there is another date where we celebrate all things love and romance. The 25th of January is the feast day of St Dwynwen, the Welsh patron saint of lovers.

It is a special celebration that continues to increase in popularity year on year – but who was St Dwynwen?

The Story of St Dwynwen

Nowadays people recognise St Dwynwen as the Welsh patron saint of lovers – despite being quite unlucky in love herself ironically.

Her feast day is on the 25th of January. But what else do we know about her?

St Dwynwen was a Welsh princess who lived in the fifth century in the area of Wales we now know as the Brecon Beacons.

She was said to be the prettiest daughter of the semi-legendary King Brychan Brycheiniog’s 24 children – or 36 children, depending on which historical sources you turn to.

Brychan’s family formed one of the three saintly tribes of Wales, and as time passed it is likely more and more people tried to claim descent from the holy king – hence the confusion over the number of children.

Dwynwen’s legend continues to be befuddling, with there being several different versions of what happens next.

The princess met a handsome Welsh prince named Maelon Daffodrill. The most common version of the story says Dwynwen fell madly in love with Maelon, but Brychan refused her to marry him because she was already promised to someone else.

However, there are other versions of the story where Maelon rejects Dwynwen, leaving her heartbroken, and yet another version depicts the princess rejecting wanted advances from the prince.

Devastated, Dwynwen prayed to God to make her forget her prince. During her sleep, she was visited by an angel carrying a potion that turned Maelon into a block of ice, and erased him from Dwynwen’s memories.

God then also granted the princess three wishes. Firsty, that Maelon be thawed and released from the ice; secondly, that God look after all lovers; and thirdly, that she remain unmarried.

In thanks, Dwynwen became a nun and retired to the beautiful Llanddwyn Island, Anglesey, where she also established a convent. It is thought this is where she was also buried after dying c. 460 AD.

Over time, the island become a place of pilgrimage, especially for lovers seeking to pray to St Dwynwen. The star attraction was a holy well complete with sacred eels or fish that, depending on their movements, could foretell whether or not a romantic couple would be happy.

The History of St Dwynwen’s Day

While the legend of St Dwynwen is increasingly popular and well-known, it hasn’t always been that way. Pilgrims may have visited Llanddwyn for many years in order to appeal to the patron saint of Welsh lovers, but the story of Dwynwen we recognise now may have much more modern origins.

One of the earliest written references to St Dwynwen dates from the mid 14th Century and can be found in the work of the famous medieval Welsh poet and notorious womaniser Dafydd ap Gwilym.

In Galw ar Ddwynwen (or Beseeching St Dwynwen) Dafydd appeals to the saint to act as his llatai – or messenger and ‘Mediatrix of our love’ – between him and his married lover Morfydd.

In the poem Dafydd goes on to theorise that, as a saint, Dwynwen would be the last person his lover’s jealous husband would suspect as acting as go-between.

We continue to find evidence of St Dwynwen in the early modern period, including calendars from the fifteenth century which note 25th January as her saint’s day, and there is also a reference to her in a Latin Mass from the early sixteenth century.

She features in further poetry by the sixteenth century Welsh cleric and bard, Dafydd Trefor. He produced religious poems, including one in praise of St Dwynwen, describing the pilgrims that travelled to her holy island and sought out the healing properties of the well (interestingly, St Dwynwen is also the patron saint of sick animals).

However, the first time we see Dwynwen’s story as we recognise it today is in the works of the notorious Welsh Antiquarian Iolo Morgannwg (1747 – 1826).

This poses a problem, as it is now widely recognised that Iolo forged several of the supposedly Welsh ‘medieval manuscripts’ in his possession, inventing stories, myths and historical precedents.

He also fabricated ‘traditions’ like the Gorsedd ceremony which are still with us today. Unfortunately, it is likely that the legend of St Dwynwen as we now know it is nothing more than the product of Iolo Morgannwg’s imagination.

Despite this fraud, the legend of St Dwynwen gradually took hold in the Welsh psyche and became increasing popular over time, but it wasn’t until the 1960s that the first St Dwynwen’s Day cards hit the shelves in shops.

Nowadays, such cards are commonplace and it is not unusual to see romantic couples in Wales marking the 25th of January in a special way.

So, this St Dwynwen’s Day, why not celebrate the Welsh princess who was unlucky in love and send a card to a secret crush or your dearest loved one?

Just don’t call it a Valentine’s!