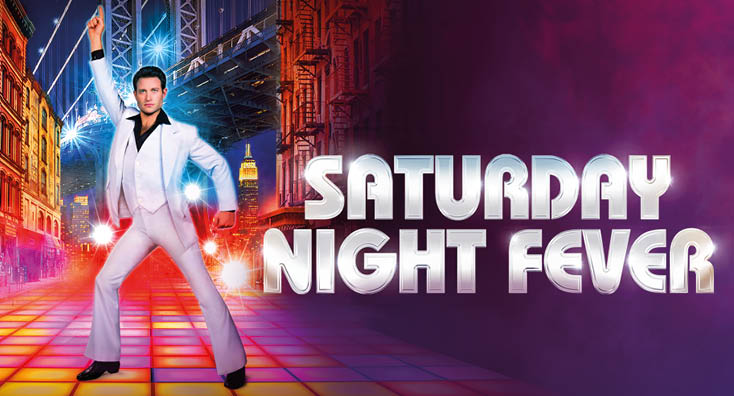 Saturday Night Fever is a film with cult status. To take its formula of iconography in Brooklyn, Travolta, and Disco then morph it in a stage production is a bold move by Bill Kenwright. Boldness often leads to brilliance, or at least a bloody good time. Whilst there are small issues with this theatre production of Tony Manero’s brash coming-of-age story, it is a foot-tapping delight.

As the Bee Gee’s are such an integral part of the identity and atmosphere of Saturday Night Fever, having look/sound-alike’s stood on a balcony overseeing the stage is a deft touch. The quasi-Gibb men, in their sparkly attire, blast out the campy classics from their god-like position. And like gods, their music is the weather which affects the moods and machinations of all below; stage and audience alike.

The set design and staging is incredibly stylish, evoking the 2001 dance club, 70’s New York and the Manero family dinner table with hectic grace. The backdrops swoop from above elegantly and the props seamlessly glide from varying positions. The exterior metallic stairways synonymous with high-rise apartments snake around the stage, leading from Tony’s bedroom -with Rocky poster, to the live band fittingly dressed in 70’s garb and back down the other side which could be a side street, bridge or club gangway.

Richard Winsor plays Tony with panache, showcasing the masculinity, muscles and machismo that birthed John Travolta’s career but lacking some of the former’s natural charisma. He handles the emotional beats well, balancing the slightly bigoted boy with the desire to become a better man. Winsor makes the Brooklyn accent his own, which was a worry of mine that the production would be full of Geezers rather than Guido’s. This lends to the working-class problems of the Italian-American characters, struggling to fit in or, striving for an out. Then comes the dancing. Winsor manages the swaying hips and quick feet but does struggle to be the star amongst an ensemble of career dancers during the livelier scenes. 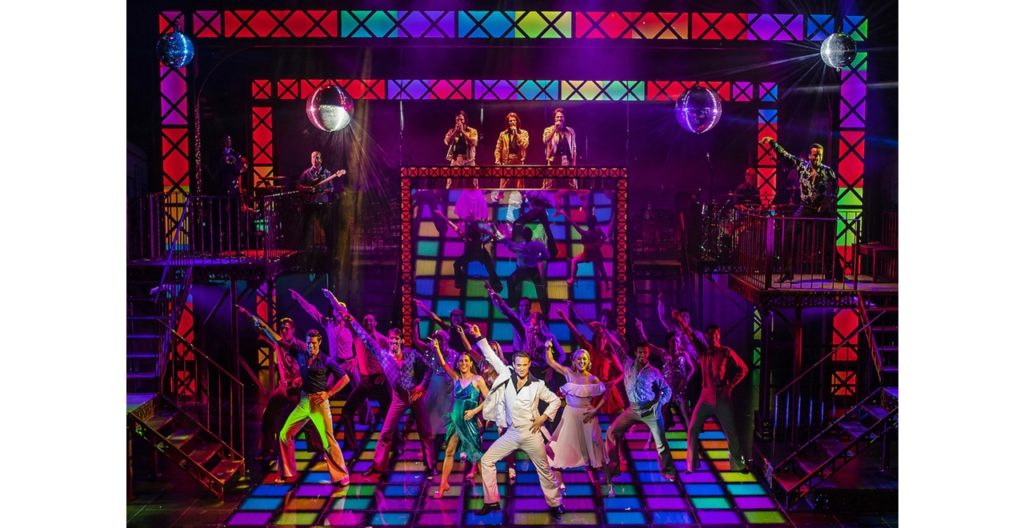 During the discos and dance practices, Saturday Night Fever shines brighter than a disco ball in daylight. The frenetic energy of battling bodies or the entire cast jigging in unison is infectious. A full theatre was testament to that as Venue Cymru hummed with energy, that   was clearly more than just nostalgia. With Theatre naturally inviting a more inclusive atmosphere than Film, the audience are drawn into the (disco) inferno like a sorrowful Dante.

During Tony’s odyssey of discovering destiny, looking to ‘make it’ with girls and keeping his abusive father in line, his companions and cohorts are mostly engaging characters of themselves. Kate Parr plays Stephanie with a sassy self-righteousness and a sweet voice, which she showcases late in the show. Before that however comes tragedy in Tragedy. It is a poorly directed scene where Bobby C (Raphael Pace) sings of his woes and the ascended Bee Gee’s screech against him which makes the grating song scar the ear drums. It should have been Bobby’s moment or the Gibbs’, definitely not both in some supersonic battle.

When the dance competition arrives with its alluring $1000 prize money which means much to many, the dancers hold nothing back. Each of the partnered competitor’s dances are choregraphed to military precision, though again, Winsor and Parr are shown up by the true dancers although this does play into the narrative.

A rapturous ovation was given when all was said but the dancing still continued, actors taking bows in between spins and sashaying fingers evoking the Manero move. Much of the older crowd who grew up with the movie burst into their own boogies – clearly suppressed for two hours – as they offered their appreciation to all involved in the song and dance of coming-of-age. A fitting end to the fever of distant Saturday nights and the music, fashion and frivolities that came with them.