Short story: On The Rising Wind 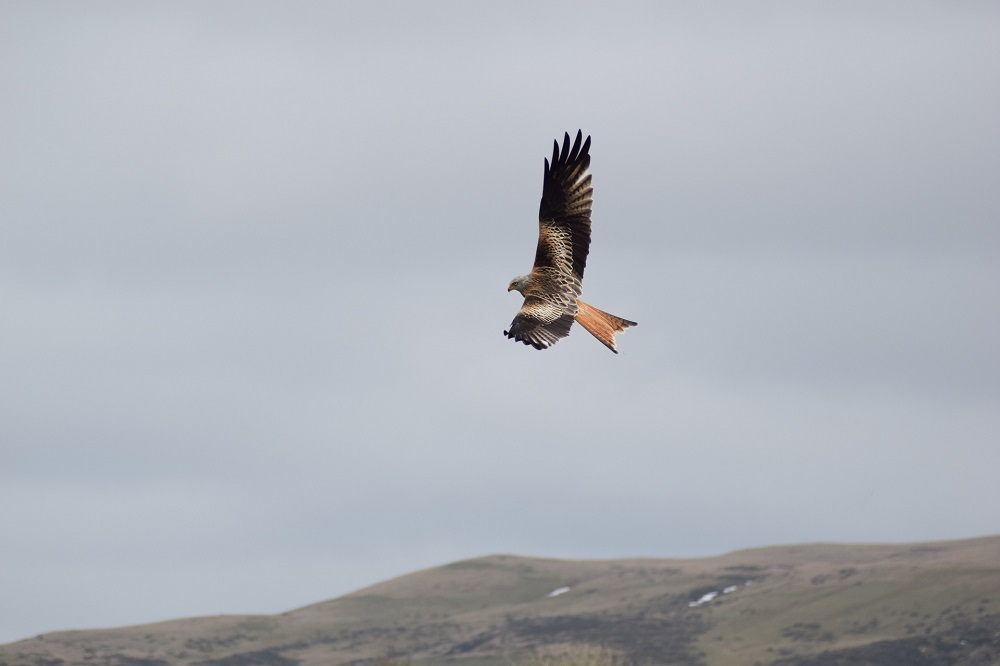 It was a clear day. Three red kites were surfing the rushing air in a lazy circling, their mewing calls echoing among the Myddfai Mountains. Raptors hovering high, above where land and water meet, and giving notice of an inspired dyer, a cook and a curer of ills.

When Mama made her exit, she left us no clues. She’d shared her skills, but her secrets remained just that. The eldest of her three sons, she named me Rhys Cadwgan. My dextrous hands retain their warmth, fashioned to grow plants, extracting the oils that can calm and cure. She made us interested in recipes using herbs, from old manuscripts and carefully- scripted medical texts. Her main concern, carrying on the ancient art of healing, fearing ‘there was no one who would know as much as we know after our time.’ Three was her mantra. In the middle of a difficulty in running the hillside farm she would mutter ‘We have three chances. Everything passes.’

Mama carried an air of delicacy, but not the kind that invites comfort, rather the sense that her heart and mind remained elusive. Unfathomable, a smile would often play on her features. She was as deep as the lake itself. As though casting a spell, she created a tune for us to dance to. We joined in the dance to keep her happy. On summer days, gliding from task to task, she trailed no shadow.

Dada said he found her by the dammed lake of Llyn y Fan Fach, washing her wealth of hair in the chill of the turgid water. He was looking for our erring sheep, but she was far from lost. Standing on the brink of the lake, he claimed he was dazzled by the glare, but the lake I know is an inky blue, in the shadow of the cliff face. Dada called her Rosemary, his “lovely Mari fach.” He was smitten by her.

She cultivated a bedraggled look, as though draped in fronds of seaweed. Frail-looking against the harsh winters, but never minding the cold. With skin which felt moist, cool and damp, her green eyes hinted at mystery, her hair a match for the rufous colour of the red kite.

On her wedding day, she chose a floaty dress in the grey-green of rosemary. ‘Mawredd. How unlucky! It might as well have been black’ was the predictable response carrying a faint note of contempt. Spectators, clucking hens feeding and watchful. She gave them plenty to feed off.

Her first planting within the walled herb garden was rue, the herb of grace. The mossy walls soon crawled with flourishing herbs. She shared with me the best places for growing ‘the magical plants.’ Among them, in the depth and shade of the dingle, the purple foxgloves, a bold spearing of purple.

My two younger brothers had the robust strength of stockmen like Dada. They were geared up for an outdoor life, their hair darker and coarser than mine. Tall and lean, with the same colouring as Mama, I was the one who always hung round her legs as a child. Geraint believed that herbs extended a meal into a feast. He liked to grow sorrel and mint, even though it spread promiscuously, knowing there were endless possibility for herbs. Elfed would trail the hedgerows, seeking out the plants that produce the subtle colours for dyeing the wool that Mama spun.

Known as Morgan-Y-Garth, Dada, had an awkward, trundling gait, more so since he was kicked by Jac, one of our shire horses. In his mud-stained clothes, his hands appeared strong and blunt, often hanging heavily by his side. He was one of the freeholders of Myddfai, part of the lordship of Llandovery. Lord Rhys of Dinefwr had the right to call to his service a doctor, and we were in his sights. A botanist, I became one of his personal physicians.

A smile would often play on Mama’s features, but on one occasion she went too far, laughing openly at the funeral of a much-revered parishioner. Dada tapped her shoulder as if bringing his favourite horse on side. The lack of understanding passed between them like the light brush of a cobweb. He never meant to caution her unduly, making vain attempts to reassure her. She seemed to drift away from us, like wool unravelling. The second caution followed Dada’s plea to begin mixed breeding of the cattle. He slapped her, and felt deeply ashamed, wiping his tears with the back of his hand. His aim was to bring her to her senses. She seemed to be picking at old wounds. The threat of thunder hung heavily in the air.

Geraint’s wedding was approaching and was the culmination of another growing tension. Mama showed no inclination to buy new clothes, and was plainly ill at ease. She was happier when the wind billowed her flimsy smock and tangled her loosened hair. As I grew older I became more aware of her seductive quality, and Dada’s bouts of suppressed anger. Mama could have looked stunning at the wedding but, instead, appeared disinterested. The bride’s parents were well-placed, from local farming stock and with old money. Appearances were all.

The church was full and those gathered were finely dressed. The bridal party had arrived in a flurry. Following behind, Mama stepped lightly into church, with a regal look, as though part of a courtly procession of her own, except that she was solitary, and late. She was wearing her wedding dress. A delicate green, it looked faded and withered. Her bare feet, pale against the stone-cold floor. She appeared strangely provocative, as though trying to extract a response. Signalling his distress Dada’s strong, callused hands grabbed her arm, the imprints of his hands showing clearly on her skin, the play of muscles in his arms as he clenched his fists plain to see. Not tolerant of those who approached too suddenly, she drew herself up, paused, and returned to the church door. When challenged, her eyes assumed the colour of flaming brimstone. I could feel Dada’s pain. It was the third such encounter, spelling finality. He stood as though rooted, still as a standing stone. Hot tears welled and I cried.

Returning from church in disarray, Y Garth, we discovered was deserted, emptied of livestock. The prized cattle, linked to the royal court of Dinefwr, gone. The ancient breed hadn’t strayed, but had followed her. We searched the gateways for the familiar rutting by hoof marks. As she left no shadow, they left no trail to follow, not even a flattening of the still-moist grass.
Late at night I hear her laughter in the rising wind, like a strain of long-forgotten music. When the wind plays with sounds, from the ruins of the coach house, the pungent scent of rosemary drifts through the open window. It pervades the room as gently as a murmuring in my ear, as though she has risen from sleep. The traditional flower of remembrance, trading on my memory, is urging me on.

Patti Webber is a retired teacher who lives in Neath.  Her forthcoming book ‘A Quiet People under a Quiet Sky’ is a collection of short stories and nature writings which trace the lives of individuals intimately bound to the countryside and its ways.

Love this story…have read it to my Grandchildren so many times. My Grandfather told it to me too…a slightly different version but still the same story…the Lady of Llyn y Fan Fach