Short Story: The Boy in the Box Part One: by Margaret Hannigan Popp

‘Lose, lose. What’s the bloody word for it? Cofio is remember. Ffeindio – stupid word that’s got to have been made up – I bet the ancient Welsh didn’t go scrabbling round for mushrooms in Cae Draw woods muttering ffeindio, heh wonder what’s the word for mushrooms – we definitely didn’t learn that I hate the bloody made up words… even if I’m useless with speaking it. Well, not really. Our Welsh teacher was rubbish. Mr Parry – Oh! Colli, that’s it ‘yn colli’ to lose.’

Here I am, forty five, flustered and forlorn. Forlorn? Where did that word come from? Empty. Empty, that’s what I am. Dim byd. That’s nothing. Shouldn’t it be dim beth. ‘Beth’ is a ‘thing’. No, they say ‘dim byd’ for nothing. Doesn’t that mean ‘no life?’ Not empty. I’m full of ‘dim byd’.

I try to rock on my heels to loosen the grip of my leg muscles but all I do is bang my head against the roof truss, on that metal thing with the bolts. I could cry. I could scream. I could swear. But I’m done with all of that.

Now I just want to find that box. I put it up in the attic twelve years ago. So it has to be somewhere down near the eaves, behind the boxes of board games, school reports, old uni papers god knows why I kept them and those fishing rods. Colli…how do I say I lost, colliodd?… no that’s a he. It’s colliais. Colliais yr bocs, I lost the box. Oh there it is !

‘Mum, I’ve been thinking of that time, you know, when I was twelve. I never wanted to talk about it afterwards. Maybe you should have made me. I don’t know. I hated school then. Everyone called me ‘Pocsi Bocsi’. Miss Prys was nice though. She helped me to write things down. Do you remember Mr Morgan, the shop on Glythyr Street with the wine gums?’

Jesus, that bastard Morgan. Slimy bastard, all chapel and no chin. Eyes like steel pins boring through my boobs. Lips edged puce from biting. Teeth, ridged and green and spittle speckled. As if some type of wolf was in his mouth straining to push out of his sunken cheeks.

I knew what you were Morgan. You and your stool. Hop on. Top shelf. Hop off again. Quick as a flash when Mair called ‘Paned o de’, pretending to be all posh and Welshie. Morgan the Hop, that’s what we called him.

Luke! Luke! What did he do to Luke? Oh God! A wave of panic slams into my chest. The dry air of the loft bolts through my lungs and ratchets into my stomach. A big heavy ball in the pit, a devil baby in me. Ysgriffenau! Yes, that’s writing.

Teeth… dental .. of yeah dentyn and meddwg is doctor. Wonder what lips is? Angcofias i , I forget ., Funny I always remember ‘angcofio’. The ball has softened now and the devil is gone. It always helps. When I feel that panic, I make myself think in Welsh or at least remember words, geiriau. As if I can translate the fright into something I can understand and control. It’s what they call ‘neural displacement’, forcing another part of the brain to take over.

Looking through the kitchen window, I think I need to get out into the garden later. The crocuses are weeping now and their papery purple petals skin the ground. The daffodils are holding on but I can see by their burst of colour they will be gone by next weekend. Well we got St David’s Day, Dydd Gwyl Dewi Sant, out of them. 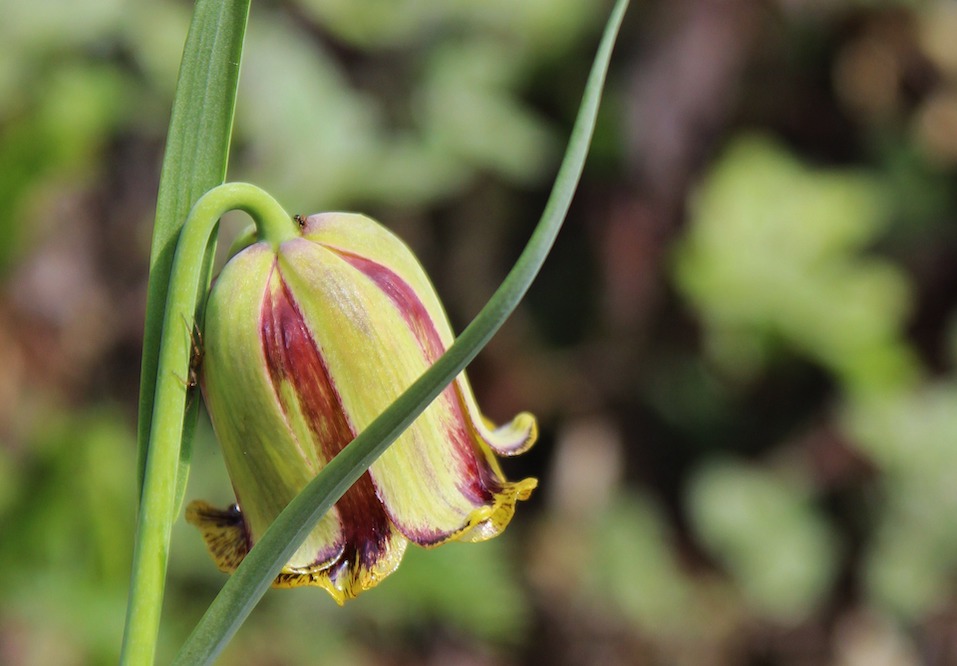 The fritillaries are starting to pop. Pink and mauve bell heads peer out of the swathes of shiny green long edged leaves. A mixture of pontica and melagris, (snakes-head there’s a name), taking over the bed.

I need to cut them back this year, they’re drowning the primulas. But I hate to prune them. You’re a gardener, I say to myself, a professional gardener, you have to get to grips with pruning.

‘Mum, I know that you kept all my school books. Go and look at them. Find the stories that I wrote for Miss Prys. More like a diary with made up bits. Find the one about going to school. You know, when I went to school with Mr Bocs. You need to understand.’

Well the box is here now on the table. The letters PERYGL are faded but they still spell danger. It’s easy to read Luke’s handwriting, small, neat and intense. Like his Dad. 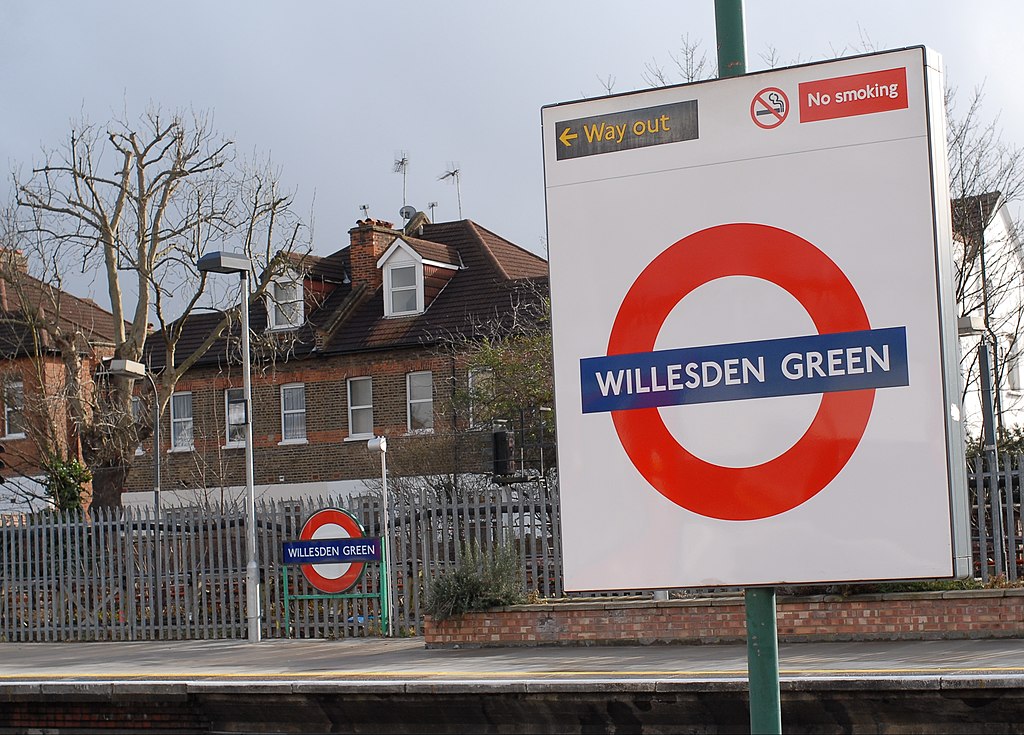 ‘Shmae Linda, sut ydych chi’. Violet looks up and winks across at me. ‘Hello Dafydd’, she calls across from the other desk, ‘Shuh my me too?’. Even the queue in the bank laugh. Who would have thought that! Breaking News !!! HSBC bank 221 Willesden High Street. At approximately 11.30 am this morning, people queuing to for currency exchange broke into laughter.

That was Dafydd. Charming and good looking. People talk about French as the language of wooing but I can tell you all the girls thought Welsh was really sexy. And Dafydd of course.

I loved working in that bank. I adored living in London. The make-up. The clothes. The shoes. I loved just walking down the street. Everyone was so well dressed and so groomed. So much effort. Looking perfect.

I saw the notice in the HSBC in Swansea when the I went with the other A students for University visit. I just applied and I was offered one of the London positions as a trainee desk clerk. It was magic.

‘Oooh,’ she said, all eyes and mock horror, ‘Your pussy!’

God I was mortified, what the hell did Mr Morstern Finglewick make of that.

‘What did you put down?’

‘My makeup bag!’ and she laughed with that silly curly giggle that concealed her clever number crunching brain. She was so good to me when I joined the bank. I was terrified. I couldn’t believe that I had gotten a job in London.

I really couldn’t believe that they wanted me. One minute, I was living all my life in smoky stinking Port Talbot. I shouldn’t say that. It was lovely really. All my aunties in the next street. They doted on me, the only girl. My brothers big with grins, dirt smeared from the rugby field, bright with aftershave on the weekend.

They always had money for me, rich with the overtime in the steelworks.

‘Linda’s not like us,’ they said to Mam when she pretended to protest, ‘she’s clever see. She’ll go far. We’ll see she gets to University down in Swansea. Won’t that be something. Our sister. A professor. Tidy like. That’ll show those wankers down in Cardiff.’

Then they would all shout, ‘Cardiff wankers’.

And my mother would wave her kitchen cloth and slap them.

‘Don’t you boys talk like that in my kitchen.’ They ducked and jostled to get away from the stinging slaps. White flour welts on their red rugby shirts.

‘Duw, duw, those boys, will they ever get out of this house. I spend all my time cooking for them, washing for them, telling them to behave.

You won’t have that life, Linda. I wouldn’t change my lot but I don’t want that life for you. You wait and see, we’ll have that money. Ah, they are good boys. They help me put some by. You just keep on with your studies.

When Mr Thomas said to me, ‘Mrs Jones, I’m expecting great things for Linda, she’ll be back here for her A-levels.’ Well I thought my heart would burst.’ Well, I did break her heart. I couldn’t wait for University to get me to London.

Mam was from Newport. Her father was Irish from Kilkenny and her mother’s family were English from Lancashire. So, she didn’t know Welsh or anything like that. She couldn’t really say ‘duw, duw’ it was more like ‘juju’.

Sometimes she said, ‘O Holy mother of God’. And if she could still talk above our whooping laughter she added ‘and all the blessed saints in heaven.’

My aunties though were proper Welsh. They helped me with my ‘gwaith cartef Cymraeg.’ They were chapel Welsh too so they made sure all my ‘treiglai’ were correct. Pronunciation and mutations were all corrected and perfected.

My Dad died before I was born. I was a late baby, an afterthought. There was Eddy, Joe and Jack and then eight years later me. Before I was born, my father was killed on the bridge site. He was a works foreman, a good job, with Evans Civil Engineering contractors.

Because that was the type of man he was and he knew after the match the day before, the boys would be late to come down and strike the shutters.

So, he went down early to lose the bolts so that the timbers would be eased. But one of the bolts failed and the steel pin sprung back. He fell off the scaffolding. It broke my mother’s heart, ‘But’, she said, ‘I had to keep going. Put your shoulder to the wheel. That’s what the old people said. I had the boys and you were coming.’ I was born to a widow woman.

‘Mum, why didn’t you tell me all of this. How could you keep all of these secrets? It’s not like I’m a child. I’m a doctor for heavens sake. I sit and talk to people. I tell them that the scan is serious and I will explain their options. People trust me. They trust me with their lives. They trust that I will tell them the truth. Why couldn’t you trust me? Why?’

Part two of Boy in the Box continues tomorrow…

Great to see this here. Looking forward to part 2…