Anya Kashirina squinted at the headstone in front of them. ‘Well, Viktor… Gregorievich… Veselovsky is here now. See for yourself.’

The two of them leaned over Veselovsky’s plot, and peered.
‘Loving father and grandfather,’ read Anya Kashirina.
‘Patriot, sailor and kindly friend to dogs,’ Golubkin added. ‘Yes, yes, I know,’ he said, straightening himself. ‘But Anya—’
‘So my Yegor must be somewhere else,’ she said.
‘But this doesn’t mean that he—’ said Golubkin.

‘His place has been taken,’ said Anya Kashirina (puzzled by Golubkin’s inability to comprehend). ‘Where can he have gone?’

‘But it doesn’t follow that he was interred at this precise spot,’ said Golubkin. ‘He must be somewhere else.’

‘Let’s go home,’ said Anya Kashirina, ‘and have some tea. We won’t find him here in a hurry, that’s for sure. Goodness knows where he’s got to.’

‘Heaven, perhaps?’ ventured Golubkin as he took her hand and helped her down onto the path.

‘Maybe,’ said Anya Kashirina (not listening). ‘You know, towards the end, he was always wandering off. Always,’ she said.

Anya Kashirina cut two squares of baklava and two slices of biskvit and sat down at the kitchen table in her apron. She and Golubkin looked like an old married couple, but in fact were not. Each was old, yes, but they were not married and had only been spending time together since some ten or so months earlier. Both had grown lonely after losing their spouses and disliked being shut up in their flats. For Golubkin to more or less move in with Anya Kashirina seemed logical to them both. However, he retained his own flat (four floors above hers) as somewhere to go when one or the other of them felt needful of space.

They drank their black tea and ate their sweet fancies without speaking, as if words were something of which, in their long lives, they both had had their fill. Anya Kashirina tidied the flakes and crumbs on her plate with her knife. As she did so, she thought she heard Golubkin’s teeth – grinding. She looked at his mouth while raising her (better) left ear.

Most nights Golubkin retired to his own flat, but from time to time Anya Kashirina asked him if he would be staying. By which she meant in her bed. When there, they kept to separate sides so that each never touched the other. If, unintentionally, their bodies ever did make contact, they apologised quickly – ‘prosti’ (though in time the embarrassment they felt softened and while the apology still came it came not quite as seriously or as hurriedly as before).

That night, after the visit to the cemetery, Golubkin lay next to Anya Kashirina. He was sideways, facing her on his pillow, and she was on her back. It was not yet fully dark when they retired and, as he looked at her, he could see in the gloom of the bedroom the shiny wateriness of her eyes.

‘Where could he have gone?’ she said, looking up at the ceiling.
‘He can’t be far. We shall find him,’ Golubkin replied.

A police siren wailed in the streets of their neighbourhood. The two of them fell quiet, lay still – sensing, as they did so, their own ancientness and exhaustion. She heard his shallow breaths. He thought of her liver-spotted hands – the wedding ring on her finger, too tight to remove (even if she had wanted to).

In the coolness of the bed, each wanted to hold the other.
And yet, they did not.

In the days that followed, they made three visits to the cemetery, stopping at places where Anya Kashirina felt Yegor Dmitrievich might be found.

‘He could be here,’ she said, lifting the low branch of a yew to find the verdigrised headstone of an artillery officer mortally wounded by the British in Crimea. ‘Or perhaps here,’ she said, tugging the ivy on a tomb to a civil servant in the Education Ministry and the wife who had pre-deceased him in childbirth. ‘Or even here,’ said Anya Kashirina, wiping snow from the grave of a girl of fifteen. At which point, Golubkin decided they had hunted the cemetery quite enough.

On the kitchen table in Anya Kashirina’s flat, he wrote out a list, with one of his old tailoring pencils, of all of the cemeteries in their area. Over the next two weeks, save for one day when the snow was too heavy to go out, they travelled to each one of the graveyards via the trains of Moscow’s metro: she in a headscarf patterned with camomiles, he in his muffler and astrakhan hat.

With each unsuccessful visit, Anya Kashirina began to wonder about her past. Although she said nothing to Golubkin, she grew fearful – worried that none of it had actually happened: those years of Yegor Dmitrievich slurping black tea from his saucer, snoring (open-mouthed) in their bed, singing folk songs – out of tune – in the bath.

Eventually, Golubkin wrote to the authorities – in his thick, crayon-like pencil – asking for help.

The pair of them took the envelope to the post office. In the queue, Anya Kashirina held Golubkin by the hand.

A month or so later, a letter came back from the authorities, with details of a plot in a cemetery at Novosibirsk. The author – an official in the appropriate regional ministry – said that this, unquestionably, was the resting place of Yegor Dmitrievich Kashirin. At the foot of the brief letter, the writer had applied his rubber stamp.

‘Ah, Novosibirsk,’ said Anya Kashirina, who seemed to Golubkin satisfied at last.
In her head, though, she struggled to understand how her husband had moved so far from Moscow; the facts of his funeral being beyond her recall.

‘Do you wish us to go?’ asked Golubkin.
‘Where?’ said Anya Kashirina.
‘Novosibirsk,’ he said. ‘We can go if you want to.’
‘No,’ she replied after a moment. ‘We’ve had enough of him running us around. He can stay put for a while – scaring us both as he has.’
She smoothed a red check cloth over the kitchen table.
‘And you’ll be staying?’ Anya Kashirina asked.
‘If you want me to,’ Golubkin said.
‘Then we shall have baklava. Now, where did I put it?’ 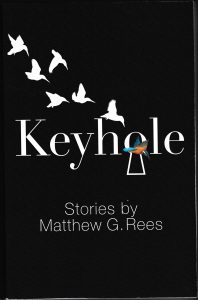 Fiction by Matthew G. Rees has been published and read internationally. Keyhole, a critically acclaimed collection of stories leaning to the supernatural set in Wales and the Marches, was published by Three Impostors press, with photographs by Rees, in 2019. It’s  available via their website threeimpostors.co.uk  and from selected booksellers.

Originally a journalist, Rees taught English in Moscow prior to undertaking a PhD at Swansea University. The Russian capital has been the backdrop for several of his stories. He is also a playwright. A new story collection and a novelette are among projects intended for 2020/21. More about Rees can be found at matthewgrees.com