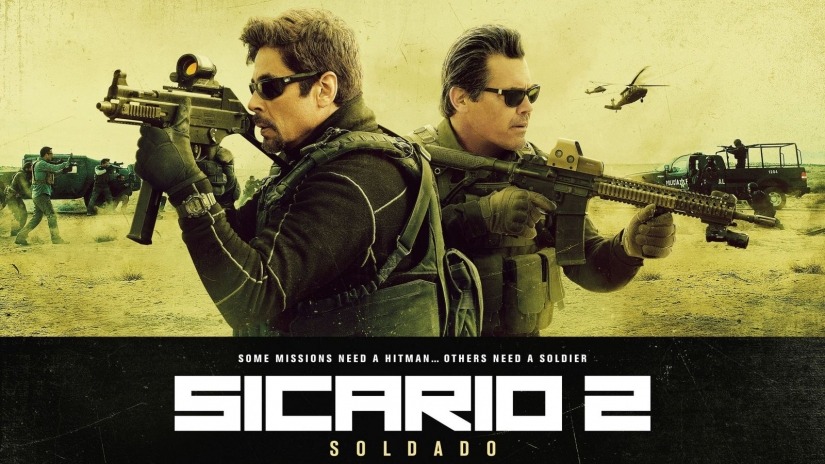 Taylor Sheridan is carving his way into the shortlist of thoughtful, brutal, gifted screenwriters with the deftness of a bowie knife in the hands of a hunter. He utilises real-world scenarios to tell tales of harsh landscapes and the harsher humanity that inhabit those places. Sicario, Hell or High Water and Wind River have all been terrific Thrillers that unravel unexpectedly, clench the heart and drop scathing dialogue that weeps truth. He doesn’t allow the wounds to scab over, instead scratching at them with larger themes of morality, humanity, race, etc., that are too often overlooked in pictures with gruff men and big guns.

Sicario 2: Soldado starts with with failed US Border crossings, cruel acts of modern terrorism and, Zero Dark Thirty raids before we get to, CIA Black Ops agent Matt Graver (Josh Brolin – continuing his superb Summer), attempting to covertly incite a war between Mexican drug cartels, “Just like we did in Afghanistan”. He enlists the help of old friend, Alejandro (Benicio Del Toro – broken, battered but never better), the attorney-cum-Sicario. A plot to kidnap a Cartel leader’s daughter (Isabela Moner – holding her own with veterans Brolin and Del Toro) and, frame it on a rival cartel implodes which could reveal the US Government’s amoral involvement in such affairs.

In the aforementioned opening sequence, Mathew Modine’s Secretary of State issues a statement to any and all terrorist groups (In smuggling terrorists, Cartels have been dubbed just that) that they will, “feel the full terror of the US Military.” This isn’t a politician’s pithy promise as the following two hours are a showcase of reign. The unprincipled depths that Graver plummets to do what he is told by his superiors are heinous. Where Sicario showcased him as more of dabbler in dirty hands, Soldado (meaning Soldier) shows his scars and stains. You could be mistaken for thinking Graver is the hero of this tale in the First Act, nonchalantly bleeding information from interrogations without any physical pain inflicted. Soldado has no heroes.

Emily Blunt isn’t around this time to question the ethics of the government’s tactics. As such, Soldado acts like a case study in decay of morality in our world where: gangbangers are fought with helicopters, suspect’s homes bombed half a world away with the press of a button, cops killed  as a contingency. Director Stefano Sollima (stepping into the mammoth boots left by Denis Villeneuve) understands Sheridan’s script and propels the plot with interspersed scenes of shoot-outs and chases. He understands when to give the audience a break, to digest the terror of fighting terror with terror, to establish the vast barrens (with help from DP Dariusz Wolski – not quite Roger Deakins) where hope withered long ago as the openness is as constricting as prison walls.

That Soldado, mostly doesn’t feel like a sequel (more on that soon) is to its credit and the credit of the crew. A new director, DP, composer (Hildur Gugnadottir utilising tragically deceased Johan Johannsen’s main themes with her own) and, the lack of the original’s star figure in Blunt, is an unenviable task. That kind of shift in personnel is what the straight-to-DVD market is for. Yet, they all align to stay the course set by their predecessors, to continue the story of Graver and Alejandro and the good fight gone abysmal in one of the year’s best films.

Soldado is a study in ethics, good and bad being mere book ends in a library of amoral ambiguity. A poster for ends justifying means being just another façade for the perpetuation of war in a world where, war is profit and death a chasm to be filled so long as it’s not good men under god’s nation. Yes, Sheridan does write like Cormac McCarthy and, to wonderful, nihilistic aplomb.

As the plot thickens to bursting (not one I want to spoil), the Third Act is mix of inspired storytelling that grinds the teeth and, the realisation that, Soldado, is part of a franchise and will push into a third film. It doesn’t undo any of the good will (if there is such a thing) established but does reflect that the cinematic world is one of greed too. How can I complain if, when the reins are passed again (Sollima believes that no one director should span their initial film in the Sicario franchise), another team of passionate, capable and liberal filmmakers can wring the tension, fear and moral decay from their film. Piecing together a puzzle of pictures that raise awareness about our governments, our militaries and our first world national pride whilst shocking the system on a journey that leaves you feeling like you’ve been beaten and bagged before being interrogated about heroes. And if they only exist in the movies.