When towering Welsh football colossus John Charles was transferred from Leeds United to Juventus in 1957, it was for a then British record £65,000 transfer fee.

Little did he know it at the time but three years later he would be making records of his own.

An anomaly, a preternatural talent, a one-off, an otherworldly presence. Call him what you will. He was Welsh, fiercely patriotic and fittingly for a native of the land of song – a formidable singer, to boot.

While much of his playing career is well documented, his brief flirtation with a singing career is less well known.

It is something of a cliche to suggest that just because he was from Wales, he would be a natural singer, however his booming baritone was as formidable as Charles was a battering ram of a centre forward.

He was entertaining to watch on the pitch, tearing up opposition defences and was similarly adept at keeping his teammates amused, settling quickly into life in Italy and all its social opportunities.

The Swansea-born Welsh international, who was the driving force behind his national side’s passage to the 1958 World Cup quarter-final in Sweden, became a huge star in Italy and beloved by Juve’s fans who named him ‘Il Gigante Buono’ (The Gentle Giant), due to his imposing frame, sportsmanship and incredible record of never having been booked or sent off in his entire career.

The talismanic Welshman, who died aged 72 in 2004, formed a prolific partnership with teammates Omar Sívori and Giampiero Boniperti in Juventus’s front-line – the trio nicknamed The Holy Trident.

He was adored by his teammates for his genial nature, steadfast loyalty and his predilection for bursting into song at a moment’s notice.

Given the subject, it is no surprise it found favour with Charles. Originally released in 1947 by Merle Travis, the song is about a coal miner, based on life in mines in Muhlenberg County, Kentucky.

Apparently, all it took was for one player to start singing ‘Sixteen Tons’, whether it was at a party or on the coach, and up would get the Welshman to finish the song off.

Writing in his 2003 autobiography ‘King John’, the footballer explained how his brief singing career took off.

“It all began at a party with some Italian friends when someone suggested it was my turn to do a number. For some reason, they liked my deep, Welsh baritone and told me I should take lessons,” he recalled. “I took no notice of it but the next morning the same friends called and took me to the Rai-TV Italian state-controlled radio studios where I was introduced to the resident bandleader William Galassini.

“Much against my better judgement, I was persuaded to sing for him. I played along thinking it was a hoax, especially when they produced a tape recorder and asked me to warble a few hit songs into the microphone.”

But it was no joke and Charles said he did not recognise his voice when they played the recording back to him.

“Eventually, I agreed to learn how to sing in front of an orchestra,” he said. “Then came the records. I made two. The first had ‘Sixteen Tons’ on one side and ‘Love in Portofino’ on the other. That song was specially written for me by a good friend of mine, singer and composer Fred Buscaglione, who, sadly, died in a road crash in 1960.

“The second record had me singing ‘Non Dimenticare (Don’t Forget) and a song called La Fine (The End).” 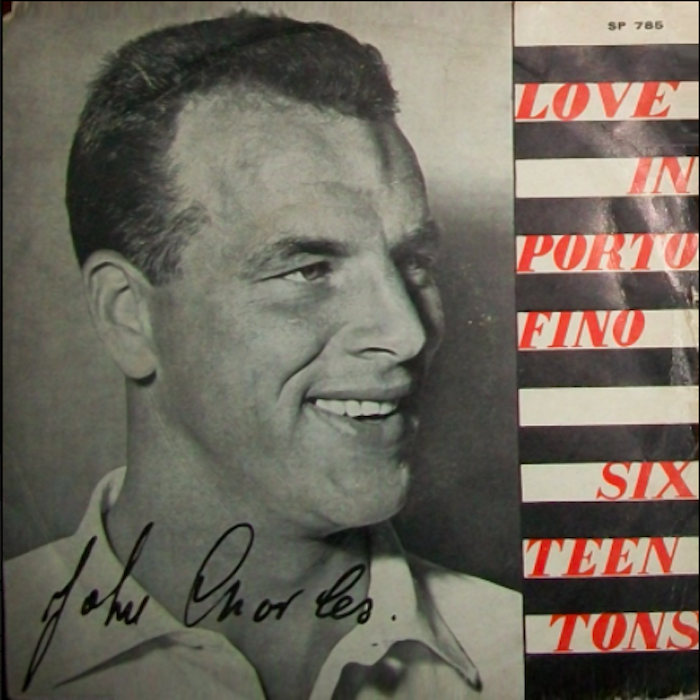 Listen to ‘Love In Portofino’

Charles recorded the tracks with the record company, Centra-Fonit and received vocal coaching from Gallasini who remarked, “Charles has an astonishing sense of swing and a tremendous feeling for rhythm.”

Released within a month of each other and sharing an identical cover image, the singles were well received by the Italian public and especially in Turin – the home of Juventus.

All four of his songs were played at (Juventus’ ground) Stadio Comunale before the 3-1 win over reigning champions Milan on 15 May 1960.

‘We were out in Turin to play Juventus in a friendly, recalled the former Tottenham Hotspur and Wales left-back Mel Hopkins in Welsh author Mario Risoli’s book about Charles – ‘Gentle Giant’.

“John had made two records at the time and whichever bar you went into they were playing either one or the other.”

A modest Charles was far less effusive about his burgeoning singing career, even admitting he was a little embarrassed about it.

“The records did not sell particularly well, although well enough,” he said. “I was slightly embarrassed about my new career to start with and did not even tell my family back home in Wales about it, but the Italian public seemed to like my records even if my wife Peggy didn’t.” 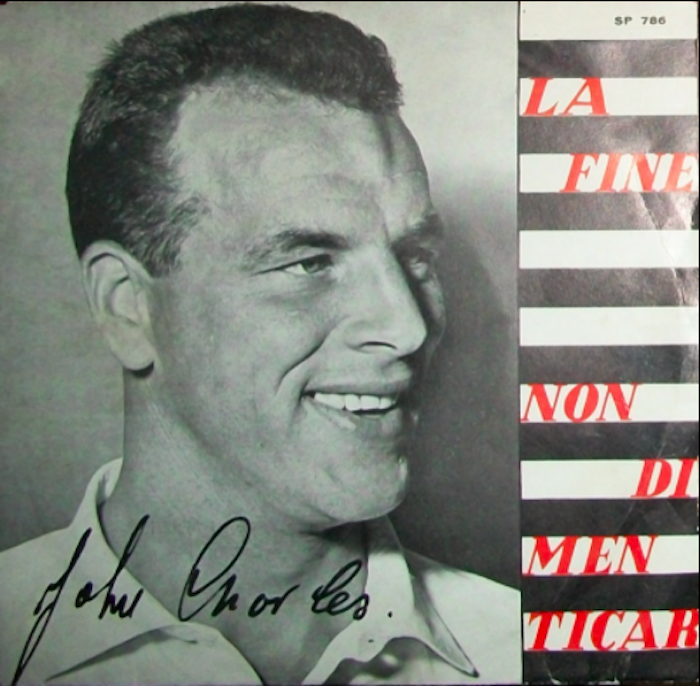 His first wife Peggy was singularly unimpressed with her then-husband’s singing abilities. ‘I used to get embarrassed because I didn’t think John could sing, he just had a deep voice,” she said. “The whole thing was just a gimmick. He did it to make money but I don’t think he made any money from those records. As for ‘Sixteen Tons’, I hope I never hear that song again.”

To satisfy demand for live appearances to promote his records, in the summer of 1960 Charles set out on a tour along La Versilia, the stretch of coastline along the Gulf of Genoa, taking in high-class resorts such as Alassio and Viareggio

“I enjoyed every minute, travelling with an impresario-cum-pianist-cum-driver-cum-songwriter,” he said. “It was great fun singing to the tourists, relaxing on their summer holidays. But I hardly made my fortune, in fact, I probably lost out on it, all told.”

The player recalled twice not being paid when he sang in one particular restaurant.

“When I got up to perform, the restaurant was empty, but there were hundreds outside just listening to the music,” he said. “The owner was distraught and said he could not pay me because he had no customers and I would have to do an extra night for him.

“I agreed and the same thing happened again with about twenty diners and literally hundreds of others outside. I finished up working two nights for nothing. I should have sent my jack-of-all-trades out with a hat to collect from the tourists.I would have made more money busking outside on the seafront.

“My feet earned me more money than my singing voice.”

After his brief foray into the world of music and despite approaches to record more songs,Il Gigante Buono decided to call time on his barely formed singing ambitions, viewing it as little more than a welcome break from the rigours of playing football for the biggest club in Italy.

“As far as I was concerned, it was the end,” he said. “Although I appeared in front of the television cameras and went on my little summer tour, I wasn’t too keen when (vocal coach) Galassini told me he planned a new series of songs to match my voice.

“To me, it was just good fun and good relaxation, something that was sorely needed after the intensity of the football.

“In Britain, footballers were admired but they were part of the working community, earning not much more than the bloke next door who worked down the local factory and paid his money to watch you on a Saturday afternoon.

“In Italy, for me, it was different. I was big and easily recognised. I played for a top, successful team and I was looked upon as a star. I was careful not to let the adulation go to my head because I had seen the effect of that on players in both England and Italy.”

There was an unforgettable highlight for the Welshman however, when he. made an appearance alongside Nat King Cole on RAI’s Saturday night television show Il Musichiere. Such was his stature in Italy he headlined above the iconic American crooner.

When you compare the Gentle Giant’s classy excursions into music against other players who have ventured into the world of music, they more than stand the test of time.

When placed alongside the likes of Kevin Keegan’s 1979 single ‘Head Over Heels in Love’ – a failed attempt to reinvent him as football’s answer to David Essex , Hoddle and Waddle’s moody mullet powered 1987 single, ‘Diamond Lights’, and Gazza’s misplaced revisiting of Geordie folk rock band Lindisfarne’s hit ‘Fog On The Tyne’ in 1990 – the Welshman’s efforts are timeless standards.

And then compared to Ian Wright’s 1993 turkey ‘Do The Right Thing’, (the right thing of course would have been not have released the song) and Andy Cole’s abysmal 1999 clunker, the laughably inappropriately titled ‘Outstanding’, well the Welsh legend looks like a giant of football and of music.

Yawn, what is it with this website and soccer……