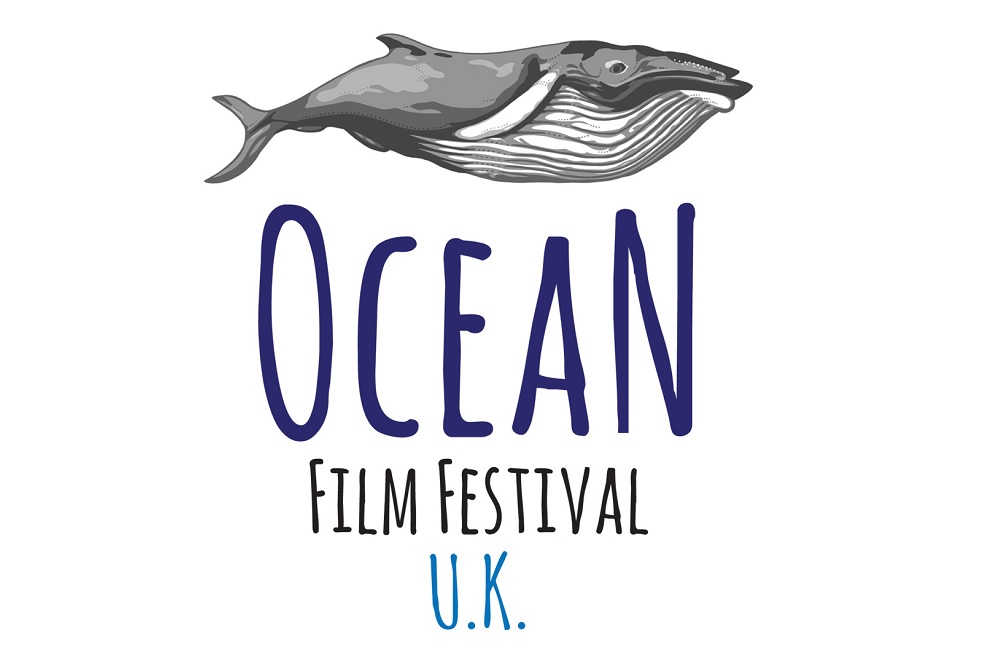 Venue Cymru’s ground floor bustled with interested folks perusing all manner of stalls. Though unlike the foreign streets we’ve all sojourned in hope of purchasing a divine trinket to hang on our walls, these stalls were giving to the punters.

Stickers, postcards, Marine Conservation Society strategy guides and chances to win oceanic prizes during the interval. The luminous rash vest made of fully recyclable materials gazed at me like a mystical, anthropomorphic character; Aladdin’s Magic Carpet.

It too would enable my own miraculous rides worthy of song. Though I’d be on a surfboard, dropping in on a humble three-foot wave at Rhosneiger as the rashy clung to my waning body heat during the biting winter surfs to come.

Then the alarm bells called. Time to find my seat and hope this year’s films lived up to last year’s eclectic list.

The globally sourced and recognised Ocean Film Festival came to North Wales on the 29th of September 2018. Its visual allure, along with lessons toward the lack of humility within humanity, proved a successful night.

The short films on offer inspired the pursuit of dreams, taught the futility in complacency and ignited the intricacies of imagination.

After a quick introduction by the colourfully clad Master of Ceremonies to the mission of the Ocean Film Festival and, its mantra to usher in a more sympathetic view to the plight of the Oceans and all whom benefit from their omnipotence (Spoiler Alert: WE DO), the films began.

Kiwi Breeze: The tale of a determined man named Steve -living in South-East London- who’s dream to travel back to his native New Zealand saw him spend nine years building a yacht in his back garden.

The film is documented by Ruari Muir, Steve’s (or ‘Noah’ to Ruari and his then, fellow young friends) next door neighbour who grew up seeing the construction of the yacht, the Kiwi Breeze. A treat to any and all living in labour of their dreams.

One Breath: A Life Without Gravity: Christina Saenz de Santamaria and her husband Eusebio are freediving record holders. They love the freedom of floating 85 metres below the surface with a pod of playful dolphins.

Their love and commitment to one another lays the foundation for them wanting to set a new world record together.

The footage of their extraordinarily deep dive leaves one feeling breathless. When they rose to the light, their inhalation resonated around the entire theatre.

The Big Wave Project: Five years in the making, this film lends spectacular footage to a band of merry surfers all in pursuit of the biggest waves Mother Nature can muster. Candid accounts follow incredible shots of to some of the bravest spirits on a surfboard.

These mega-waves – the climax of this 20-minute film is Aaron Gold’s journey down an 80-foot behemoth – are so beautiful and yet so godly in their power, that I heard more guffaws and gasps here than I had in the last five Horror movies I’ve seen in the cinema.

Where it would be easy to dismiss these surfers as lunatics, their honesty in their connection with Nature and the metaphorical meanings of the Ocean and its ever-giving glory are heartfelt and grounding.

This isn’t about money or fame for them, but a camaraderie as they momentarily tame Lovecraftian beasts of the sea in search of a spiritual nirvana unlike any on Earth.

Hyperbole seems to become rhetoric when explaining surfing to non-surfers but as a humble lover of the sea who once cut across a titanic(!) ten-foot wave in Morocco, and a writer, I can attest to the inexplicable aura of riding waves.

Blue: “To experience great clouds of underwater life. To be completely enveloped by a throng of prey…and circling predators. As a free diver, I experience those moments in wonder. But this is an illusion of abundance.”

Whilst sounding like an epitaph, these words open Blue and set the scene for a journey around the rural pockets of the blue oceanic world. Yet in these rural locations, pollution still devastates.

Lucas Handley begins our look at the decimation of coral reefs through climate change and the rippling effects of oceanic industrialisation.

Philip Mango is a sea ranger working on Australia’s Cape York. He offers insight into the thankless work of cleaning the sparse beaches of illegal fishing nets and the tragic skeletal systems of turtles that were trapped and drowned in them.

If these insights weren’t upsetting enough, Dr Jennifer Lavers and her team working on Lord Howe Island give awareness to dying sea birds.

The footage of her saving one chick with a bottle cap stuck in its belly is contrasted with five dead ones laid on a gurney, the contents of their bellies displayed beside them as if they were collectors of non-recyclable human waste.

And of course, they are, inadvertently. The plastic is passed from mother to chick in feeding. Some of the chicks Dr Lavers has performed autopsies on have had over 275 separate pieces of plastic in their stomachs.

Blue is devastating. A depressing portrait of the abundant, diverse life affected by our desire for ease in mass consumption.

Director Karina Holden closes the film on a hopeful note however, letting the masses of her global audiences know what they can do to incite a positive change and, bestowing them with the spirit to want to.

During intermission, I discussed with my fiancée what we had seen. We shared dismay at humanity and our fickle, selfish ways. Then I mingled with friends as I attempted to cross the masses of the thirsty and inspired.

With fellow surfers, I discussed the Big Wave Project, but all dialogues led to Blue. I let them know of my idea to write a screenplay for the third film in the Finding Nemo trilogy. It’ll be a short film. Title screen dissolving into misty waters cluttered with the debris of capitalism. Cut to an anemone gusting in the currents of a cruise ship. Zoom in closer to see muted clownfish. Closer again to Nemo and Marlin upside down with X’s for eyes. Dory coughs up a soy-sauce container from a sushi packet. She remembers who did this. “You damn, dirty humans!” she wails. The End.

Strangely enough, no one thought Pixar would go for it.

Bells chimed again, warning of the end of the intermission. I still hadn’t relieved my bladder for talking. But I’m glad I arrived at the toilets when I did. Just outside them are recycling bins.

At the bins was a thirty-something man with two hands full of rubbish. Even as the second warning signal rang out, he deliberated. Carefully, he took the top off a bottle and took a spoon from a sodden ice-cream tub.

Weighing up his options more carefully than Indiana Jones choosing the real Holy Grail. He selected correctly, and I didn’t mind at all that I nearly peed myself.

During the raffle of expeditions on the seas and magical rash vests, my denial of any such notion as Luck proved true. Its all chance. We breed coincidence in our quest for meaning. I scraped at my internal notions to ignore the fact that I didn’t win.

Adventure is Calling is a four-minute lesson in underwater cinematography. A celebration of the worlds and its creatures that live below the dance of the tide.

“The moments I had during my time diving were often hard to put into words, but with a camera in my hands, all of that changed,” says director Lee Burghard.

Scarlets Tale: Imagine having your leg bitten off by a 4.7m shark. Then imagine utilising that moment as a catalyst for positive, inspiring change.

Achmat Hassiem has no need to imagine these things. After the fateful day in 2006, he’s went on to win Bronze in the Paralympics, swimming for South Africa.

As if that was not enough, he decided to befriend the shark that took his leg, naming her Scarlet. They’ve been friends for 11 years.

Through dramatic recreations and honest interviews, Achmat’s story is immortalised. So too is his passionate spirit to live a full live unhindered by self-pity.

Touched by the Ocean: Gints and Karlis, two friends from Latvia, decide to row 6,000km across the South Atlantic Ocean to catch the opening ceremony of the 2016 Olympic Games in Rio. These men clearly do not want for ambition when we find out that neither has ever rowed on the sea.

The first day sees them row into a glittering sunset sinking into the lapping horizon. The first night is a hilarious symphony of seasickness.

Throughout their intrepid voyage, their levitous characters always find laughter in the dreariest of situations.

A breakout of bloody boils proves their brotherhood. Each squeezing and then dressing the boils of the other, always seeming most prominent on the bum cheeks.

Their jovial outlook is interminable. For thirty minutes, I was on the tiny row boat with them, tasting salt on my lips and feeling appreciative to be witness to their labour of love.

Gints, who turned fifty whilst at sea said, “In this kind of journey you appreciate all of the beautiful moments in your life.”

Not to keep you in suspense, that was when they’d arrived in Brazil, Gints harbouring broken ribs and a sanctity for the sea.

And that was the evening. I felt hopeful. I felt hopeless. A contradiction. Even if we didn’t have climate change deniers for world leaders, would we still have the substance to enact the changes needed?

I was unsure as I made my way through the hoards pouring into the darkness of the packed car park. And then I began to pick up on a conversation between two fathers, children skipping and tugging in tow. It ended with this.

“Shall we do something other than go to the pub next Saturday?”

Change begins on the smallest scale, borne by awareness. Hope is homogenous.

Most of the films I have mentioned will be released via streaming services once the Festival stops touring in November.

Here are some useful websites should any of what I’ve written interest you.