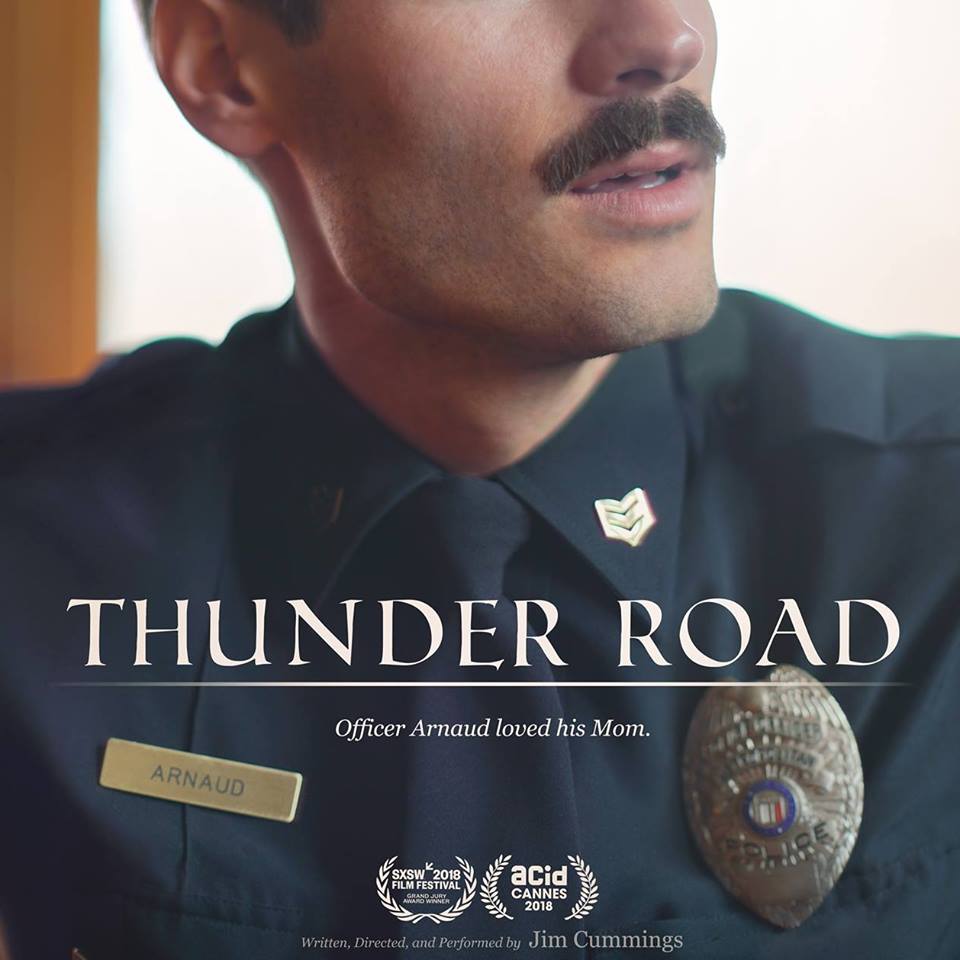 I first saw Thunder Road in Screenwriting class during my first year at University. We were particularly interested in the short film as a form of visual storytelling. Within that one take, I was in awe of the presence of an emotionally erratic man grieving his mother. The one take wasn’t a brash show of choreographed action – though it has its own form of tic-filled movements – but an absorbing portrait of a funeral that the viewer can inhabit for twelve minutes, utterly engrossed in the paint of life.

Thunder Road, the feature-length film, is a continuation of Cumming’s artistry as a writer, director and actor. He’s fully aware of his vision and how to piece it together. This is a tour de force on all counts. A raw scab of a film the viewer can peel off and study with childish curiosity. Through the eclectic array of humane moments – tragic, funny, awkward, weird, hopeless, hopeful – Cummings delivers a character study to dispel archetypal notions of masculinity, grief, mental health and parenthood. The small-town clichés are abundant but the originality in their forming of shape and delivery is honest and surprising.

Following the slightly modified funeral from short to feature, Officer Jim Arnaud (Cummings) immediately missteps in his policing role which leads to him being sent home to grieve. Jim’s own company is as incendiary to his emotional wellbeing as grieving his mother. Jim is presented as a man utterly uncomfortable in his own skin. Being a police officer, a father and a son define who Jim is. Now, that one role is gone forever, his mental devolution and social ineptitude threaten the other two. This only develops further angst for Jim and those whose lives are in contact with his.

His ex-wife, Rosalind’s (Jocelyn DeBoer) acidic demeanour has clearly had an effect on Jim’s daughter Crystal (Kendal Farr). During Crystal’s stay at Jim’s house, she borders on despondent toward her father’s attempts at bonding and communication. When she doesn’t respond to Jim’s “goodnight, I love you,” his pain is our pain. We’ve seen this concept of split-love time and again within Family Drama, but having the child in the position of power is a frightening concept for a man who can’t control his sporadic anxiety masked as misjudged humour.

The film plays out with these episodic vignettes of empathic normality stretch out on a torture rack, Cummings’ trinity of creative input is what lends these scenes so much weight. He understands how to bend the expectations of familial ties to breaking point which, is not the only resemblance Thunder Road has with the melodramatic punches of Kramer vs Kramer. 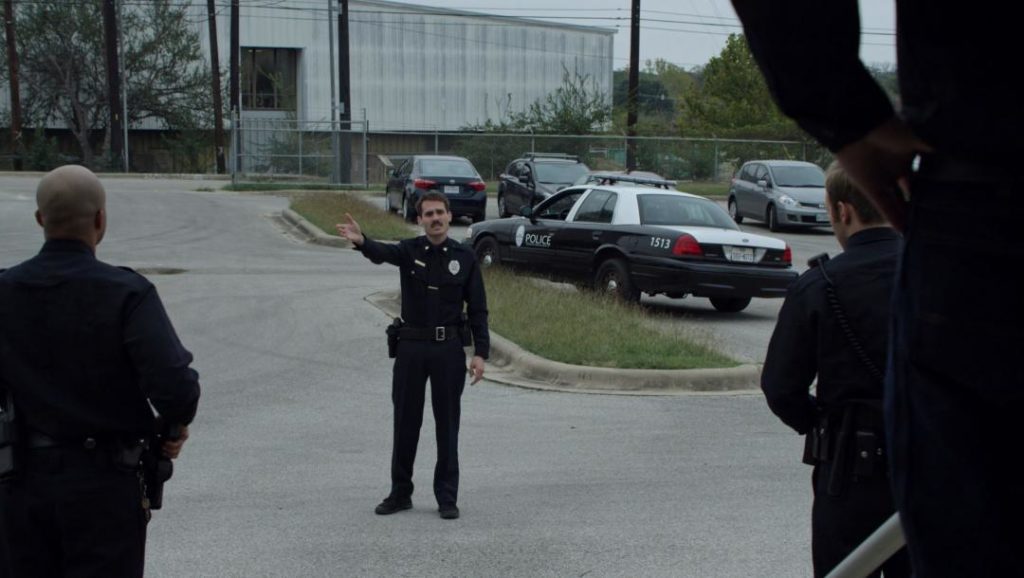 The camera clings to Jim: whether he is dumbfounded at his young daughter’s talk of boobs, cringe-inducing at partner Nate Lewis’s (Nican Robinson) dinner table, or unfathomable in a meeting with Crystal’s worried school teacher. This personal viewpoint doesn’t offer too much in the way of reactions from other characters – though there are small moments of humorous disbelief. There will be repressed laughter and vehement shaking of the head and all of the in-between. Thunder Road can draw out these true-to-life reactions because that’s precisely what it is, true to life.

A quote I hold very dear is from the mind of the spiritual, surreal deity, David Lynch: “Look at life: You can be smiling in the morning and crying in the evening. Cinema (Art) is just beautiful language that helps us articulate these feelings.” It seems Cumming’s holds a similar mantra very dear in his processes. As Thunder Road progresses toward its end that does step a little past the line of unconventional believability, we have shared with Officer Arnaud a tiny slice of his life. His waning hold on mental health and his morose sense of humour present a hero that isn’t super but neither is he a man who is superficial. Try as he does to be what people expect, Arnaud is just a person with myriad flaws coping with life’s clawing demands. As many of us are. When the credits rolled, I couldn’t help but feel a deep introspection of how I deal with difficulty and, a deeper appreciation of a new filmmaking talent. It all sounds like profuse hyperbole, especially in a time when everything is awesome, but Thunder Road delivers on its short film promise. Cummings medical precision in understanding the human psyche is matched with a buoyant artistic nobility to present it in fine strokes.