Watch: The lovely funny Christmas video that we all need right now

When Gareth Evans decided to get into the Christmas spirit he roped in his two step-daugters to record a video that can’t help put a smile on your face.

And let’s be honest, we all need cheering up right now, with the global pandemic bringing uncertainty to all our lives this Christmas.

To alleviate the gloom, Gareth, a music teacher from Cardiff, decided to record a fun version of Slade’s classic ‘Merry Christmas Everybody’ with two little helpers, to put a smile on the face of friends and family – and have a lovely memento of a special and unique time to look back on.

“I was on dad duties for the day as their mum (Abbey) was working,” he said. “I wanted to do something fun and special with them but also something we’d look back on and laugh at in years to come. Also I thought Abbey would really appreciate it from work.

“I’m a music teacher and ‘Merry Christmas Everybody’ is something I’ve been learning with a few of my pupils leading up to Christmas. It’s a song that everybody knows and loves but I’ve never really learned it to play, so I thought it’d be a fun one to sing with the girls.” 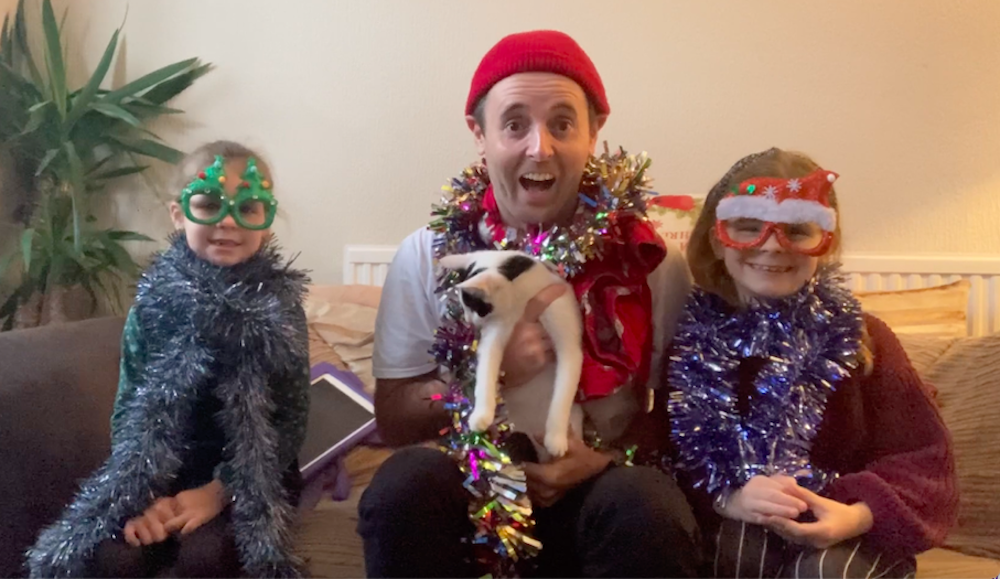 Thankfully step-daughters, Georgie, 6, and Ruby, 8, couldn’t have been more enthusiastic.

“They were more into it than I was in the end,” laughed Gareth. “We lead quite a funny existence at home and out and about as a family. They’re both hilarious and love acting up for the camera. I often make little edits to music of our video clips from days out and things like that. Also they’re both proper little performers, Georgie is a fantastic gymnast and Ruby is thriving in dance classes.

“Hopefully the video speaks for itself. They loved it. We filmed the start and the finish first, for continuity, then had a little break before doing the song. They were both nagging me to get it done.”

After a couple of rehearsals the trio belted out the Christmas classic – much to the joy of their mum.

“She loves it, though I think she’s secretly glad she was in work, otherwise she’d have been roped into it too,” said Gareth. “Unlike the girls Abbey isn’t such a fan of the camera.”

After posting the video on Facebook, the music teacher has been inundated with likes and shares.

“We’re really happy that so many of our family and friends have enjoyed it,” said Gareth. “I really didn’t think of it on any level other than just messing about with Ruby and Georgie as a surprise for Abbey. But to hear that it’s made people smile is wonderful.”

We’ll sure you’ll agree it’s just the tonic and a reminder of the innocence and fun side of Christmas for children and their families.