Watch: The stunning version of Yma o Hyd that could be heard from miles away

This is the incredible sound of Dafydd Iwan belting out Yma o Hyd at the National Eisteddfod in Tregaron.

The video was filmed by Arddun Rhiannon as the singing legend performed a rousing version of his classic song.

Posting a video on Twitter with the words ‘Neges glir o Dregaron heno’ (A clear message from Tregaron tonight), it shows the Eisteddfod ground filmed from a distance on Sunday evening as thousands of voices can be heard joining Dafydd Iwan in a spine-tingling version of the song that has been adopted by Wales football fans.

This is the video from afar…

This is the whole song as filmed by S4C…

Dafydd Iwan’s memorable appearance at the Eisteddfod comes after his recent announcement of two special concerts at The Soar Theatre in Merthyr.

The folk hero who is synonymous with everything that is positive about Wales right now will play shows at the theatre on Friday, September 30 and Saturday, October 1.

Dafydd won the hearts of Welsh football fans with his stirring performance of ‘Yma o Hyd’ at Cardiff City Stadium – with pictures broadcast worldwide of him soaked to the bone by the Welsh rain and his own tears, bellowing out his iconic anthem with backing vocals from the Red Wall and Gareth Bale and co, as the team qualified for the World Cup for the first time in 64 years.

The resurrection of ‘Yma o Hyd’ – about the Welsh people and the Welsh language, has reinvigorated a nation.

The Red Wall belting out ‘Er gwaetha pawb a phopeth, Ry’n ni yma o hyd’ (‘Despite everyone and everything, we are still here’) is something that Dafydd still can’t quite believe is happening. 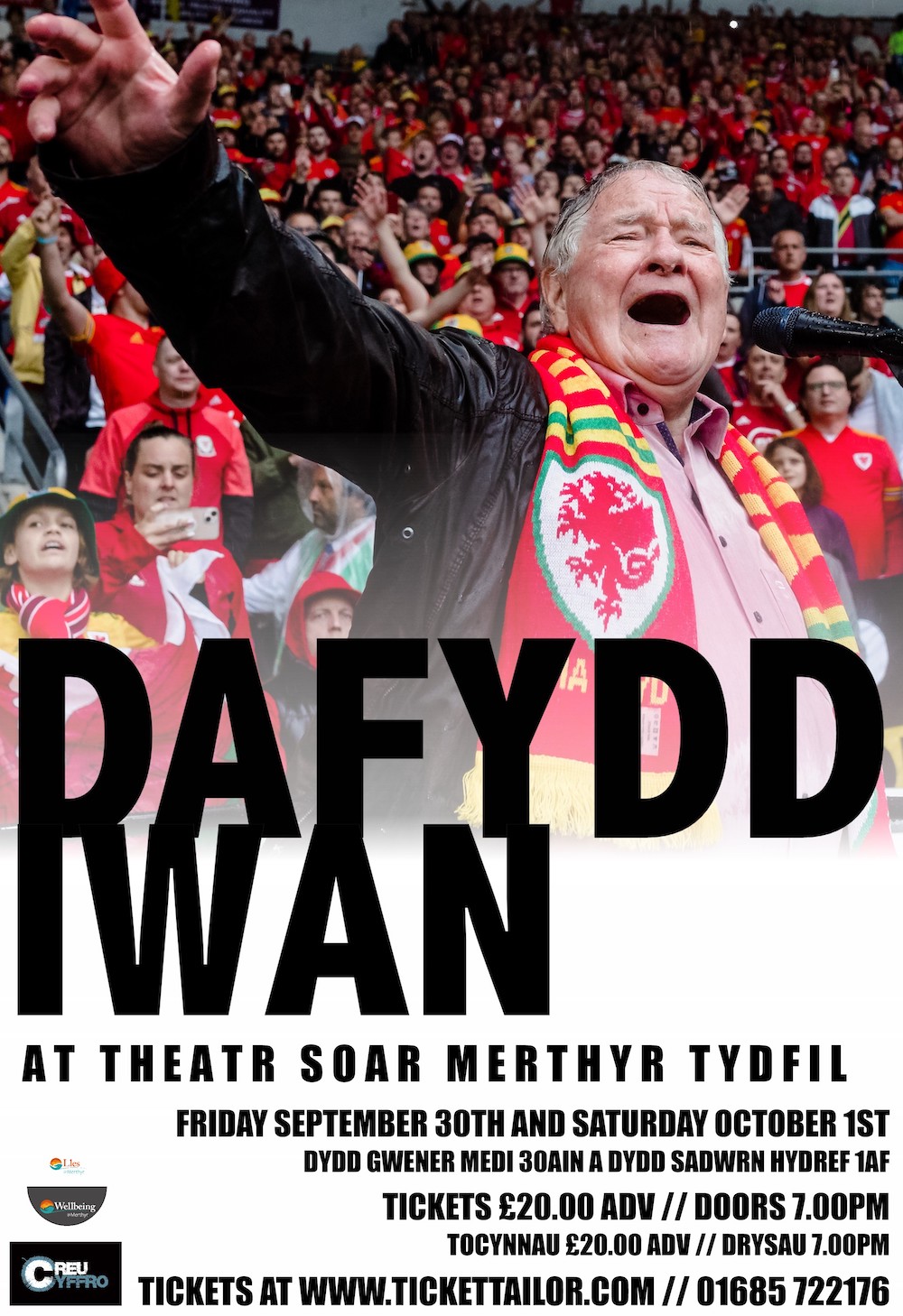 “I never thought in a million years that 40 years later, Yma o Hyd would have the effect it has,” he said.

“I only ever thought about my next concert. I wrote the song and a few others for a tour we did with (the band) Ar Log.

“It was written deliberately to raise spirits to finish off the night at shows after the 1979 referendum (Welsh devolution referendum) that had failed miserably.

“Ar Log arranged and produced the record, so although I wrote the words and music, their arrangement is the one that caught on.”

Reaching number one in the iTunes Chart have a campaign by Welsh football fans, Dafydd believes what the fans and the Football Association of Wales have created is something unique and to be cherished – and now he’s looking forward to playing these special shows to celebrate what has been an incredible year so far.

“I would like to see as many fans as possible at these two concerts in Merthyr to enjoy the recent success and celebrate Yma o Hyd reaching number one,” he said. “Concerts in the Valleys are always very special, and I will look forward to seeing as many old and new friends at the Soar Theatre in Merthyr.”

Tickets are on sale now via the box office on 01685 722176 or via www.theatrsoar.cymru and www.tickettailor.com

Yma o Hyd reignited my inner Cymro! First heard years ago on cwtch.com, puzzled by this Cymraeg language I explored and learned >I AM CYMRO!<

Watching the S4C clip, Dafydd must get such a buzz playing in front of a crowed like that, so powerful, da iawn.

Is that the same bloke who played Harold Bishop on neighbours?