Wales has a promising game industry and is currently the home of many small indie game studios.

Videogames as a whole in the UK have a large market value estimated at £7 billion in 2020.

Popular culture has recently brought us fictional languages such as Klingon, favoured by Star Trek fans, whilst TV blockbuster Game of Thrones brought another fictional language, Valyrian, to the masses. The potential to reach millions with a real living language is an exciting prospect for the videogame industry.

Literature Wales is currently developing new video game content based on Welsh myths and legends that brings The Land of Legends into the real world with research being undertaken to create a fantasy and mythology adventure game.

“We surveyed over 800 respondents from the UK, Japan, Germany, and the USA and identified that there was a strong interest in content matching those of Welsh myths and legends.

“We also found that there was a surprisingly high awareness of key Welsh myths and legends, although the association of these with Wales was almost non-existent.

“We’re currently exploring various avenues of how we can capitalise on the opportunities identified by this research and to build on the work already undertaken in creating the Land of Legends website.

“This will increase international engagement with Wales’ literary culture, building a distinctively Welsh brand of video game content inspired or adapted from our literary heritage. It will also allow us as an arts organisation to reach new and wider audiences.”

Maid of Sker is a recent commercial success, developed in Wales, that has received industry recognition and awards.

It is a horror game inspired by Welsh folklore that has been downloaded over a million times. It has been awarded a TIGA Heritage Award, the equivalent of a game industry “Oscar”.

The game features reinventions of songs such as Calon Lân (A Pure Heart), Suo-Gân (Welsh Lullaby) and Ar Hyd Y Nos (All Through the Night) by Welsh artist Tia Kalmaru.

The recent blockbuster game, Assassins Creed: Valhalla, a historical adventure series set during the Viking Invasion, demonstrated the variety of languages that were spoken across the British Isles at the time of the invasion, including Welsh.

The international game studio Ubisoft consulted experts from the National Library of Wales to recreate middle and old Welsh, to recreate how Welsh was most likely spoken at the time directly from real-life scholarship.

As big game studios show more interest in Welsh language and culture, they are paving the way for indie game studios within Wales to make their own mark in the creative world of Videogames.

The promotion of Welsh culture within the game industry has the potential to introduce the Welsh language and culture to new international audiences, potentially inspiring millions of learners across the way.

Valhalla is based between the years 872-878 AD, at this time the Welsh dragon looked considerably different to modern version, many depictions showed our dragon with only two legs and others having two heads, one thing is of note, many articles claim that it was the Romans that brought over the depiction of the dragon, this is simply not the case, it was already being used here at least 1000BC 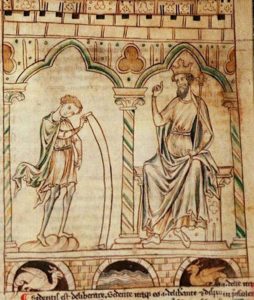 Do you have any sources about the ancestry of the dragon?

Welsh myths & legends invented the fantasy genre as we know it. All the great writers from J RR. Tolkien. CS Lewis. Terry Pratchett etc… were influenced, and they in turn influenced writers JK. Rowling. George RR. Martin and so on…. I’m aware in Japan there is a popular RPG game called the Mabinogi, and know of other games that used the Welsh language as Elfish. Welsh mythology is ripe for the picking. Most would be staggered to know how much mythology originated from Wales itself and Welsh sources that retold events & history that occured in other Welsh Kingdoms… Read more »