The shortlist for this year’s Welsh Music Prize has been announced, with 15 artists in the running for the prestigious award.

Supported by Creative Wales, Welsh Music Prize is an annual award celebrating the best new music created in Wales, by musicians from Wales.

Previous winners include Gruff Rhys, Gwenno and Boy Azooga win, and last year’s award was given to Inner Song by Kelly Lee Owens, from Flintshire.

The shortlisted albums have been whittled down from a longlist of 130 albums by the Welsh Music Prize jurors, with judges now having the task of choosing one of the 15 nominated albums for the coveted prize, and the £10,000 award.

The 2022 winner will follow in a long succession of artists and albums which have gone on to national and international success. Last year’s winning album, Inner Song by Kelly Lee Owens explored the personal pain of her own struggles, while embracing the beauty of the natural world.

Owens was the first recipient of the £10,000 prize, which as well as supporting her musical work, has funded charitable activity in her home of North Wales.

She has also released the theme song for next year’s FIFA Women’s World Cup.

This years’ awards ceremony at Wales Millennium Centre will be hosted by BBC Radio 1 presenter Sian Eleri. For the very first time, the event will welcome a live public audience as part of Llais, Cardiff’s flagship international arts festival, and include performances by some of the shortlisted performers.

The three winners – Aderyn, Minas and Sage Todz – will receive a £5,000 financial award to assist their careers.

The Triskel Awards are given to three artists who judges believe offer a bright future for music in Wales. This year, the charity has expanded its support for the emerging Welsh talent with one-to-one application writing support and tailored business skills guidance with music industry experts, reinforcing their long-term career plans.

Broadcaster Huw Stephens said: “This year’s shortlist is a great collection of albums, a huge congratulations to all the shortlisted artists. We are very happy that Creative Wales are supporting the Prize again this year, and it’s exciting to be part of Llais at the Wales Millennium Centre.

“Creativity in Wales doesn’t stop; music is at the beating heart of Wales and it’s great to see another excellent selection of albums highlighted this year.”

Deputy Minister for Arts and Sport, Dawn Bowden, said: “I’m delighted that Creative Wales is supporting the Welsh Music Prize for the fourth year. The shortlist reflects the diversity of genres and artists making such exciting music in Wales today.

“The Welsh Music Prize is a celebration and recognition of excellence and creativity in Welsh Music – and I’d like to congratulate all those shortlisted and we look forward to the winner being revealed later this month.”

The Welsh Music 2022 finalists are:

Four years after Carmarthen band Adwaith’s first album release, the band has now returned with their much-anticipated record ‘Bato Mato’. Taking its name from their trusty guide while aboard the Trans-Siberian Express, the album possesses a seemingly cosmic connection to their journey across the frozen outer-reaches of Russia; an allegory for the sonic character of its material, while foreshadowing the glimpses of isolation upon their return home.

Art School Girlfriend – Is It Light Where You Are (Fiction)
‘Is It Light Where You Are’ is the debut album from Art School Girlfriend, moniker of Wrexham producer, multi-instrumental musician and songwriter Polly Mackey. Mostly written over a two-week period of 14-hour solo studio sessions, the bulk of her album is torn straight from a journal kept throughout 2019, chronicling the end of a US tour, the tumultuous ending of a six-year relationship and Mackey’s journey back to London from Margate, where she lived and co-owned a book shop with her then girlfriend.

Bryde – Still (Easy Life Records)
Sarah Howells from Pembrokeshire is Bryde, and this is her second WMP nomination. Still is an album about the different kinds of love as hinted at in the bracketed song titles. As Sarah explains, “So many lovesongs glorify the idea of throwing yourself at someone, the drama, and the pain of love. I wanted to own up to doing that but acknowledge that there are many other healthier ways to think about love and then start a conversation about it.” 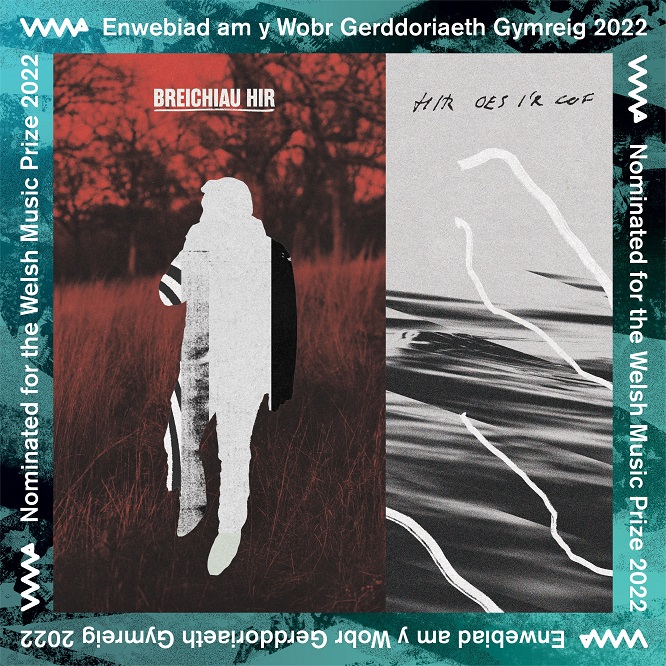 Breichiau Hir – Hir Oes I’r Cof (Libertino Records)
Breichiau Hir’s debut album is a nostalgic exploration of growing up in an ever-changing city and losing touch with reality and yourself through nostalgia. The Cardiff six-piece blend cathartic intensity, enormous walls of sound and fragile melancholic moments with a sole mission to move and connect to their audience. They tackle hard-hitting themes with poignant lyrics, self-deprecating humour, and surreal wordplay in their native Welsh language.

Buzzard Buzzard Buzzard – Backhand Deals (Communion)
With Backhand Deals, Buzzard Buzzard Buzzard are ripping up the rule book. A rejection of rock music’s more archaic ideals, their debut album plunges into Tom Rees’ exploration of honesty and authenticity and untangles what it means to be a ‘rock star’. The key to this demystification is Rees’ sharp wit – using sarcasm and humour to keep the listener in limbo, and in turn, leading their audience to face their own thoughts.

Cate Le Bon – Pompeii (Mexican Summer)
Pompeii is Cate Le Bon’s sixth full length studio album and follow up to her 2019 album, Reward. This album was created in the depths of the Covid-19 pandemic and as a result this album is a much more introspective record. In this album Le Bon collages the saxophones and bass grooves of Pompeii into a heady harmonic mix of psychedelia and pop, awe and bewilderment.  From Newcastle Emlyn originally, Cate was based in Cardiff for years, and now lives in Joshua Tree, Los Angeles, USA.

Carwyn Ellis & Rio 18 and The National Orchestra of Wales – Yn Rio (Legere Recordings)
Yn Rio is very much another chapter in Carwyn’s continuing Latin American musical journey. However, on this release Carwyn Ellis has teamed up with the BBC National Orchestra Of Wales to provide beautiful orchestral accompaniment to his collection of Welsh language songs which draw on the Latin American musical flavours of Bossa Nova, Cumbia, Samba and Tropicalismo. Starting as a project for BBC Radio Cymru, the album was performed live at live years’ Green Man Festival.

Dead Method – Future Femme (Future Femme Records)
Produced by Edward Russell (Inside The Groove), the album is a reinvention of Dead Method’s signature witty pop motif that explores his experiences as an LGBTQ+ artist. Dead Method is a pop star for the new age, whose music plunges deep into the depths of alternative electro pop with a dark edge as he explores life itself.

Danielle Lewis – Dreaming In Slow Motion (Red Robin Records)
Originally hailing from the West coast of Wales, Danielle Lewis emerges with her stunning album ‘Dreaming in Slow Motion’. With compositions of the spectral to the serene, underpinned by her singular, saintly vocal stylistics; Lewis’ evocatively titled debut collectively offer a collage of her life as she navigated her early adulthood. 10 songs of breath-taking tenderness and ethereal presence that pioneer between the realms of dream and reality.

Don Leisure – Shaboo Strikes Back (First World Records)
Cardiff producer Don Leisure has evolved considerably in the decade or so he’s been releasing music. ‘Shaboo Strikes Back’ is a follow on from the first ‘Shaboo’ album which documented the road trip of Don’s youth – featuring hip hop music interspersed with Asian radio station jingles of old, dedicated to Bollywood actor, Nasser ‘Shaboo’ Bharwani – Don Leisure’s late uncle. The album was a favourite of Lauren Laverne on BBC 6 Music.

Gwenno – Tresor (Heavenly Recordings)
Tresor is Gwenno Saunders’ third full length solo album and the second almost entirely in Cornish (Kernewek). Written in St.Ives, Cornwall , just prior to the Covid lockdowns of 2020 and completed in Cardiff during the pandemic along with her producer and musical collaborator, Rhys Edwards, Tresor reveals an introspective focus on home and self, a prescient work echoing the isolation and retreat that has been a central, global shared experience over the past two years. Tresor is also nominated for this years’ Mercury Music Prize.

L E M F R E C K – The Pursuit (Noctown)
Newport rapper L E M F R E CK’s ‘The Pursuit’ is about the pursuit of love, happiness and community in their broadest forms. He is one of the most exciting artists on the scene. As L E M F R E C K explains, “The year I started writing was a horrendous one for myself and community. A pandemic that showed how little we were loved. Protests that made us confront our past. And from that I realised how little I loved myself. ‘The Pursuit’ explores what happens when you are in a constant chase for things that you don’t necessarily know want you back.”

Manic Street Preachers – The Ultra Vivid Lament (Sony Music)
‘The Ultra Vivid Lament’ is the Manics 14th studio album and entered the UK charts at No. 1 on its release in September 21.  It’s eleven tracks perfectly marry introspection, quiet rage and sublime, irresistible tunes, and were recorded at Rockfield in Monmouth and the bands’ Door to the River studio in Newport.  The Sunday Times said “…the new album is prime pop Manics: killer choruses, with unapologetically literate songwriting that plugs you straight into the emotional mains”. The Blackwood band’s album also features the late Mark Lanegan.

Papur Wal – Amser Mynd Adra (Libertino Records)
With members from Ynys Mon, Caernarfon and Cardiff, Papur Wal’s debut album was the culmination of years of gigging and releasing melodic indie singles. One of the busiest bands on the Welsh language scene, it earned them a nomination for Welsh Language Album of the Year.

Sywel Nyw – Deuddeg (LWCUS T)
Sywel Nyw is Bangor musician Lewys Wyn. Deuddeg won the Welsh Language Album of the Year at this year’s National Eisteddfod in Tregaron, and is a collaborative album. Featured vocalists include Dionne Bennett, Mark Robers, Lauren Connelly and Endaf Emlyn. According to Lewys, the project was a way of creating music outside the “formulaic” and “monotonous” album process, whilst simultaneously tapping into Wales’ diverse music scene with the album featuring both established and upcoming Welsh artists from far reaching genres.

Recipients of the Triskel Awards are:

Aderyn
An indie pop singer from Senni Bridge, Brecon Beacons, Aderyn has released a handful of shimmering singles to date. Starting as a drummer in a grunge band, her honest, up-front lyrics matched with slamming punky pop creates something very special.

Minas
Born in Athens, Greece and growing up in Wales from a young age, producer and rapper Minas has made an impressive name for himself on the Welsh scene. Personal struggles and mental health are forefront in his lyrics. Ferocious live, his work as producer with ither artists is highly regarded.

Sage Todz
Rapper Sage Todz is from Penygroes originally, lived in London and is soon moving home to Wales, to Cardiff. A rap, hip hop and R’n’B artist, his unique bilingual lyrics caught the attention of FAW who asked him to collaborate on a song for the Wales World Cup qualifiers.

Tickets for the event can be purchased here:

Papur Wal, Adwaith & Gwenno for me!!!

Definitely living in a golden age for music, in Wales and beyond. Looking forward to Sŵn in a couple of weeks time where a few of these are playing.

Gutted My Name Is Ian never get nominated for this every year. They release an album a year on average and are very popular in Cardiff. Their Spotify listen counts tell you enough.