‘We’re not scared of you – we’re Welsh!’ The day 60ft Dolls took on The Sex Pistols

At the height of their powers when Cymru was cool and Catatonia, Super Furry Animals, Gorky’s Zygotic Mynci and Stereophonics were the bands du jour, 60ft Dolls led the charge of the fight brigade straight out of ‘the new Seattle’, as Newport was infamously dubbed by US music journalist Neill Strauss.

It took the combustible trio, whose live shows were as incendiary as their antics off stage, to many places but none so memorable as the day they supported The Sex Pistols at the punk demi-gods’ hugely anticipated reunion gig at Finsbry Park in London.

Part of the aptly titled ‘Filthy Lucre Tour’, given the Pistols unashamedly admitted that’s exactly why they had reformed – to take the money and run, it came 18 years after the band collapsed in disarray in the US playing their final gig at The Winterland Ballroom in San Francisco, on January 14 , 1978.

Then, with Jonny Rotten’s final words from the stage – “Ever get the feeling you’ve been cheated?.” – ringing in the ears of those punters who had witnessed the final curtain call of punk, the most infamous of bands exited the stage.

The Sex Pistols’ resurrection, announced in a chaotic press conference at the 100 Club in London, would take place in a park in North London on June 23, 1996.

After two warm-up shows in Finland and Germany, many weren’t sure if the Pistols would even turn up, let alone put on a show.

Meanwhile, a Welsh band built in the Pistols’ image were putting the finishing touches to the breakneck punk, soul and rock ‘n’ roll that would constitute their mighty debut album The Big 3 to be released later that year.

An underdog’s opus it coursed with manic thrills, surged with breakneck riffs and served up cracked kitchen sink tales – shots of pure adrenaline like carousing singles Stay, Talk To Me and Happy Shopper.

Sharing a love of American bands like Dinosaur Jr and Pavement, they lashed together classic British influences – creating a transatlantic musical Molotov cocktail

You couldn’t get away from the fact that they loved The Stones, The Beatles, The Who, The Pistols and The Jam, but were also in thrall of those Yank noiseniks.

The way 60ft Dolls got the call to support The Sex Pistols bears all the hallmarks of the larger-than-live they cultivated for themselves in their brief but beautifully belligerent period they were together.

“We got the gig because (Pistols’ drummer) Paul Cook saw us play in Los Angeles at a club and insisted we were on the bill,” recalls Dolls’ sticksman Carl Bevan. “Apparently there were several members of the cast of Baywatch at that gig too, but strangely we didn’t get the call for that one.”

Carl, who now lives in Cardiff and is a professional artist, remembers the days leading up to the Finsbury Park gig and the sense of uncertainty that surrounded it.

“I remember the build up to that gig in the press,” he says. “The Pistols did a very good job of keeping people guessing.

“Nobody knew if it was all just a big scam. We just want your money. They called it ‘The Filthy Lucre Tour’. They milked it.

“On the day of the gig people genuinely had no idea why they were even doing it and no clue if it was just going to be a few shambolic half arsed songs and them walking off stage to “you’ve been swindled”.

Part of a supporting bill that was to run from midday until The Pistols were due to take the stage later that evening – 60ft Dolls in a late afternoon slot, joined a line-up that included Goldblade, 3 Colours Red, Fluffy, Stiff Little Fingers, The Buzzcocks, Skunk Anansie, The Wildhearts and Iggy Pop.

Backstage A list actors, models, and musicians mingled – Kate Moss, Johnny Depp and the Gallagher brothers savouring the return of the punk overlords.

Carl recounts how Mike tried to approach John Lydon for a chat.

“The closest we got to them was early on in the day,” he remembers. “Mike saw Lydon walking towards him with a minder.

For us fans of the Dolls there was much joy when a rare recording of the band’s set supporting the Pistols recently emerged on YouTube.

It shows the band at their fiery best and the gravel-voiced frontman of the apocalypse riding hellraisers, Richard Parfitt, in a punchy, punkish mood when interviewed alongside Dolls’ bass player Mike Cole by Radio 1’s Steve Lamacq.

The singer informed the DJ how they exploited The Sex Pistols only doing the gig to play to a bigger audience and get more money, while doing his best to antagonise the Pistols’ audience by proclaiming ‘we’re not scared of you lot, we’re Welsh.”

“Our set had been initially met with some interesting missiles,” laughs Carl. “A traffic cone and a lemon, if I remember rightly.

“We channeled that adrenaline fight or flight response into finding our top gear I think. We won the room, or the park, by the end of the set.”

The drummer recalls how the Dolls had been met by many hostile crowds during a career that burned briefly but brilliantly. 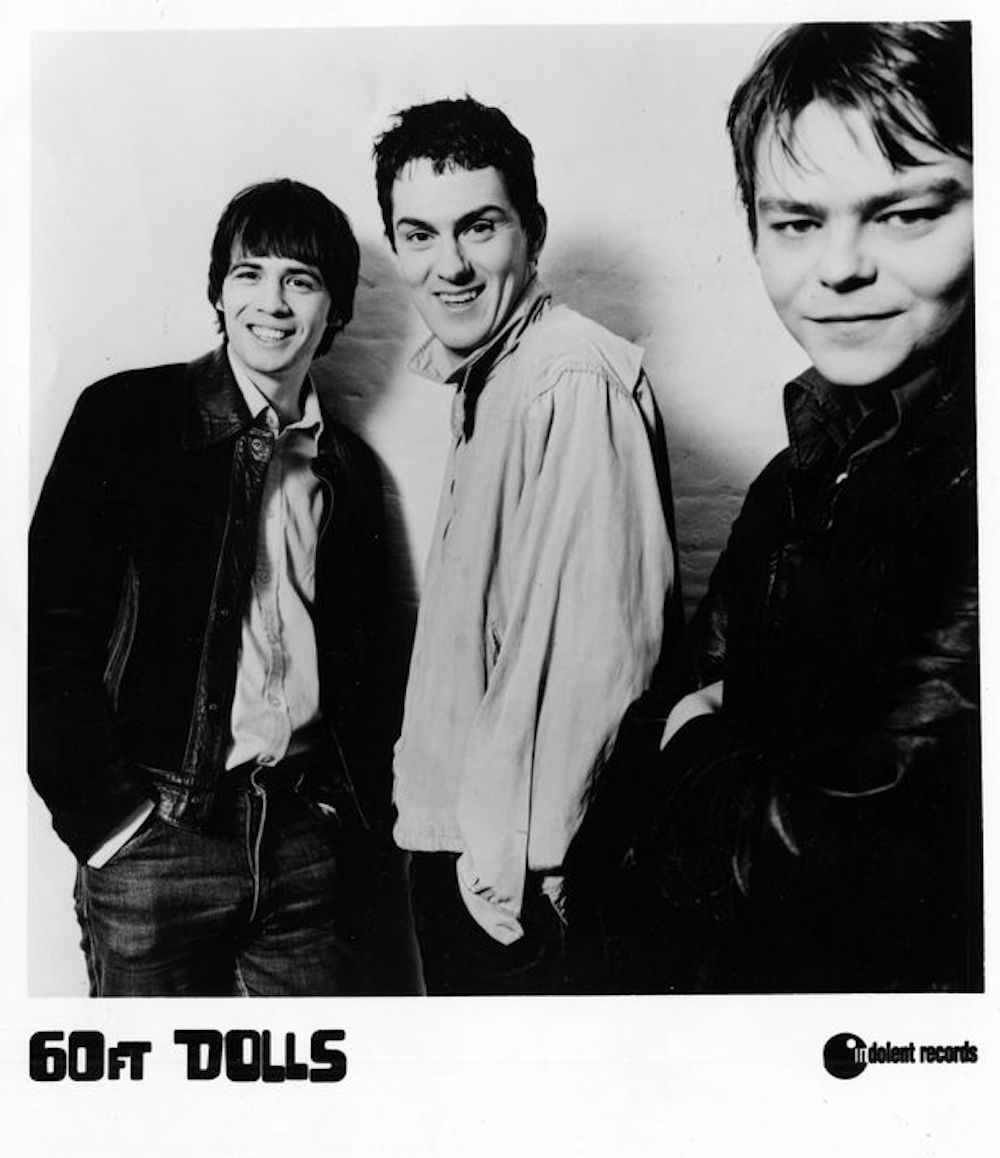 “We had seen plenty of indifferent or hostile crowds plenty of times before,” says Carl. “Playing weird little gigs in America. We played Prince’s club in Minneapolis which was a particularly hostile vibe which we managed to turn around by tapping into that chaotic energy we could conjure up, but also bringing everyone along with us.

“I have heard recordings of us before but that YouTube recording sounds like we found fifth gear. I reckon Rich definitely cranked up his guitar sound. It sounds filth! We were playing by the seat of our pants. You can hear it. Best live recording of us I have ever heard

“Saying this it was great to get it over and knowing we had pulled it off. It’s a great feeling playing a festival type line up when you know your work is done and done well and you can get on with some serious irresponsible hedonism, which we were also quite good at.”

As for The Sex Pistols set, Carl recalls that he was surprised at just how good they were. Perversely, they were introduced by England footballers Stuart Pearce, a huge punk fan, and a bemused Gareth Southgate. This was during Euro 96 – and a week before Southgate would join Pearce as a famous penalty flop in a shootout against Germany in the Euro 96 semi-final.

“I watched the gig from out front,” remembers the drummer. “The anticipation was intense from the 30,000 aging punks. When the moment came for the Pistols to take to the stage, they smashed through this curtain in front of the stage (mocked up as a newspaper frontpage featuring Pistols’ headlines).

“Lydon said something sneary in perfect character. They started playing ‘Bodies’. Oh man. That first couple of minutes was a rabbit in the headlights moment for everybody watching what was unfolding in front of them.

“By the time the third verse kicked in. It was obvious that we were in for a good, hard, beautiful shoeing.

“This was a band that had actually been rehearsing their tits off for months. It was bone crunching, troglodyte, primal power. They were a fine tuned machine, not in a polished, slick way but a swaggering brutal face-melting woolly mammoth, ploughing through Finsbury Park wearing razor blade leg warmers.

“They basically played the whole of Never Mind The Bollocks. It was probably the best band I have seen in my life. I look back on that day as one of the best days of my life without a doubt. It’s one of the things the Dolls did that I am most proud of.”

Carl Bevan has joined forces with I Loves The ‘Diff to produce a 2022 calendar featuring his paintings of landmarks in the Welsh capital.

Worked a gig with them in Gloucester where their roadies did a couple of numbers for the sound check.
Enjoyed them much more because the roadies were The Pooh Sticks. All good people though. Did Mogwai a couple of weeks earlier and they wouldn’t stop skateboarding around the sprung dancefloor, good days.