Yma o Hyd: How a Welsh language community hub survived and thrived in a decade of challenges

Saith Seren celebrates its 10th birthday as Wrexham’s Welsh centre at the end of this month.

That bald statement hides a rollercoaster decade of work and commitment from volunteers who came together to open the centre in the old Seven Stars pub on Chester Street in the town centre.

The community cooperative behind the venture – Canolfan Gymraeg Wrecsam – was formed to provide a focus for Welsh speakers and learners in the town, the largest in the North.

From the outset it succeeded in attracting many adult learners, who set up their own “Clwb Clebran” group to meet in the bar for informal learning sessions.

Saith Seren has always been a venue for live events – whether music, poetry, drama or comedy as well as hosting darts teams and a weekly jam night. It’s also hosted events to celebrate Black History Month and works with the local Portuguese community. Rooms above are hired out to local community groups, ensuring that the centre is a busy hub.

‘Without the usual grant funding’

All this has been achieved without the usual grant funding. When the centre faced a financial crisis five years ago and looked like it would be forced to shut down more than 200 people throughout Wales and beyond came forward and started to pay towards the centre’s rent. The building is leased from a housing association.

The pub itself – a beautiful Ruabon red-brick building in the Arts and Crafts style – has a longer history.

A pub has stood on the site for at least 200 years but this particular building was re-built in 1898 by Liverpool Welsh architect Thomas Price. Notable features include the turret on the corner and the colourful mural on the gable.

The publican was a colourful character John Scott, who also ran the Empire Music Hall next door (now derelict) and reputedly had the first electric lights in Wrexham.

The modern-day Saith Seren is run by a group of volunteers headed by Chris Evans, the chair of the board. Along with treasurer Steve Kynaston and bar manager Nia Jones, who started work there a decade ago as the cleaner, they have helped steer Saith Seren through its first decade.

It’s been achieved without grant funding – Covid recovery grants excepted – and has outlived some Welsh centres that were lavished with cash in the past decade.

No business plan concocted in 2012 made provision for a cracked sewage pipe (that closed the building for a week but lay undiagnosed for weeks), a rooftop occupation on a nearby solicitors’ office (again, bar closed for a busy weekend), some strange decisions on funding Welsh centres and of course the last two years of Covid uncertainty.

The centre’s motto is aptly “Yma o Hyd” because sometimes surviving is a success story.

Unfortunate typo in the paragraph headed ‘without the usual grant funding’…. 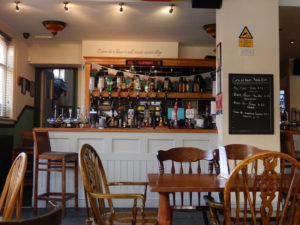 They had Elin Fflur there just before covid turned up. The atmos whenever there’s a Welsh band, pub quiz, or Welsh Christmas event is fantastic.