Most children would need to attend Welsh-medium primary schools by 2030 if the government is to stand a chance of reaching its target of a million speakers by 2050, according to new research.

They found that 19 out of the 22 councils in Wales would need to ensure that most of the youngest children are in Welsh-medium education within just over twenty years.

And, by 2040, the research claims that over three quarters of seven-year-olds will need to be in Welsh-medium education if the government target of a million speakers by the middle of the century is to be met.

Toni Schiavone, campaign group Cymdeithas yr Iaith’s education spokesperson, said that the statistics showed that the government would need to move more quickly if they were serious about meeting the target.

“Because of the optimistic assumptions behind the research, these targets are the absolute minimum one could possibly set in order to reach the million speakers target,” he said.

“Indeed, there’s a strong argument that one needs to move more quickly and further.

“In the short term, one of the most important milestones for the government is ensuring that more and more teachers are trained to teach through the medium of Welsh.

“However, we are yet to see the transformative changes that are by now urgently needed.”

In Bridgend, site of the Urdd Eisteddfod this year, the statistics suggests that the percentage of seven-year-old kids taught through Welsh would need to more than treble, from 8.6% to 28.6%, by 2030.

In Conwy and Denbighshire the local authorities would need to boost provision from around a quarter of children attending Welsh-medium education to almost 60% in just over a decade.

The report comes as the former Assembly Member Aled Roberts conducts an inquiry of Welsh in Education Strategic Plans – which outline how county councils plan to grow Welsh-medium provision – for the Welsh Government. 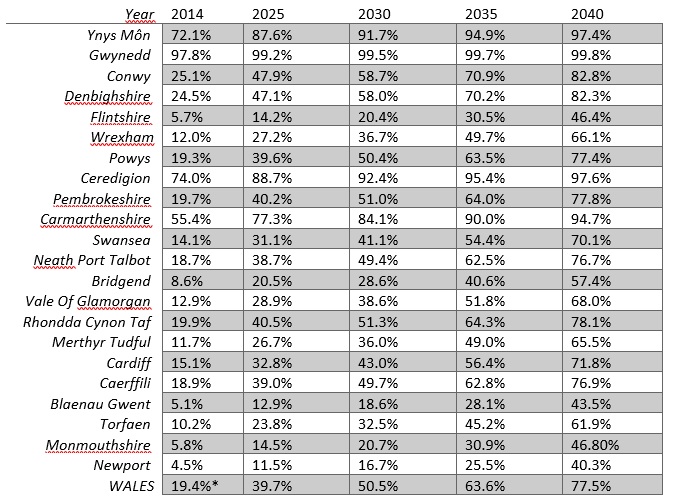 Toni Schiavone said that increasing the number of children in Welsh-medium education would be only one of a package of measures the government would need to implement to reach the target.

“As well as action in education, measures are needed to stem out-migration, especially of young people, as well as normalising the use of the language in every part of people’s lives,” he said.

“Our local members have responded to and scrutinised local Welsh-medium education plans: they are insufficient to say the least.

“The Government must consider a system which sets targets for local authorities which include a minimum of Welsh-medium provision.

“We believe that the system should force local authorities to plan how they will deliver on those targets in order to create the million Welsh speakers nationally.”

If councils are going to be given hard targets then the only fair and realistic one must be 100%, at primary level at least.

The reality then would be a massive shortage of teaching staff able to teach in schools as they became Welsh medium. Perhaps all teaching courses in Wales need intensive Welsh learning as a core part of the course, which would of course in itself further boost the numbers of Welsh speakers in Wales.

It’s doable, but will require a combination of the carrot and the stick.

Why was Conwy allowed to be so English only medium? Only 100 years you could still find many Welsh only speakers in Conwy and Llandudno resort etc

Another good piece! I totally agree with the sentiments of the previous comment. The best way to ensure Cymraeg once again becomes our first language, irrespective of what other languages people speak is to remove English as the first, starting now! All children starting pre or primary school will be taught in Cymraeg therefore and gradually successive generations will naturally have Cymraeg as their first language. Accepting this may prove difficult for those children who have been taught in English and are not already Cymraeg speaking classes should be bilingual or in English until they leave school. The only way… Read more »

It would take incredible bravery to simply say “All new schools are Welsh medium”. Existing Welsh schools already have a robust programme for integrating children who begin with no Welsh so the hurdle is not the process of teaching – it’s the scalability of that programme and a hearts-and-minds as regards panicing parents.

You only have to look at Llangennech to see how toxic the pushback is likely to be.

Good point Leia, I wonder has anyone studied this toxic pushback that occurred in Llangennech? Who were those involved. There is no need for panicing parents if the Senedd is strong and states this is the way it will be, bearing in mind non-Cymraeg speaking parents are not going to be isolated as everyone speaks English anyway. Due to the poor reporting on this sad event of introducing what we as a people want, it was very difficult to read between the sensationalism, especially at a distance. It would be interesting to see if anyone has carried out a survey… Read more »