The Welsh music world is in mourning today after the death of musician Richard Jones, aged 65.

It comes just a month after the death of his brother and fellow member of the much loved punk group, Ail Symudiad.

The brothers founded the group in Cardigan in 1978 releasing a number of records over 40 years, while building up a loyal audience.

They also set up independent record label and a recording studio in the town.

Richard was lead singer for the band and played guitar while Wyn, who died of cancer in June, played bass.

Ail Symudiad were a pioneering band and one of the first from the area to play punk rock. 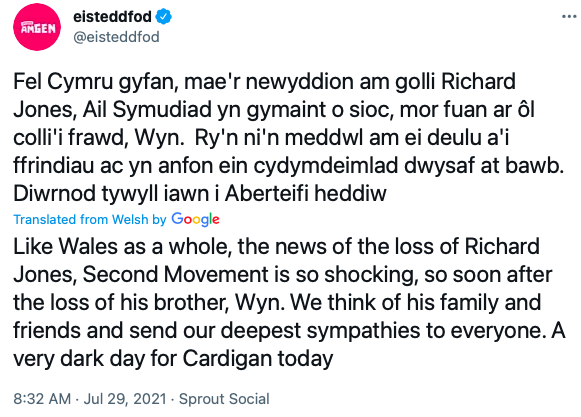 The brothers helped several generations of Welsh bands find their feet with their record label Fflach and its offshoot Rasp, which gave a guiding hand to new and emerging artists such as Y Ffug, Bromas, MC Mabon and Swci Boscawen.

The brothers were also rewarded for their long-standing commitment to Welsh music when they were admitted to the Gorsedd at the 2017 Anglesey National Eisteddfod.

I’m really sorry about Richard’s passing, only a month after the death of his brother. They owned Fflach, a Cardigan record company and studio; they (and Ceri Rhys Matthews, musician with the charismatic band, fernhill) released wonderful theme albums of many Welsh artists which included fiddle, diatonic accordion and concertina, triple harp and crwth. I went to Cardigan to record two tracks on a compilation album, ‘Megin’; Richard’s sincerity and enthusiasm were truly memorable. A good man gone… rest in peace.

Played in Ail Symudiad for 5 years. Best years of my life, with a wonderful set of brothers and all the Welsh music family. Although i am English i was always welcomed with open arms. Sad, sad tmes.

Very sad news 🙁 I worked with them back in the day when they had just started. May their memories be a blessing.