Bangor University researcher to investigate ‘When did the people of Wales become Welsh?’ 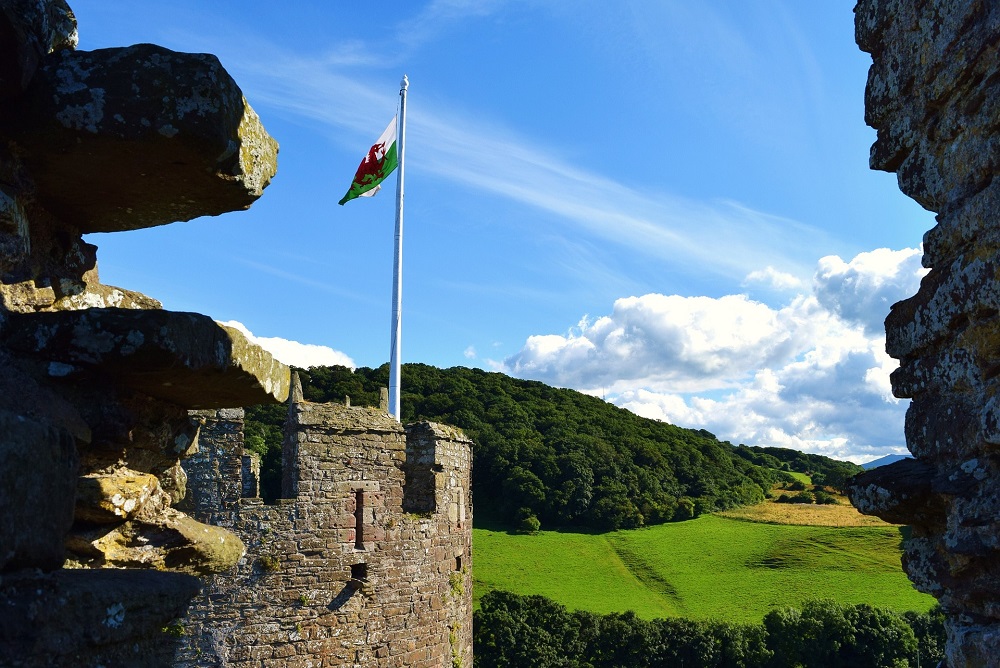 A medieval historian at Bangor University has been awarded a prestigious British Academy Postdoctoral Fellowship to research the development of Welsh identity in the Middle Ages.

Dr Rebecca Thomas will look at when references are found to an idea of Wales and the Welsh, and why. She thinks that suggestions of a Welsh identity can be found as early as the ninth century.

She will be turning to medieval Latin chronicles and histories to find evidence for how Welsh identity was constructed, and will also be looking to the wealth of evidence from the surviving writings of the Welsh poets, to see how they described the country and its people.

When Asser, a scholar from St David’s, writes in 893 that the eighth-century king Offa had built a dyke between Mercia and Britannia from sea to sea, for him Britannia is Wales, a geographical unit defined by Offa’s dyke.

When Nennius, a ninth-century scholar from Gwynedd, includes place-names in both English and Welsh in his Latin text, he refers to Welsh as ‘our language’. Ideas of a shared language, history, culture and territory are thus all important factors that need to be considered.

“I’m interested not only in when the Welsh emerged as a people, but why that is,” Rebecca explained.

“The early Middle Ages, especially the ninth and tenth centuries, was a key period in the construction of identities. If you look at the chronicles and histories being written in this period, they are preoccupied with dividing the world into different peoples and pinpointing origins for these peoples.

“Medieval writers claimed, for example, that the Welsh had come originally from Troy. Envisaging Trojan origins for a people was an idea that was highly popular on the Continent – the Franks also saw themselves as descended from the Trojans, for example – and so Welsh writers were tapping into a much broader phenomenon.

“It seems likely, too, that they were very much aware of how texts produced in other parts of Britain were beginning to talk of England and the English.

“I want to ask how important contact with the wider world was in shaping Welsh identity in this period, and to think about what Welsh writers thought set the Welsh apart from other peoples. What made the Welsh a people in their eyes?”

Dr Rebecca Thomas is one of only 53 early career researchers to be awarded a British Academy Postdoctoral Fellowship and is the second person ever to be based at Bangor University with this award. She joins the University’s School of History, Philosophy and Social Sciences from Cambridge University.

She said: “I’m delighted to be joining a School with such a long tradition of expertise in medieval Welsh history, and am excited to be working as part of an academic community that has contributed so much to our understanding of Wales in the Middle Ages.

“I am looking forward to sharing my research with the academic and wider community.”

Huw Pryce, Professor of Welsh History, said: “I am so pleased that Rebecca Thomas has joined us in Bangor. Her receipt of this highly competitive British Academy fellowship is a recognition both of her outstanding achievements as an early-career scholar and of the University’s strengths in medieval Welsh history.”

Of course, an interesting thought would be that if the English tribes hadn’t invaded Britain we might still have ended up with different countries but speaking different dialects of old British like Cornish. We could have had Estuary Welsh and Geordies would sound even more like people trying to imitate a Welsh accent. Perhaps the whole of England would now be called Cumbria.

An interesting scenario! I studied ‘the search for the welsh identity at Coleg y Drindod, Caerfyrddin in ’87, even then we discussed much deeper roots. Be careful though haven’t you heard Richard Osman says we are not even a country.

Richard Osman said that Wales is not a U.N country and he’s correct. If it helps you cope with that chip on your shoulder John I’ll point out that England isn’t either.

We are not ‘yet’ a country recognised as independent by being a member of the UN in our own right.
We will be in the future so Richard Osman’s argument is really ‘Pointless’.

In an alternate timeline, perhaps the various Anglo-Saxon groups could have arrived, but failed to impose their language, and within a couple of centuries are speaking British. However maybe there are English Gaeltacht-like areas in parts of Lincolnshire, Norfolk and Suffolk. In our world, it could be that the core of Brittania was weakened in some way around the time of the Anglo-Saxon invasions. Why 536 was ‘the worst year to be alive’. This might go towards explaining how the English language and cultural affiliation came to dominate, wheras in later times, English took centuries to predominate when the English… Read more »

I’m the other or alternative Huw D. I tend to get a bit fed up with this focus on “when did it all begin” and “how did we get here”. More relevant is the fact that we are here despite efforts to supress the language, culture, the entire identity mix. Much more energy should be invested in creating pathways to a strong assertive future identity. The past is a mix of history, myth and downright fib.

Cymru’s past and future are equally valid, surely? The research outlined here is a useful antidote to Gwyn Alf Williams’s ludicrous assertion that Welsh identity only began with the industrial revolution. But it’s certainly true that independent countries can better afford the luxury of exploring their origins and their pasts than a country long-denied its independence, so your point has some validity, and certainly the drive for independence is not predicated on a detailed understanding of Wales’s origins as an identifiable nation; Welsh people are aware of their Welshness without having that detailed knowledge, anyway. This article relates to academic… Read more »

sorry Rhosddu, my reading of Gwyn A Williams – ‘When was Wales’ is that Wales has needed to continually re make itself which it has been doing from at least the 9th century and even earlier “Wales is born in AD 383 with Macsen Wledig” WWW (1985 ed) p 20 – the political situation has meant it has continued to re-create its identity -the 19th century was one of those times – I would think it is doing this again today

Quite right. That’s a much more accurate (and fair) interpretation of his thesis. During industrialisation, “The Welsh created a new identity for themselves, yet again”. Can’t think why I didn’t pick up on that.

You all have valid points of view, and I thoroughly enjoyed reading them. “Alternative Huw D, ” all nations fit that bill, especially the fibbing, why should we be any different ??btw brought up in 50’s & 60’s in Cwm Gwendraeth , all I can say is I envy you being taught our history. History was my favourite subject, but only got taught kings and queens and how the globe was painted red…? ?

Pedr, I had the same jingoistic Anglo crap dumped on me not very far from your patch. There might have been a token gesture towards Hywel Dda ( Whitland boy, you see ), 2 Llewelyns ( bur really North Wales and a bit remote from us down here), and poor old Owain was relegated to bandit status. The worst myth of all was that Harri VII was a good old Welsh boy and after that no problem ! Now that is a cracker of a fib !

Cyffrous ..how exciting. Sounds like a great piece of research. Llongyfarchiadau and good luck to Rebecca Thomas .. look forward to hearing about her discoveries…. Knowledge of the past helps to inform the future…

Would like to see the Romano-British aspect of Welsh identity challenged personally! Cunedda was sent to Wales to push out the Irish there (and clearly failed if Dyfed and Brycheiniog are anything to go by) yet in most contexts he’s seen as a liberator rather than a conqueror. Strangely Merfyn Frych… who came across the Irish Sea much like the Irish before him was seen as an “Oppressor”. I think there’s a lot of revisionism going on around those times and afterwards by “disappearing” the Gaelic identity of people in the coastal areas of Wales. Even Hywel Dda himself supposedly… Read more »

Anyone got an opinion on when the Celtic languages arrived in Britain and Ireland?

I suspect 500BC is a bit too recent. St. Michael’s Mount in Cornwall has an alternative Cornish name of Karrek Loes y’n Koes – The Grey Rock in the Wood

The woodland last extended across what is now the intertidal zone around 3000BC.

Peter Forster and Alec Toth estimated in their paper Toward a phylogenetic chronology of ancient Gaulish, Celtic, and Indo-European the ‘arrival of Celtic in Britain at 3200 BC ± 1,500 years‘

Fascinating subject. So little is known on exactly how britain became dominated by the anglo saxons and that wales survived as a linguistic unit. I look forward to discoveries.